Logan Sargeant: “I’ve been Giving it Everything to Prepare for this Year” 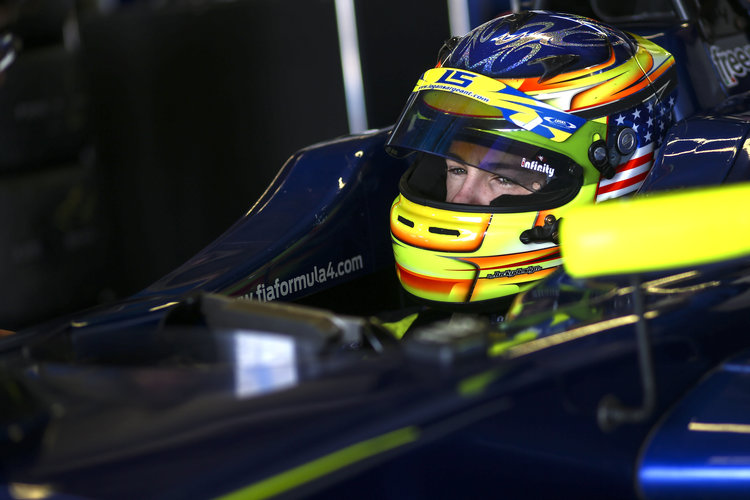 For many on the ToCA package, the name Logan Sargeant will be a new face. While a few may not be aware of the American’s past, he could easily be a championship contender despite it being his first year in the F4 British Championship.

The 16-year-old joins the Carlin team, taking on the mantle of the #31, the same combination that has claimed the last two British crowns. Sargeant though doesn’t feel the pressure, insisting he’s ready for the championship hunt.

“I’ve just got to give it my best. We’re going to never give up.” Sargeant stated.

Over the last few years he’s been a familiar in the World Karting Championship, as well as number of other European and International series. He took the KF Junior World title in 2015 and moved over to the OK category last year. Despite his excessive experience he’s been slow to adapt to the new single-seaters.

“Well Karting is very different to cars in many ways. Karting can almost be irrelevant later on. It’s always good to do well, but once you get in the car it’s a whole new world.

“All the racing aspects are pretty different. Obviously, at a race track you need to relearn how to overtake someone and other small stuff like that. With British F4, it’s good to get lots of track time during testing, which helps when you move up the ladder.”

Sargeant, who felt the extra year in karting ‘matured’ him, made an immediate impact during his racing debut in UAE Formula 4 last year. He spent the winter in the category, finishing runner-up to teammate Jonathan Aberdein, with fifteen podiums.

“In the UAE we were certainly quick, but were also a bit unlucky at times. I had an experienced teammate alongside me who had already done a full year of racing, I was glad he was there as we pushed each other forward.

“I definitely improved in myself a lot during that championship. We learned so much race craft in the UAE, and I hope that helps me going into British F4. I’m glad I had that opportunity in the series.”

Sargeant (#23) finished runner-up in UAE F4 with 15 podiums, but despite his success, failed to record a single win, regularly finishing behind teammate and eventual champion Jonathan Aberdein (#25) (Credit: UAE Formula 4)

Joining him during his desert adventure was Oscar Piastri, who teams up with Carlin’s key F4 rivals TRS Arden, though the American was adamant that results will not be directly transferred.

As for his own team, Sargeant was just as sure that he wouldn’t benefit from comparing himself too much with his rivals inside the garage.  Of these drivers, most notable would be Jamie Caroline, who like Sargeant topped two pre-season test days.

“I’m not really worried about the others, I’m going to go out and win races and be consistent. If I were to say, the biggest rivalry in the team will be between myself and Jamie Caroline.

“That’s not what I’m focused on though, I need to go out, get the wins and not make many mistakes, that’s how I’m going to win the championship.”

Sargeant though is no stranger to the continent though, having lived in Europe for the last few years. Hoping to develop, first his karting profile and now his single-seater image in an environment where he feels he can flourish.

“European karting was where we wanted to go and it was about getting used to living here and getting ready for car racing.”

His brother, Dalton Sargeant competed in the ARCA Racing Series last year, though Logan respects his brothers decision he states that he has no immediate plan to following Dalton back to the US.

“It’s always an option. We’ll never abandon America, but it was better to move to Europe.”

Sargeant continued to show his pace during the Rockingham test, in which he was a regular pace setter. The question will be, whether testing speed can relate to actual race results (Credit: JEP)

Sargeant is happy for what he’s achieved in testing so far, with his last race under a month ago, he feels that race craft will be on his side going into the opening round at Brands Hatch.

“I’ve been giving it everything to prepare for this year. I’ve been training non-stop, the most I’ve ever done in my life, making sure my bodies in the best physical position it can be in.

“I’ve been doing lots to prepare for the first race, including with the car testing and my last race was quite recent. I’m feeling confident, knowing my race craft is still fresh in my mind. I’m prepared for the challenge.”

He got involved with the Carlin team through his connections at Infinity Sports Management, admitting that the team and the championship was best strategy for his career. “They’ve had so many successful drivers, including Daniel Ricciardo and Sebastian Vettel. It was the best option so that’s what we decided.”

As a driver who is already well-versed to testing on the international stage, Sargeant sees the British circuits as a unique challenge, but one that will be essential for young drivers like himself.

“They’re tighter, more narrow, a lot less room for error, you need to be on it. I think it’s good, while I won’t race them [the circuits] moving forward, it’s good to have experience of such hard tracks. It helps us push the limit without going over it.

“For example, if you make a mistake at Oulton Park you’re going to be in the wall. It teaches you how to be more consistent, on the limit and not make a mistake, which certainly helps a lot moving forward.”

Like many young drivers though, ‘moving forward’ will see the 16-year-old aim for Formula One, but he’s more focused on the current year, leaving future decisions up to himself later, depending on results.

“We’ll see how the year goes. The main aim is to win the championship and that’s what we want, but if it doesn’t happen it’s not the end of the world. We’ll move on, take a step forward and we’ll see what comes our way, playing it by ear.”

Logan Sargeant will go into the season with a lot of pressure to perform straight out of karts having only had the winter to get used to single-seater racing. (Credit: JEP)

While it seems unlikely Sargeant will stick around for more than a year in the series, he’s lining himself up to be a key championship player this season. Like Lando Norris, he could be a name the fans will remember for years to come.

Either way the omen is there for Sargeant to take control. Like Norris, he comes into the championship off the back of a KF World Karting title and a year in racing where he finished as the highest placed rookie. In the words of Sargeant himself;

“Going into the season open-minded, be aware of those around us and try to get some wins.”