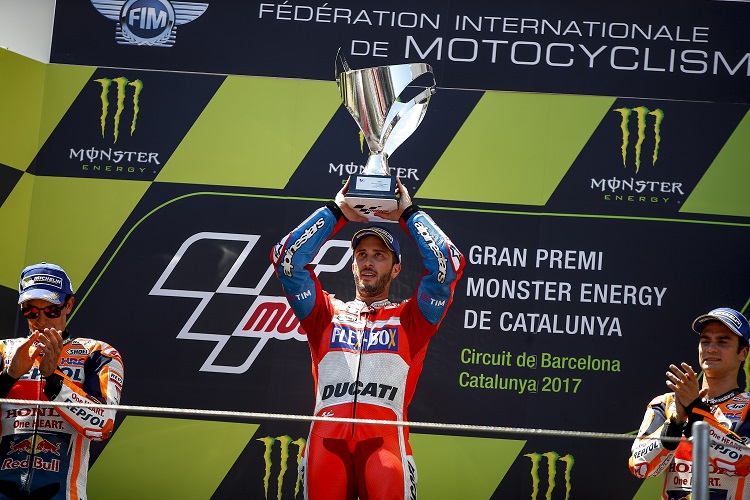 Andrea Dovizioso claimed back-to-back MotoGP victories for the first time in his career to propel himself into title contention in Barcelona. The Italian handed Ducati consecutive wins for the first time since Casey Stoner in 2010 and with Maverick Vinales an uncompetitive tenth, Dovizioso is now just seven points off the championship lead.

Tyre wear was expected to play a key role in the Grand Prix on the notoriously low-grip Catalunya circuit but Jorge Lorenzo had no concerns in the early laps as he stormed past polesitter Dani Pedrosa for the lead. The five-time champion had five riders for company though and the floodgates opened on lap six as Marc Marquez deprived him of the lead, bringing Pedrosa and Dovizioso through with him.

Pedrosa pounced immediately to grab the lead from his team-mate on lap eight but it quickly became apparent that Dovizioso had superior race pace over the Hondas, regularly easing off down the home straight as he bided his time and conserved his rubber. With nine laps to go, Andrea pulled the pin, blasting past Pedrosa on the home straight and easing away to a fourth career victory in the premier class.

Marquez overhauled Pedrosa for second with Lorenzo rescuing fourth despite falling as low as eighth at one stage. His late revival came at the expense of the two Tech 3 Yamahas who were left to battle each other for fifth. Johann Zarco ultimately got the better of Jonas Folger despite the German having run with the leaders early in proceedings.

Alvaro Bautista completed a fine weekend with seventh while Valentino Rossi salvaged eighth for Movistar Yamaha at the end of a turbulent Grand Prix for the team. Vinales had been languishing in fifteenth for much of the race but looked set to claim ninth after Danilo Petrucci had crashed out of fifth, only for Hector Barbera to edge him out on the final lap.