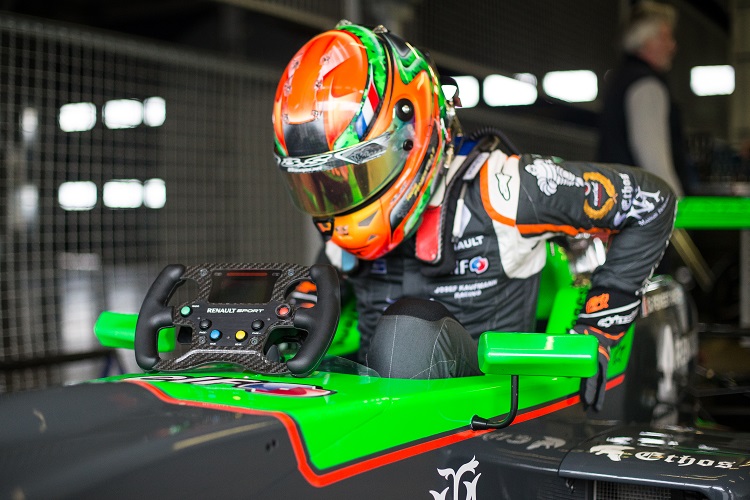 Sacha Fenestraz was fastest in both Collective Test sessions at the Hungaroring on Friday - Credit: Antonin Vincent / DPPI

Sacha Fenestraz set a new track record for a Formula Renault 2.0 car around the Hungaroring on Friday as the French-Argentine driver topped both collective test sessions for Josef Kaufmann Racing.

Fenestraz, who sits third in the Eurocup championship standings after taking victory around the streets of Monaco at the end of May, was quickest with a time of 1:40.838s during the first session of the day in Hungary, but lowered that time to a 1:40.244s in the afternoon to pace the thirty-car field.

Two red flags affected the first session, with both Presley Martono (Mark Burdett Motorsport) and Ghislain Cordeel (Arden Motorsport) stopped on track, but Fenestraz did not let the interruptions affect him to lead the way ahead of R-ace GP’s Max Defourny by 0.004 seconds.

Robert Shwartzman was Fenestraz’s closest rival in the afternoon, with the R-ace GP ace 0.190 seconds behind, while Ye and Aubry were third and fourth ahead of Arden Motorsport’s Daniel Ticktum and R-ace GP’s Will Palmer, the current championship leader.

Qualifying for race one takes place on Saturday morning, with the race to follow that afternoon.

By Paul Hensby
4 Mins read
Victor Martins and Caio Collet were again the drivers to beat at Zandvoort, with each taking a win and a second place at the Dutch circuit.
Formula Renault Eurocup

By Paul Hensby
3 Mins read
Caio Collet and Victor Martins shared the victories at Magny-Cours to pull away from the chasing pack in the 2020 Formula Renault Eurocup standings.