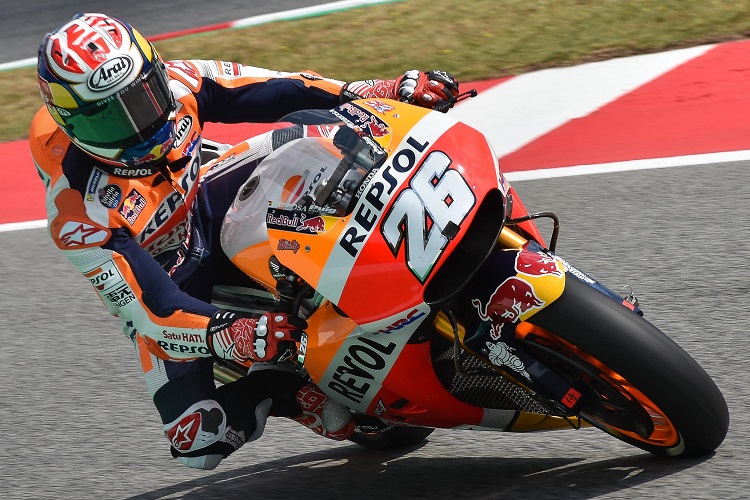 Dani Pedrosa will start the Catalunya Grand Prix from pole position with high temperatures and a low-grip track surface leading to a mixed-up grid. Pedrosa saw off compatriot Jorge Lorenzo to take pole with championship leader Maverick Vinales only ninth and Valentino Rossi even further back in thirteenth after dropping out in Q1.

Because of the circuit changes, Saturday morning’s FP3 was the only session to set the field for Q2 and all four Yamahas in the field came unstuck, Vinales and Rossi joined in Q1 by the two Tech 3 rookies. Cal Crutchlow was another big name in the first session and a crash put paid to his Q2 chances, the Briton forced to start tomorrow’s race from seventeenth.

Jonas Folger ultimately upstaged his factory counterparts after clocking a 1:44.239 to top the session, four tenths clear of Vinales who narrowly edged Rossi out for second. Johann Zarco’s one-run strategy didn’t pay off on this occasion as he failed to match his team-mate, leaving him fourteenth on the grid behind Rossi.

Honda riders were expected to shine but Marc Marquez was having a messy day. Having crashed in FP3 and again in FP4, the world champion proceeded to fall twice more in the pole position shootout, once on each run, which restricted him to fourth position on the grid. Pedrosa, who tumbled himself late in FP4, was error-free when it matter and his 1:43.870 earned him a second pole of 2017.

Jorge Lorenzo took his best qualifying result for Ducati with second after setting a 1:44.201 on his first run while Danilo Petrucci backed up his Mugello rostrum with a first ever front row start. Marquez heads the second row with Aprilia’s Aleix Espargaro and Avintia’s Hector Barbera impressing to qualify fifth and sixth respectively.

Andrea Dovizioso starts seventh with Q1 qualifiers Folger and Vinales alongside while Alvaro Bautista rounds out the top ten.