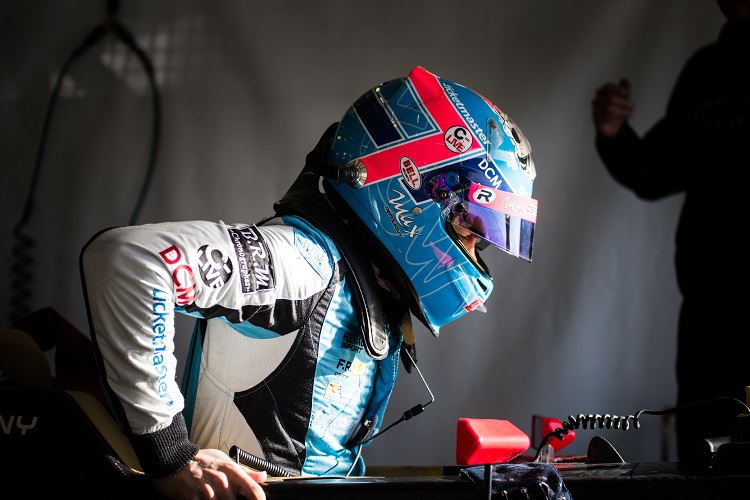 Max Defourny has five podiums but no wins in 2017 - yet! - Credit: Antonin Vincent / DPPI

Max Defourny finished second to R-ace GP team-mate Robert Shwartzman in race one at the Nurburgring, but admitted he always struggled to get close enough to pass other drivers at this circuit.

Starting from second on the grid, Defourny attacked Shwartzman at the start but was unable to make the move stick, and from there on in trailed the Russian driver, ultimately finishing 0.615 seconds back, although he was never close enough again to attempt a pass for the lead.

“I got away well at the start but then backed down a bit too much,” said Defourny. “I was still able to get next to Schwartzman in the first couple of corners but I wasn’t able to fully complete the move.

“I struggled a bit with the temperature of my tyres but when that improved I managed to catch up with him again. At this track it has always been difficult for me to get close to the car in front; the dirt on the track affects the balance and makes it hard to stay close enough to overtake.

“My rears locked up a little in the last two laps, so I lost a bit of time there. I had the pace again but unfortunately, it wasn’t enough to finish on top.”

Defourny recovered from a spin in wet conditions during Sunday morning’s second race, with the Belgian spinning to avoid a crash with team-mate Shwartzman. He dropped down to ninth as a result of the spin, but despite having limited laps to do anything about it thanks to the safety car, he was able to move back up to sixth at the chequered flag.

“Race 2 took place in wet conditions,” said Defourny. “I like driving in the rain, I have always been quick. So in this race, after the first safety car phase, I managed to make a move on Shwartzman at the outside of Turn 5.

“I started catching up on the field but Shwartzman was able to come around me again. In order to avoid contact between the two of us, I ended up spinning and lost positions.

“In the final race phase, I managed to make up a few positions. In the end, I earned some good points and the spin didn’t affect my final result too much.”

Defourny still has not won a race in 2017 but has finished on the podium five times, and the highly rated Belgian wants to rectify that statistic sooner rather than later, preferably this weekend at the Red Bull Ring.

“Overall, the weekend wasn’t too bad,” admitted Defourny. “My pace has been good and I earned some valuable points. I still haven’t won this season even though the potential for a win has always been there, so it is a bit frustrating that it hasn’t happened yet.

“The next event is at the Red Bull Ring where I was fast last year, so it is my target to finally win a race then!”

By Paul Hensby
4 Mins read
Victor Martins and Caio Collet were again the drivers to beat at Zandvoort, with each taking a win and a second place at the Dutch circuit.
Formula Renault Eurocup

By Paul Hensby
3 Mins read
Caio Collet and Victor Martins shared the victories at Magny-Cours to pull away from the chasing pack in the 2020 Formula Renault Eurocup standings.