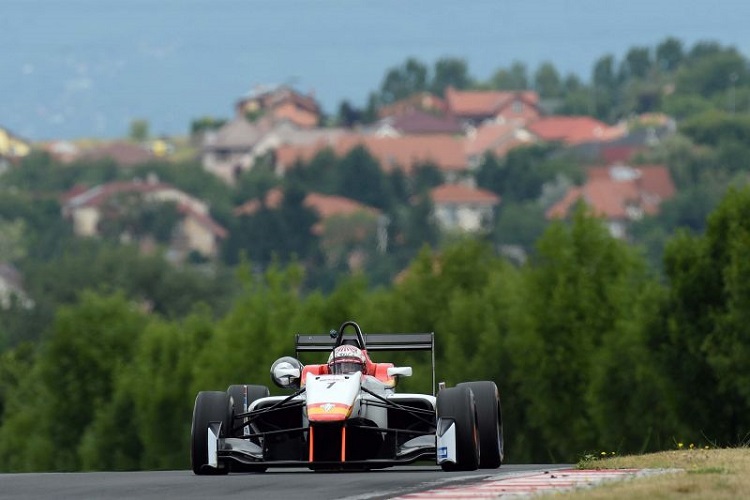 Raoul Hyman continued his strong start to his EuroFormula Open career as he led a Campos Racing 1-2-3 in qualifying for race one at the Hungaroring on Saturday.

In a session that started with drivers on wets, the best lap times were reserved for after a red flag period, caused when Pedro Cardoso crashed his Teo Martin Motorsport machine at the top of the hill, with drivers able to make the switch to dry tyres as the track had dried enough to warrant the move.

Hyman, who had gone into the final stages at the very back of the field after having no fewer than SEVEN lap times up-to-then deleted due to track limit offences, came good when it mattered, setting a best time of 1:38.069s to take his maiden pole position at the very first time of asking.

Harrison Scott set the second fastest time of the session, but the RP Motorsport driver saw that time deleted, meaning the current championship leader and the winner of five of the first six races of the season has it all to do in this afternoon’s race, starting as he is down in fourteenth position.

Inheriting second place on the grid therefore will be Campos Racing’s Simo Laaksonen, albeit more than half-a-second down on Hyman, while Thiago Vivacqua made it a good session for the team to qualify third on the grid, ahead of RP Motorsport’s Alex Karkosik.

Jannes Fittje will start fifth for Fortec Motorsports ahead of Drivex School’s Nikita Troitskiy, while Carlin’s Ameya Vaidyanathan, the only other race winner in 2017, is only seventh ahead of Campos’ Matheus Iorio, Carlin’s Tarun Reddy and Fortec’s Petru Florescu.

Another driver to fall foul of track limits was Carlin’s Devlin De Francesco, who’s best time of 1:39.547s was deleted, meaning he will start at the very back of the field this afternoon.