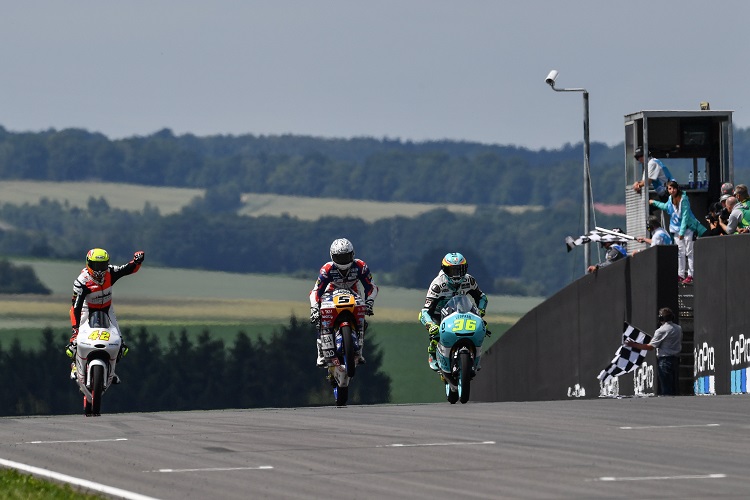 Joan Mir stamped his authority on the Moto3 championship battle with victory over Romano Fenati at the Sachsenring. The Spaniard made the decisive move at the penultimate corner to take his fifth win of the year and with his other title rival Aron Canet crashing out, Mir heads into the summer break with a 37 point advantage.

Canet had shocked Mir with a last ditch effort to grab pole position on Saturday but once he had been outdragged on the approach to turn one, the Estrella Galicia rider never had the pace to back up his qualifying performance. Having fallen to thirteenth at one stage, Canet was struggling to minimize the damage to his championship challenge but a crash at turn twelve saw him leave Germany empty handed.

A leading group of five pulled away at the front with Mir and Fenati joined by a pair of KTMs as Marcos Ramirez and Nicolo Bulega gave chase. The surprise contender at the front was SIC58 rider Tony Arbolino with the 16-year-old rookie matching the leading pace but any hope of a career-best result disappeared in unfortunate circumstances with a painful highside at turn three.

With Bulega fading in the closing stages, the fight for victory became a three-way scrap and Fenati looked to have made the decisive move at the end of the penultimate lap, outbraking Mir into turn twelve. Once again though, the Leopard rider had the superior tactics and handed Fenati a dose of his own medicine, diving up the inside at the same corner on the last tour to secure victory.

Ramirez crossed the two tenths back in third to claim his maiden Grand Prix podium while Bulega came home a lonely fourth. Home favourite Philipp Oettl finished fifth ahead of Enea Bastianini and Livio Loi while Bo Bendsneyder put the disaster of his home race behind him to take eighth, edging out Tatsuki Suzuki and Darryn Binder.