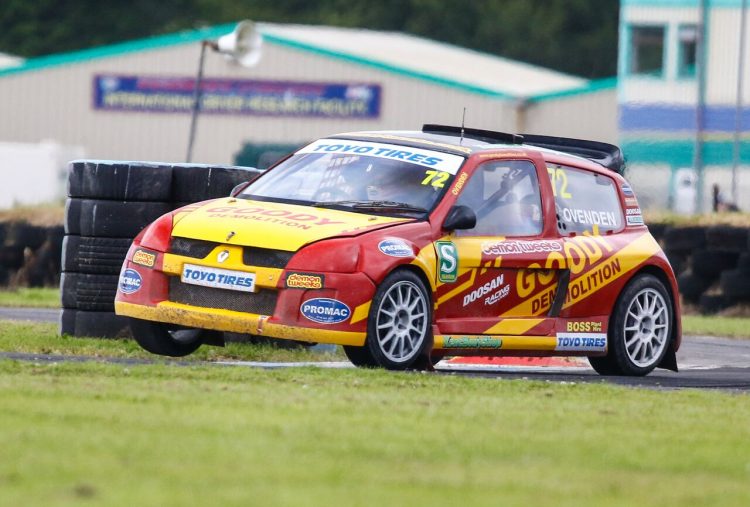 A strange feeling for MSA British Rallycross Supernational racer Tristan Ovenden at Pembrey: the Renault Clio driver was looking to leave behind the bad luck that affected him on the previous two rounds, including his home race at Lydden Hill.

Ovenden’s near-perfect qualifying (he was fastest in Q1 and Q3, and second in Q2 by the narrowest of margins) precisely mimicked what happened on the past events, and his hard work was then rewarded with pole position on his semi-final. His masterful driving skills allowed him to win his race by a whopping 25 seconds.

A perfect launch from pole on the grid for the final granted him the lead on his way to turn one. Ovenden then was pushing hard to extend his lead, but as he entered the gravel section, he spun, losing lots of precious time and ending up straight at the back of the field. His determination, though, was so strong that he posted the two fastest laps of the race, on his way to clinching second place by the final lap. At that point, exiting the final corner, it all became a drag race to the finish line. From a spectator’s point of view, the winner wasn’t clear, but according to timing instruments, Ovenden finished second to his female rival Paige Bellerby by less than one hundredth of a second, in what is certainly one of the closest finishes in the history of British rallycross.

Thanks to his astonishing performance, Ovenden is now joint second in the Championship, with six rounds still to go.

“I’m not sure what happened, I’d been really careful through that part of the track all day and I didn’t think I did anything particularly different, but it got away from me that time, so we’ll have to put that one down to driver error, he says.

“So that small mistake on the first lap ultimately cost us the win, but it made for a great race and it was good fun catching up and almost stole it at the line! The team worked really hard all day to keep the car in trim and it’s good to get some decent points on the board.”

By Mark Cridland
7 Mins read
Heaps of sunshine, loads of spectators and plenty of drama all led to a great round two of the British Rallycross Championship at Lydden Hill on Bank Holiday Monday.