Kyle Busch has qualified on pole position for today’s Monster Energy NASCAR Cup Series I LOVE NEW YORK 355 at the Glen. The #18 Joe Gibbs Racing Toyota Camry driver put in a monster of a lap in the second session of qualifying to bag pole position, his third consecutive pole position after starting at the front in Pocono and Indianapolis.

For the first session of the two round qualifying at Watkins Glen, the battle for pole position looked as though it was going to be close. The Goodyear rubber continued to be laid down onto the racing surface throughout, allowing for many different drivers to hit the top of the time sheets at various times. Chase Elliott would top the first session and was the only driver to lap under the 70-second barrier.

The competition was all but ended soon after the second session began. Kyle Busch was one of the first drivers out on track in his M&M’s Camry and, such was the speed of his lap, there was no need for him to come out again. Kyle put in a scarcely believable 1:09.490 to sore to the top of the time sheets where he would remain for the rest of the session.

His closest competition would come in the form of Kyle Larson in the #42 Chip Ganassi Racing Chevrolet who qualified in second place, but there was a gap of four-tenths of a second between the pair on the front row:

“It was a really good lap for us and being able to have a fast race car and hit all the marks right to put us that quick out in front of the field feels good,” said Busch post-qualifying. “The guys have done an amazing job and continue to do so and hopefully we can keep ourselves in the right position to try and win another one today.”

Martin Truex Jr continued to show the road course speed in his #78 Furniture Row Racing Toyota in third place, but he was unable to break the 70-second barrier like the pair on the front row had done. Elliott will line-up alongside Truex on the second row, with the #24 Hendrick Motorsports Chevrolet driver unable to replicate his sub-70-second lap that he put down in the first session.

Row three of the grid will be an all-rookie affair, with Daniel Suarez and Erik Jones qualifying fifth and sixth respectively on their first outing at the Glen in Cup series cars. Road course specialist AJ Allmendinger has been struggling with the #47 JTG Daugherty Racing Chevrolet, but he managed to sneak through to the second session by just a fraction of a tenth and went on to take seventh place. 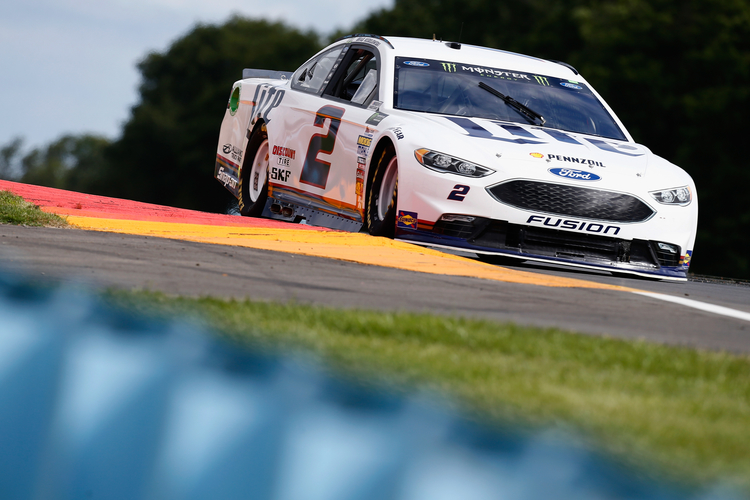 Brad Keselowski will line-up eighth in the #2 Team Penske Ford and will be hoping to battle Kyle Busch for the win like he did in yesterday’s XFINITY Series race at the Glen. Jamie McMurray lines up ninth alongside Jimmie Johnson, with Denny Hamlin and Clint Bowyer completing the top twelve who advanced through to the second session. Neither Hamlin or Bowyer set a lap-time in the second session. Both drivers suffered brake issues in the second session. Bowyer’s were overheating after his lap in Q1, whilst Hamlin lost his brakes altogether.

Joey Logano just missed out a spot in the top twelve shoot-out. He was under a tenth below the cut-line when the session came to an end, but the #22 Team Penske driver remains upbeat after having won at the Glen in 2015 despite starting from sixteenth. Michael McDowell will line up alongside him in fourteenth, with the #95 Chevrolet driving blaming himself for not being able to make it through to round two.

The two remaining Hendrick Motorsports and the two remaining Stewart-Haas Racing drivers were unable to join their team-mates in the second round. Kurt Busch, Kasey Kahne and Kevin Harvick will all line-up line astern in positions eighteen through twenty, with Danica Patrick twenty-fifth and Dale Earnhardt Jr down in twenty-eighth. Dale Jr was suffering with chronic handling issues, strangely at the top of the hill at turn four which is usually easily flat-out.

Further back, road course veteran Boris Said qualified his #33 Circle Sport Chevrolet in the thirty-fifth position. Boris is making his final ever start in the NASCAR Cup Series this weekend and will be driving a backup car after damaging his primary in practice on Saturday.

The Monster Energy NASCAR Cup Series field will be back in action later today for the 90-lap I LOVE NEW YORK 355 at the Glen.

*Both Denny Hamlin and Clint Bowyer qualified for the top twelve shoot-out for pole position, but neither set a lap-time.