Pedrosa: “One of the Worst Days of the Year” 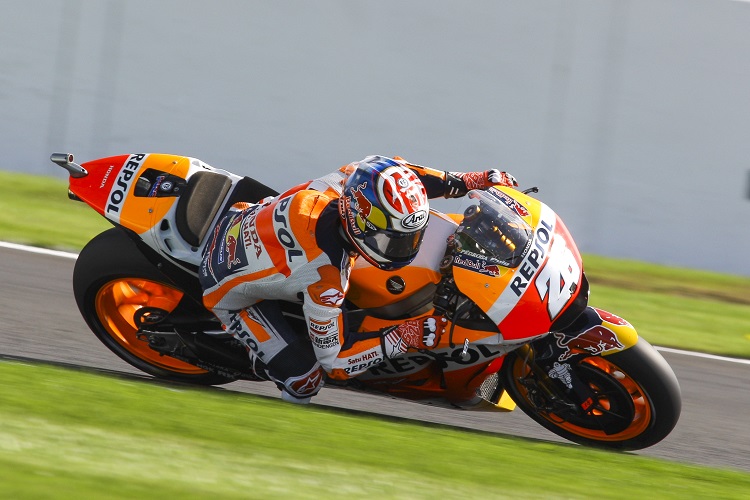 Dani Pedrosa remains hopeful that he can recover to challenge the frontrunners in this weekend’s British Grand Prix despite what he described as one of his worst days of the year at Silverstone. The Spaniard appeared to suffer more than most over Silverstone’s increasingly bumpy track surface, leaving him a lowly seventeenth and outside Q2 as it stands.

With only one practice session remaining to secure an automatic spot in the pole position shootout, Pedrosa is now on his back foot and although he was understandably downbeat, the Repsol Honda rider still hopes to bounce back on Saturday.

“Today I had a pretty difficult day in general. I had a lot of problems on the bike, struggling with the bumps and stability on the track. I couldn’t fully control the bike and it was shaking all around and it was moving so much, I couldn’t see the track. Not one lap was fine and we didn’t improve from FP1 to FP2 unfortunately so we are looking with the mechanics to see what we can do tomorrow.”

As one of the lightest riders on the grid, Pedrosa may be more susceptible to bumpy tracks than others and he admitted his negative opinion of the surface may not necessarily be shared by others.

“As soon as I touch one bump, the bike is crazy and the problem just gets bigger after the first shock. It just keeps moving. It’s difficult to keep the throttle open, it’s difficult to keep the rear wheel down. Today was very hard, one of the worst days of the year, but the last races we had good pace so we need to see if we can recover the speed. For me, the track needs new asphalt but the opinion might be different from the riders at the top!”