This weekend, the Monster Energy NASCAR Cup Series heads back to Michigan International Speedway for its second visit of the year; this time, for the Pure Michigan 400.

Michigan International Speedway see’s the NASCAR Cup drivers hit the highest speeds that they reach all season. That may seem bizarre considering that the Superspeedways of Daytona and Talladega are flat-out, but the cars at those rounds are fitted with restrictor plates that lower the top speed. Michigan doesn’t have these plates, so cars are able to easily hit speeds of over 200mph when entering turns one and three.

There are just four races left, including this weekend’s race, until the championship playoffs begin at Chicagoland. With Martin Truex Jr winning for a fourth time last weekend at Watkins Glen, there are still four available positions in the championship contending sixteen for a new race winner to take. Are we going to see a new winner this weekend, or will we get another repeat? Let’s have a look at five picks for this weekend’s winner at Michigan.

One of the undebatable favourites heading back to Michigan has to be Kyle Larson. In his seven starts at MIS in the NASCAR Cup Series, Larson has had four top ten finishes. Within those, he’s had three victories. What’s even more ominous, two of those wins were in the last two races at Michigan.

Larson finally and memorably silenced his critics at the second Michigan race last year by taking his first NASCAR Cup series victory after a race-long battle with Chase Elliott. Up until that point, many had been wondering when Larson was going to win as he’d shown so much potential but been the bridesmaid so many times. Now, it seems as though Larson has figured it out.

Now would be a great time for Larson to get his fourth Cup series win. The year started off strong for the #42 Chip Ganassi Racing Chevrolet driver, with an incredible five top two finishes in the first seven races, but his results have slowly started to dip as the series has gone on. A win in the immediate run up to the playoffs would put himself and his team on a good confidence level. Plus, if he wins this weekend, he’d be the first driver to sweep both races at one venue in a season since Dale Earnhardt Jr and Kevin Harvick managed it at Pocono and Phoenix respectively in 2014.

When Larson won his first race at Michigan last year, he passed on his bridesmaid baton to a new recipient. The last three races at Michigan have had the exact same top two; Larson first, Chase Elliott second. Elliott is now the driver that people are asking “when is he going to win?” It’s not hard to see why either. Despite being in only his second full season in the NASCAR Cup Series, Elliot has amassed twenty-nine top ten finishes.

With drivers such as Larson, Ryan Blaney, Ricky Stenhouse Jr and Austin Dillon all notching up their maiden Cup series victories within the last year, the pressure is now firmly on Elliott’s shoulders to get his first win. In 2016, late-race restart mistakes from Elliott cost him a chance at passing Larson for the victory in both races. This year, he just couldn’t find a way by the #42 as the laps ticked down. If he can find a way to get by Larson this time around, he could very well wind up in victory lane in a points-paying NASCAR Cup race for the first time and he will assure himself a spot in the playoffs.

Another driver who needs to notch up his first win of the season is Matt Kenseth. Matt is in a desperate position right now with the playoffs looming large. He sits sixteenth in the playoff standings, with sixteen drivers set to advance to championship contention. He is one of only three drivers who would make it through on points without a victory at this point.

Of course, his situation would be a lot calmer if he could get a win to all but guarantee himself a spot in the playoffs. He so nearly got that win last weekend, but Truex managed to conserve just enough fuel to beat him to the chequered flag. There’s every chance he could go one better this weekend though, as his Michigan record of twenty top tens and two previous victories is strong. 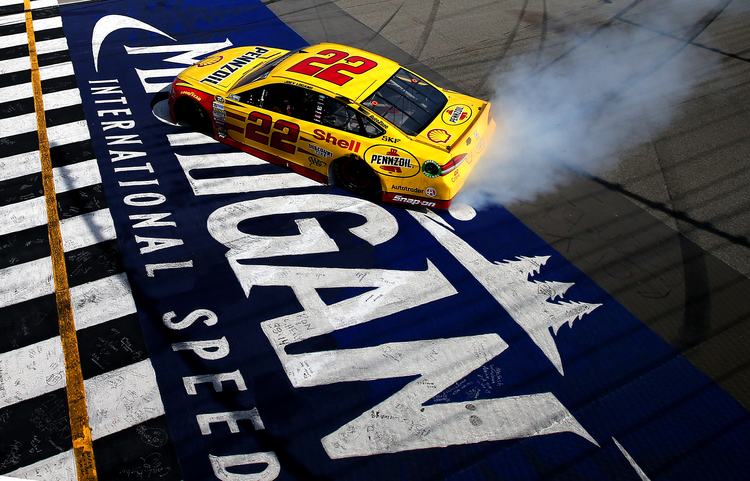 Whilst Kenseth is right on the edge, but still inside the top sixteen in the playoff standings, Joey Logano is just on the outside looking in. The driver of the #22 Team Penske Ford Fusion has taken a win this year at Richmond, which would normally give him a spot in the playoffs, but that win was encumbered due to problems found with the rear suspension in post-race technical inspection.

Due to that penalty, Joey needs another win to qualify for the playoffs. Michigan could be the place where he takes that win. He was the last driver to win at the track that isn’t called ‘Kyle Larson’ and he also has twelve other top ten finishes including another victory back in 2013. If he can grab his third Michigan victory, he’ll have another chance at contending for a championship.

My final pick for a potential race winner this weekend is Kevin Harvick. Thanks to his victory at Sonoma in June, the driver of the #4 Stewart-Haas Racing Ford Fusion is not in need of a win to qualify for the playoffs, but a win would help boost his and the team heading into the vital final ten races.

Harvick has taken fourteen top ten finishes so far this season as the team continue to get on top of the Ford Fusion having switched from Chevrolet pre-season. The speed seems to be there, but they just need a little more to be winning regularly. Harvick’s past record at Michigan could tip the scales in their favour, with fifteen top ten finishes, ten top fives and one victory at the track in his previous years in the Cup series. He may need a little luck, but if he’s given the opportunity, he’ll be hard to beat.

Last week at Watkins Glen, one of my picks went to victory lane. Will that be the case this time around? On-track action for the Monster Energy NASCAR Cup Series at Michigan International Speedway begins on Friday with first practice followed by qualifying later in the day. Saturday will see two further practice sessions, with the Pure Michigan 400 following on Sunday.