Just five races separate the 2017 Monster Energy NASCAR Cup series from the beginning of the playoffs; the ten races that will decide who wins the championship at Homestead-Miami Speedway in November. With the field so competitive so far this season, every one of the five remaining races will be crucial. This week’s race? Perhaps even more so.

This weekend, the NASCAR Cup series heads to its second and final road course race of the season, the I LOVE NEW YORK 355 at Watkins Glen International. The NASCAR Cup series has had a long history of competition at the 2.45 mile, eight-turn circuit in New York state; with the event being one of the most highly anticipated races on the schedule.

This year should be no exception. In the twenty-one races leading up this weekend, we’ve had fourteen different race winners; with all but Joey Logano‘s Richmond victory counting toward playoff qualification. With sixteen positions available in the playoffs for the championship, just three spots remain for drivers without race wins and Watkins Glen always has the potential to throw up a surprise winner.

So who has a shot at winning this weekend? Road Courses are one of the biggest challenges for a NASCAR Cup series driver and there’s always a few names that seem to rise to the top when tasked with turning left and right, upshifting and downshifting and curb hopping for ninety gruelling laps at the Glen. Here are my top five picks for this weekend:

AJ Allmendinger is perhaps your safest bet to make it fifteen different race winners this year. The #47 JTG Daughtery Racing Chevrolet driver has always been known as a road course ringer; with his sole Cup series victory coming at the Glen in 2014. AJ’s season could’ve gone better up to this point as he sits 27th in points, but a well-timed win this weekend would shoot him up into chase contention. Even if he doesn’t seal the victory, at least expect him to be up inside the top ten throughout the race; drama aside. 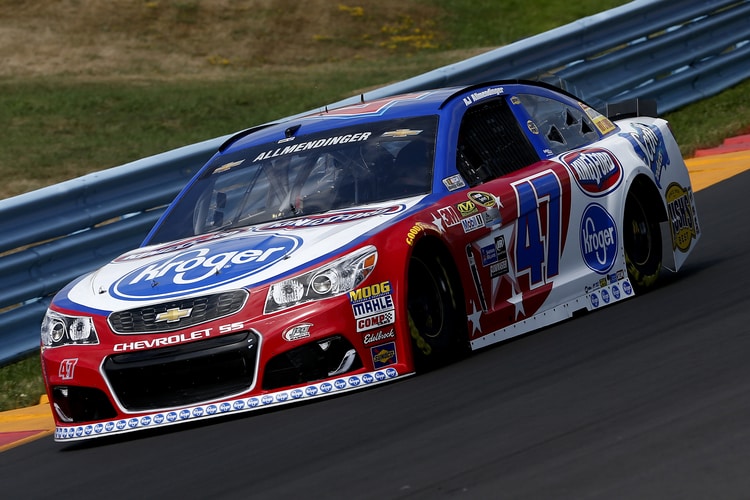 There could be another driver who has a shot at taking their first win of the year this weekend. Clint Bowyer has enjoyed a run of revitalized form since joining Stewart-Haas Racing prior to this season. Four top five finishes have come his way so far this season, including a second place finish at Sonoma back in June. Bowyer has shown an affinity for road courses throughout his tenure in the Cup series, however, with eight top five finishes and one race win coming his way since he entered the series full-time in 2006. Ford powered Stewart-Haas to a 1-2 finish back at Sonoma, there’s every possibility that they could power Clint Bowyer to his first victory in 170 races.

The Toyota drivers will likely be a factor this weekend also. It’s safe to say that the Joe Gibbs Racing Toyotas, in particular, have had a turbulent regular season, with their first two wins only coming in the last three races in the hands of Denny Hamlin and New Hampshire and Kyle Busch at Pocono last weekend. Now seems to be the time that JGR make their rise back into contention, however, as all four of their drivers continue to climb up the results sheets week in, week out.

Denny Hamlin, of course, is the reigning race winner at Watkins Glen after passing Martin Truex Jr for the lead late in the race one year ago. The #11 FedEx Camry driver has really shined at road courses over the last season and a half, with three top five’s out of three since the start of 2016. Hamlin very nearly swept both road course races last year but lost the Sonoma victory at the last corner after being moved out of the way by the now-retired Tony Stewart.

Another Toyota driver with a definite chance this weekend is not only the points leader, but he currently sits on top of the provisional chase grid with three race wins so far this year. Martin Truex Jr has arguably had his strongest season yet as he seems to constantly be in contention every week. Truex might’ve taken the victory back at Sonoma in June had it not been for a late-race engine blow up after having led the most amount of laps. Equally, he led much of the race at Watkins Glen last season before being passed late for the lead before being spun by Brad Keselowski on the final lap. With the #78 Furniture Row Racing Toyota seemingly strong no matter where they go, expect Martin to be in the hunt yet again.

My final pick for the win happens to be second to Truex in the points standings. Like Truex, Kyle Larson has also been having the season of his life so far in 2017. The #42 Chip Ganassi Racing Chevrolet driver has taken nine top five finishes in the opening twenty-one races this season and he looks as though he’ll be a force to be reckoned with once the playoffs begin. His speed hasn’t been confined to the ovals either, with the #42 driver taking pole position back at Sonoma before unfortunately being caught in the aftermath of an early wreck between Dale Earnhardt Jr and Danica Patrick. He also hit bad luck at the Glen a year ago when he was spun out of a top five finish by AJ Allmendinger on the last lap of the race. If Larson can put his previous bad luck at road courses aside, you can bet that he’ll be a factor as the laps wind down on Sunday.

Of course, in a season that has seen fourteen different race winners whilst frequent front-runners have fallen by the wayside, anything is possible and just about anybody could be in the hunt for the win. Monster Energy NASCAR Cup Series action starts on Saturday, August 5 with practice, with both qualifying and the race taking place on Sunday, August 6.

By Justin Nguyen
2 Mins read
For the NASCAR Cup and Truck Series’ dirt races at Bristol, a random draw will set the lineup for the heats, and points will be awarded for passing drivers.
NASCAR Cup Series

By Justin Nguyen
3 Mins read
Ahead of NASCAR’s inaugural Texas Grand Prix at Circuit of the Americas in May, Cup Series champions Chase Elliott, Brad Keselowski, and Martin Truex Jr. conducted a tyre test for Goodyear.