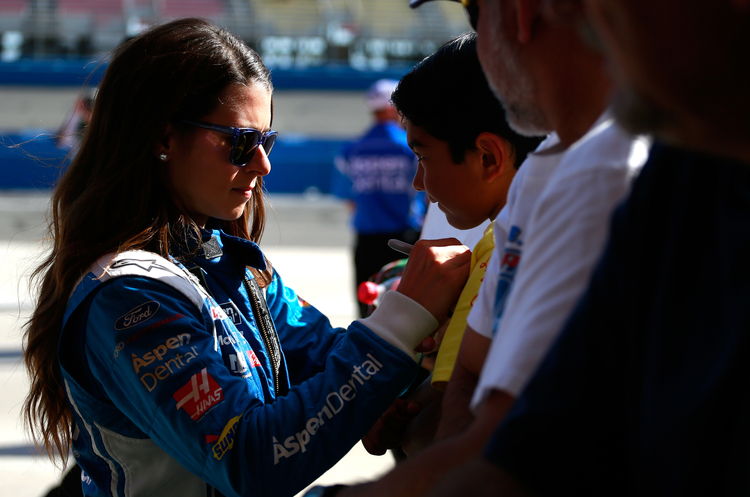 Danica Patrick has announced today that she will not be driving for Stewart-Haas Racing in the 2018 Monster Energy NASCAR Cup Series. The #10 driver cited sponsorship arrangements as the reason for the departure and did not confirm any plans for next year as of yet.

Patrick has struggled with sponsorship issues recently. Her previous sponsor’s Nature’s Bakery ended their previous three-year partnership with Patrick after one year following a court dispute where they claimed she had been promoting rival products via social media. The company returned following the court settlement to fulfill their contractual agreements, but only for one race with Patrick before moving over to Clint Bowyer‘s #14 car. As a result of the disagreements, Danica was without a main sponsor for next year’s season, which put her a weak position with the team; which may have ultimately led to the Stewart-Haas searching for a replacement driver with better backing.

Danica made her NASCAR debut in the XFINITY Series in 2010, driving a part-time schedule for JR Motorsports whilst continuing with her IndyCar series duties. In 2012 she made the switch from IndyCar to NASCAR full-time. In her sixty-one starts in the XFINITY Series, she took seven top ten finishes and a pole position at the 2012 DRIVE4COPD 400 at Daytona International Speedway.

For 2013, she made the move up to the NASCAR Cup Series full-time with Stewart-Haas Racing. On debut, she took pole position for the Daytona 500, but that would end up being the highlight of her Cup series career. In her 110-race career so far, Danica has only managed to finish in the top ten on seven occasions; with a best finish of sixth at Atlanta in 2014.

In the past few months, Patrick has hinted at the possibility of not racing full-time next year. Her statement today confirmed her reasons for her split from the Stewart-Haas Racing team, but there were no indications of any 2018 plans as of yet; perhaps signaling a potential end to, at least, her stock car racing career.

“It has been my honor to drive for Tony Stewart, Gene Haas and everyone at Stewart-Haas Racing for the past six seasons. Together we earned a Daytona 500 pole, seven top-10 finishes and we also had some exciting racing along the way.” Said Patrick in a statement released on her Facebook page earlier today, “My time driving for them, however, has come to an end due to a new sponsorship arrangement in 2018.  Sponsorship plays a vital role in our sport, and I have been very fortunate over the course of my career, but this year threw us for a curve. Our amazing partners, such as Aspen Dental and Code 3, stepped up in a big way on short notice this year and I am incredibly grateful.

“I wish SHR the best of luck with their new sponsorship and driver. Thanks for the memories.  Right now, my focus is on the remainder of the 2017 season and finishing the year strong.  I have the utmost faith in myself and those around me, and feel confident about my future.”

The sponsorship arrangement that Patrick was eluding to is the deal between Stewart-Haas Racing and Smithfield Foods, who announced today that they would be switching to SHR having previously sponsored the #43 Richard Petty Motorsports car of Aric Almirola since 2012. With rumours suggesting that a new driver could be in the frame at RPM, such as Darrell Wallace Jr who subbed for Almirola earlier this year, there’s every chance that Almirola could be moving with his sponsor to Stewart-Haas. Other candidates could include Cole Custer, who drives the Stewart-Haas Racing Ford Mustang in the NASCAR XFINITY Series.

By Justin Nguyen
2 Mins read
In what was technically the first-ever rae for the NASCAR Cup Series’ Next Gen cars, Erik Jones beat Timmy Hill to win the eNASCAR iRacing Pro Invitational Series race at Darlington.