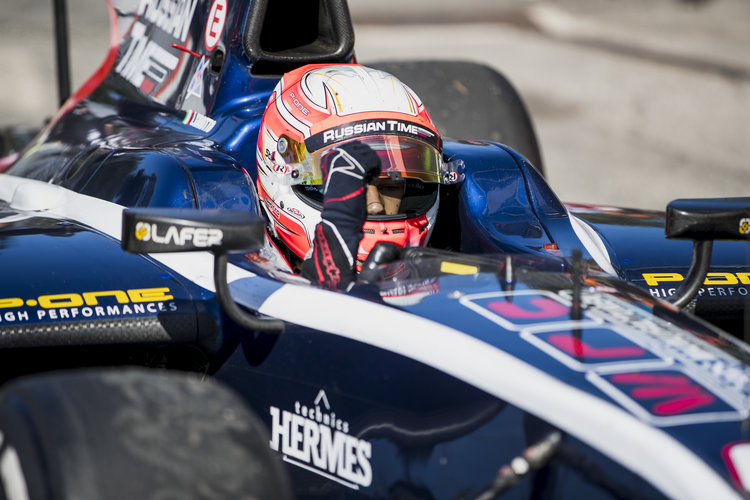 Luca Ghiotto took to the top step of the iconic Monza podium by claiming the FIA Formula 2 Sprint Race victory.

The Italian had won the Feature Race on track but late Saturday night was handed a five second after it had been deemed he had gained an advantage by cutting the chicane.

As a result Ghiotto dropped to fourth place, handing the victory to Antonio Fuoco – the former was now due to start from fifth place.

Gustav Malja started from reverse grid pole, the Swede bogged down allowing Sean Gelael to blast past into the lead ahead of: Louis Deletraz, Sergio Sette Camara, Malja and Ghiotto.

Deletraz, tried to make a move on Gelael but cut both chicanes meaning he had to give way to the Indonesian driver. The Swiss driver, finally managed to get back through for the lead at Rettifilo on lap 4.

Behind, Ghiotto got the move done on Malja on the inside of the Parabolica to claim fourth place. It soon went from bad to worse for the Swedish driver who ran deep losing positions to Nicholas Latifi and Fuoco.

Still on the charge ahead, Ghiotto mugged Gelael to take 3rd place leaving the Pertamina Arden driver vulnerable to Latifi behind. Now only Deletraz lay between Ghiotto and victory.

The inevitable move came on lap 11, with the Italian getting the move done at Lesmo 1 for the lead which he maintain until the chequered flag, easing away from the rest of pack who squabbled behind.

Sette Camara was keen to prove his Spa victory was not a fluke by easing by Deletraz on the straight for second but was unable to close down the leader.

Artem Markelov sustained damage to his front wing as he pushed passed Latifi but quickly undone all his hard work by running deep at turn 1.

Ghiotto took the chequered flag by two seconds over Sette Camara, with Fuoco joining them on the podium. Deletraz came home in fourth a long way ahead of Roberto Merhi who displaced Gelael late in the race.

ART Grand Prix team-mates Nobuharu Matsushita and Alexander Albon spent much of the last lap swapping places after the pair took advantage of a struggling Latifi.

Championship leader Charles Leclerc was looking to make an impact in the race after being taken out on the final lap of the Feature Race by Nyck de Vries but damage to his front wing halted the Monegasque driver’s charge, ultimately crossing the line in ninth place.

Despite not scoring any points, Leclerc still leads the championship on 218 points to Oliver Rowland‘s 159, followed by the Russian Time duo of Markelov and Ghiotto.

Russian Time hold a small advantage over Prema Racing and DAMS in the Teams’ Championship.

The penultimate round of the 2017 championship is a stand alone event in Jerez on 6-8 October.

By Joe Ellis
1 Mins read
With both series running on alternate weekends, Formula 2 and Formula 3 will keep us entertained for even more weekends across 2021 with both series’ schedule’s announced today.
Formula 1Formula 2

By Paul Hensby
2 Mins read
Mick Schumacher, Callum Ilott and Robert Shwartzman will find out soon from Ferrari about which one of them will move into Formula 1 in 2021.
Formula 2Formula 3

By Joe Ellis
1 Mins read
We’ve now seen the last of F2 and F3 on the same package as 2021 will see the two series’ alternate on F1 weekends as a way to cut down on costs. Each weekend will also consist of three races rather than two.