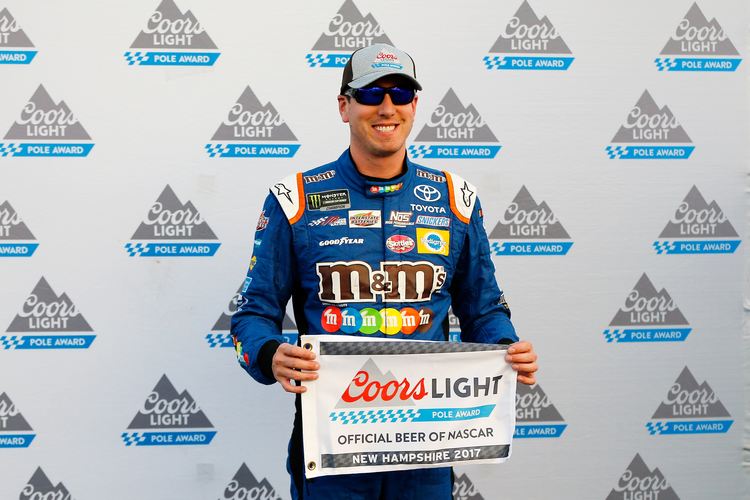 Kyle Busch has qualified on pole position for this Sunday’s Monster Energy NASCAR Cup Series ISM Connect 300 at New Hampshire Motor Speedway. Busch beat out Kyle Larson to take pole by just under three-hundredths of a second, but he almost didn’t make it to the final round after a mistake during his run in the second round.

Having set a blistering pace in round one, Busch looked to be the favourite for pole early on. However, during round two, the #18 Joe Gibbs Racing driver ran way wide and out of the groove; ruining the first lap of his run and also dirtying his tyres in the process. With just a few minutes remaining in the session at the time, Kyle had to get back up to speed fast if he wanted to advance. Somehow he managed to quickly clean up his tyres, recompose himself and run another lap that was good enough to get into the top twelve shoot-out.

Kyle returned to the top of the leaderboards in round three, but by a reduced margin that he had previously held. He beat Kyle Larson’s previous benchmark lap by just 0.029 of a second to maintain his 100% record of 2017 playoff pole positions; having also taken the pole at Chicagoland a week ago. Kyle will be hoping that he and his team can avoid any mistakes this time, however, having led from pole until two pit-lane penalties ended his run for the win:

“Certainly feels pretty good to capitalize on another good Friday and we just need to somehow figure out how to turn these things into good Sundays, you know?” said Busch after qualifying, “Being able to start up front, it’d be nice to stay up front all day and limit our mistakes and not have any of those and be able to carry on and go to victory lane on Sunday.”

Larson will line-up alongside Busch on the front-row in the #42 Chip Ganassi Racing Chevrolet. It was a great result for Kyle, who has continued to improve his previously poor pace on short tracks like New Hampshire. Starting just behind him in third place will be the #11 Joe Gibbs Racing Camry of Denny Hamlin, who was on a lap good enough for pole position until he made a mistake in the middle of turns three and four.

Ryan Blaney had a strong showing for Wood Brothers Racing with fourth place. He was the last driver to get within a tenth of a second of Busch on the pole. Martin Truex Jr, last week’s race winner, will complete the top five in the #78 after the Furniture Row Racing team left it too late to head out in the final round and were forced to only run one lap instead of two.

Stewart-Haas Racing team-mates Kevin Harvick and Kurt Busch will line-up sixth and seventh respectively on Sunday. Rookie Erik Jones will start just behind them in eighth in the #77 Furniture Row Camry after a strong run that saw him be the only non-playoff contender to reach the final round of qualifying.

Kasey Kahne ran solidly throughout qualifying to get ninth on the grid. He was the highest placed Hendrick Motorsports driver, too, with team-mates Jimmie Johnson, Chase Elliott and Dale Earnhardt Jr in positions twelve, fourteen and fifteen. Johnson and Elliott will start at the rear of the field, however, after both crashed in first practice and forced themselves to go to a backup car for the race.

Behind Kahne in ninth will be Matt Kenseth‘s #20 Joe Gibbs Racing Toyota in tenth and Jamie McMurray‘s #1 Chip Ganassi Racing Chevrolet in eleventh. The aforementioned #48 of Johnson had qualified twelfth, but will now move to the rear of the field for the race.

Brad Keselowski was just outside of the top twelve in his #2 Team Penske Ford and failed to advance to the final round. His team-mate Joey Logano had much worse luck, however, after failing to run a single lap in qualifying. Logano’s #22 failed to pass pre-qualifying laser inspection and will subsequently start thirty-ninth.

Austin Dillon, Ryan Newman and Ricky Stenhouse Jr – the remaining playoff contenders – will start seventeenth, eighteenth and twenty-fourth respectively and will have to gain ground and find pace in the race if they want to improve their playoff standings. All three had a lacklustre start to the elimination round after mid-field finishing positions last week at Chicagoland. Another poor finish on Sunday will put them in a bad situation heading into the final race of this elimination round at Dover.

The Monster Energy NASCAR Cup Series field have two practice sessions tomorrow to further fine-tune their cars. After that, all that remains of the event is Sunday’s three-hundred lap race; the ISM Connect 300.