Martin Truex Jr will start on pole position for this weekend’s Monster Energy NASCAR Cup Series Apache Warrior 400 presented by Lucas Oil at Dover International Speedway. The #78 Furniture Row Racing driver will line-up alongside the #18 of Kyle Busch, arguably his main championship rival, whom he stole pole position from by just half a tenth of a second in the final round of the session.

Entering the weekend, Kyle Busch was the man to beat. Having topped practice earlier in the day, the driver of the #18 Joe Gibbs Racing car started qualifying by topping the first two sessions. He was looking on course to take his third NASCAR Cup Series pole position in a row, which would, in turn, mean that he swept all three qualifying sessions for the first round of the playoffs; an impressive feat had he gone on to do that.

However, in the final session, he was usurped by a fellow championship favourite. His final lap of 22.445 seconds was good, but slightly off what he could potentially have done. That left the door slightly ajar for someone to step in and steal pole, and that’s what Truex Jr did. Martin’s lap was just 0.038 of a second faster, but it was enough for him to take his fourteenth career pole position. What is even better for Truex is that he took the pole at his home track and for the event that he won a year ago.

“It’s awesome, hats off to all the guys. The Furniture Row Toyota was awesome today. I just had to put it all together,” said Truex post-qualifying, “My timing was off a little in the first two rounds and between that and just getting the balance right like I said earlier, it’s hard to put it all together for that third round. Today we did it. Still thought I could have done a better job driving, so we’ll keep working on that, but great start for Sunday and hopefully we’ll get some more points.”

The top three positions would be occupied by the three drivers who are arguably the three drivers most likely to take the championship this year. With Truex and Kyle Busch in first and second, fellow protagonist Kyle Larson would follow just behind in third place in the #42 Chip Ganassi Racing Chevrolet. It was an impressive run from Larson, who prevented Toyota from locking out the top five on the grid. Matt Kenseth was just two-thousandths of a second further back in the #20, with the two remaining Joe Gibbs Racing cars of Daniel Suarez and Denny Hamlin just behind in fifth and sixth places respectively. 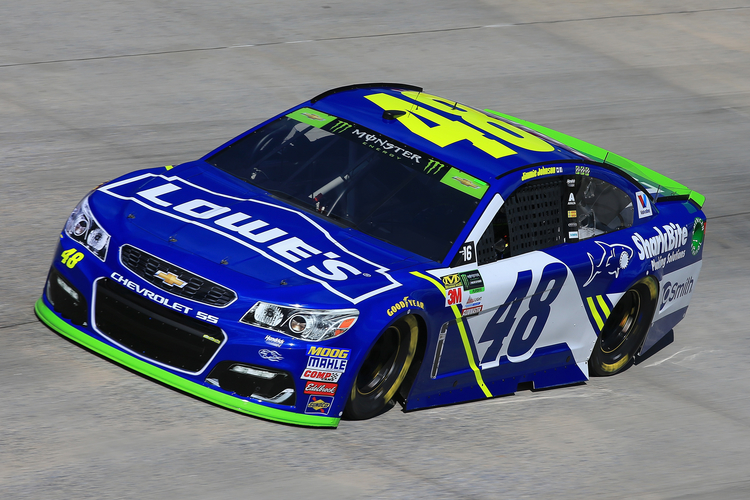 Suarez’s drive to fifth place in qualifying was one of the standout performances in qualifying, but the effort made by fan-favourite Dale Earnhardt Jr wasn’t too far off. The #88 Hendrick Motorsports Chevrolet looked fast prior to the final round, with Dale Jr taking second place in the penultimate session. He was on track for a possible top-five run until his car bobbled slightly in turns three and four; ultimately relegating the #88 to seventh place. Nevertheless, the result for Dale Jr is much better than he’s been managing in the weeks, even months, prior to this weekend.

Ryan Newman took his #31 Richard Childress Racing Chevrolet to ninth in qualifying, with Kevin Harvick just behind in ninth place in the #4 Stewart-Haas Racing Ford. Rookie, Erik Jones, managed to make it to the final round of qualifying to take tenth, with sophomore drivers Ryan Blaney and Chase Elliott completing the top twelve that also advanced to the pole position shoot-out.

Seven playoff contenders failed to make it all the way in qualifying. Kurt Busch was just outside of the top twelve after qualifying thirteenth in the #41 Stewart-Haas Chevrolet. Ricky Stenhouse Jr put in a stronger performance than perhaps even he and his Roush Fenway Racing team expected to put the #17 Ford in fifteenth, with fellow Ford driver Brad Keselowski just behind in sixteenth in the #2 Team Penske car.

Despite his incredible record at Dover, Jimmie Johnson was unable to take his #48 Hendrick Motorsports Chevrolet to the third round after being eliminated in seventeenth. With eleven previous victories at the Speedway, many are viewing this weekend’s race as the true indication as to whether Johnson will be able to fight for this year’s championship. If qualifying is anything to go by, that won’t be the case. Team-mate Kasey Kahne was the only HMS driver lower on the grid than Johnson, with the #5 Chevrolet down in twenty-first place.

The final two playoff drivers on the grid will be Austin Dillon and Jamie McMurray. Dillon qualified his #3 RCR Chevrolet down in twenty-third, with McMurray even further back in his #1 Chip Ganassi Chevrolet. McMurray was the only playoff driver to be eliminated in the first round after only managing to get twenty-sixth place. He’s currently just above the cut line to advance to the next round of the playoffs, but his qualification could put him in a tricky spot in Sunday’s race.

The Monster Energy NASCAR Cup Series field have two practice sessions ahead of them tomorrow, with Sunday’s Apache Warrior 400 following on Sunday afternoon. After the race, the bottom four drivers in the playoff order will be eliminated from championship contention.

By Justin Nguyen
1 Mins read
Former Daytona 500 winner-turned-NASCAR announcer Jamie McMurray will return to the driver’s seat for the 2021 race, once again driving for Spire Motorsports.