Latest
Racing Point’s Otmar Szafnauer: “We need to appeal it because we stayed completely within the...
Tsunoda steals victory after PREMA’s collide for the lead
Grosjean “did a fantastic job today to put those laps in” – Haas’ Steiner
Lando Norris: “We knew this wind wouldn’t play in our favour”
Belgian Audi Club Team WRT obtain a 1-2 finish at Misano
Charles Leclerc: “We are starting from P8 and I cannot be happy with that”
Viscaal victorious with last corner pass in epic F3 race
Pierre Gasly: “That was an amazing Saturday and I’m very happy about my Qualifying result!”
Daniel Ricciardo: “I think fifth place is an awesome result for us”
Verstappen ‘Felt Strongly’ About Using the Hard Compound for the Race Start at Silverstone
European RallycrossSeason Review

The 2017 FIA European Rallycross Championship For Supercars saw its most competitive field of entries since the reboot of the Euro RX series back in 2014 and for many, picking a winner from the 30 plus entries before the season started was a near impossible task.

However, by the time we reached the final round in Latvia in September, we had witnessed a dominant display during the year where former FIA World Rallycross Championship competitor Anton Marklund had sealed the title before the Semi-Finals had begun.

Driving for his family run Marklund Motorsport outfit with fellow Swedish driver Magda Andersson as a team-mate, Marklund focused on the task ahead of him and applied himself well as he approached each event, but there were still moments where you could question how much focus was used.

Unexpected runner up to Marklund was former RX2 competitor Thomas Bryntesson, driving in his first full season of Supercar competition. Alongside his Euro RX campaign at the wheel of a JC Raceteknik Ford Fiesta, The Norwegian driver also took part in a full season of RallyX Nordic which helped with adapting to the Supercar competition and ultimately saw him seal his home title.

Bryntesson quietly made his way through the season, racking up experience and points before stealing the show at Loheac in France, taking his first ever win in very difficult conditions at the Temple of Rallycross ahead of more experienced drivers including Hungarian driver Tamas Pal Kiss.

Kiss moved over from single seater racing to Rallycross competition in 2015 before taking part in his first full time campaign in 2016. Driving an ex-Hansen Development Peugeot 208 WRX that gained a raft of updates just before Loheac. After a quiet start to his season as well, Kiss moved forward in pace at both Loheac and in Riga to take third place in the overall standings at the end of the year.

After two years in World RX, Larsson returned to Euro RX in his iconic Audi A1 “Diane” and started as one of the favourites for the title. For Rustad, he was returning to Euro RX in his second season driving for Andy Scott‘s Albatec Racing outfit which saw its Peugeot’s updated for 2017. 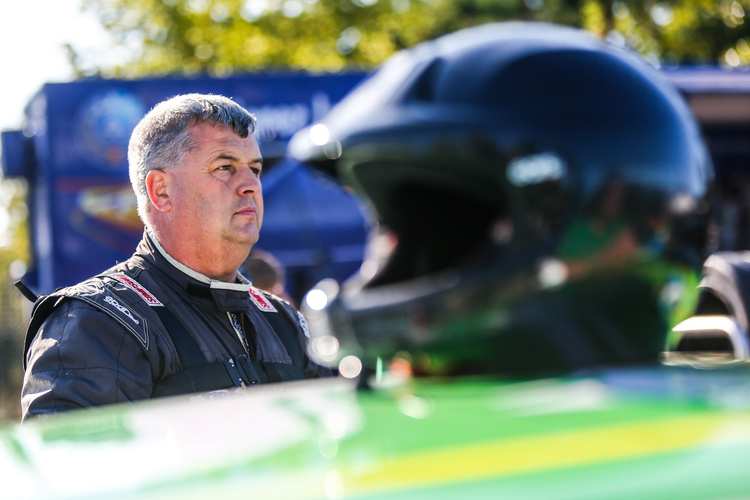 However luck was not on either drivers side during the year. At the first round in Spain, as Marklund went onto take his first win, contact with other competitors during Semi-Final One saw both Rustad and Larsson miss the Final. This led to Marklund striding to his first win of the year ahead of Kiss, but the highlight of the race was the epic fight for third place.

Rene Munnich in his Munnich Motorsport SEAT Ibiza RX in his first full Euro RX campaign and 2007 British Rallycross Champion Ollie O’Donovan in his Team RX Racing Tony Bardy Motorsport prepared Ford Fiesta duked it out for the final podium place. Ultimately it is was O’Donovan that stole the podium finish however this would also turn out to be the London-based Irishman’s only podium of the year.

Fellow Irishman Derek Tohill scored fifth place in Spain and would also be another driver who saw a big step in improvement at the wheel of his PFCRX Ford Fiesta which was now racing in its second season of Euro RX. Henning Solberg guesting for Per Eklund Motorsport in the VW Beetle completed the top six.

With a gap of almost three months til round two at Hell in Norway, some of the Euro RX regulars also competed in World RX rounds. Martin Kaczmarski competed in the most amount of events outside his Euro RX campaign, with the Polish driver racing the same Ford Fiesta he campaigned last year. The Likes of Munnich, Larsson, O’Donovan and others also got seat time in before Norway.

Larsson came out fighting in Hell to get his championship challenge back on track, however there were several worthy opponents as Kiss, Marklund and Bryntesson all took a win in Qualifying to stake their claim whilst the consistency of Rustad pushed him into contention too.

In the Semi-Finals, Albatec Racing saw both of its Peugeot’s competing as Finnish driver Jere Kalliokoski showcased the talent that won him the 2016 Finnish Rallycross Championship whilst former driver Jerome Grosset-Janin had a better time in the Herve Knapick run Citroen DS3 he would campaign in 2017.

Rustad endured a difficult year in Euro RX and hopes for more in 2018. Credit: McKlein/Albatec Racing

In the Final, Larsson made his point clear as he commanded the Final and took the win with Marklund playing it cool and taking second place to extend his Championship lead. Behind these two saw a strong point made by Hedstrom Motorsport team-mates Alexander Hvaal, who completed the podium and Peter Hedstrom who took fourth place in their Volkswagen Polo’s. Kiss stayed in the hunt with fifth place whilst Rustad suffered a puncture to finish in sixth place in what would be the first event of what would be his bad luck for the year.

Within a fortnight, Holjes was upon us and the crowds flocked to the Magic of Rallycross in Sweden to see what the Supercar drivers could offer. As Bryntesson and Larsson dominated Qualifying, Marklund was again playing the long game, making sure he progressed through to the Semi-Finals to protect his series lead.

There seemed to be a change in form in Sweden which saw local drivers Andersson, Ola Froshaug and Mats Ohman join the list of those to progress forwards into the Semi-Finals during tghe season. Marklund returned to the top step of the podium in Sweden to take his second win of the year ahead of Hedstrom and Munnich, who had changed to an ex-Petter Solberg Citroen DS3 just before the 2017 World RX of Great Britain.

The change of car seemed to improve the German’s pace as he completed the podium ahead of Froshaug, Hvaal and Ohman. Those to miss out on the Final were the big hitters of Larsson, Rustad, Bryntesson and Kiss and this gave Marklund a further advantage in the standings before another big wait for the next round in France.

Three months later and the action resumed at Loheac where the title was the talk of the town. With a strong entry of French drivers in Euro RX for this event, there were a few surprises to come during what was a weekend of miserable conditions including heavy rain. Larsson would have a dreadful weekend where contact and conditions caught out the former World RX race winner and Rustad would barely make it through to the Final himself.

It was the strong local talent from the French Rallycross Championship that troubled the Euro RX regulars the most. Jonathan Pailler, Patrick Guillerme and Firmin Cadeddu all made it to the Semi-Finals whilst O’Donovan, Hvaal and Andersson all returned to form at Loheac. Bryntesson took his opportunity to shine as he took his first ever win ahead of Kiss in his now upgraded Speedbox Racing Peugeot whilst Cadeddu made his presence known in the Citroen C4 by taking third place.

With Larsson failing to get out of Qualifying and Rustad taking sixth place in the Final due to another puncture, Marklund extended his lead as Bryntesson and Kiss increased the pressure in the points standings. Tohill had another good outing as he saw his season begin to improve whilst Grosset-Janin made the Semi’s at his home event.

At the final round of the year in Latvia, Marklund almost had the title in his grasp and such was his pace at the Riga Circuit that he had sealed the Drivers Title at the end of Qualifying. The Final itself saw the top five in the Drivers Championship up against each other and while Marklund strolled to the race win, behind Larsson was fending off a charging Kiss whilst Rustad and Bryntesson battled hard for fourth place with Hungarian driver Tamas Karai in a newly re-liveried Audi S1.

Whilst there have been the best of the best from the various Domestic Rallycross Championships competing in Euro RX in 2017, there are so many drivers that I have not named yet who have done their best in what was a difficult year of very close competition.

Riku Tahko, Tom-Daniel Tanevik, Andréa Dubourg, Ole-Kristian Temte, Andreas Steffen, Jochen Coox, Michael De Keersmaeker and Mandie August were amongst the many who competed hard for a place in the Semi-Finals at each event but ultimately missed on due to the high level of competition in the Championship.

Tamas Pal Kiss was the most improved driver of 2017, in only his second year of Rallycross Competition. Credit: tamaspalkiss.com

With concern amongst the fans that World RX could become a Manufacturer dominated series with escalating budgets and big teams competing for the big prizes and a series where Independent drivers are not able to shine, have no fear about the FIA European Rallycross Championship For Supercars.

As 2017 showed, there are many drivers and teams that want to win this coveted crown just as much as those looking to win the World Championship.

You can guarantee that for 2018, the level of competition will be even higher, the cars will be even closer and it will be an impossible task to pick a winner until the final round takes place. Euro RX always puts on a good show and offers drivers a chance to go up against the best that Europe has to offer and next year will be no exception.

Bryntesson Ready to Shine at the All-Star ‘Magic Weekend’