As the Formula Ford Festival resumed at Brands Hatch, the two Semi-Final races proved to be a highlight of the weekend so far, with Joey Foster battling his way through to win the opening encounter, while Neil Maclennan will start on pole after winning the second Semi-Final.

They will have plenty of opposition behind them as the pair both overtook polesitters Matthew Cowley and Chris Middlehurst respectively, but it’s all to play for as they head to the final.

The battle for the lead continued much longer than the first lap as Cowley led at the end of the opening lap. Foster had been the favourite on Saturday, but it was going to be a tougher time for the #155 as Keith Donegan made spectacular progress in the opening lap.

The top eleven broke away, but only a few tenths separated the drivers. The battle for fourth was just as intense with Luke Cooper touching Jaime Thurburn as the latter spun into the barrier. A few laps later James Roe Jnr would also try to get past Cooper, but went off-line into Druids and fell to the back.

No safety car was called as Foster, having finally fought off Donegan, made his way around the outside of Cowley, taking the lead at the half way point.

Foster would hold off the opposition and came home for the opening Semi-Final win as he was chased to the line by Cowley. The race was arguably the most competitive of the two races, as Donegan took third place.

He had been caught by Cooper in the final lap though, with the Swift SC16 setting the fastest lap. In fifth would be Josh Smith having kept out of trouble, while Jason Cooper, Jordan Dempsey and Sebastian Melrose rounded out the top eight. 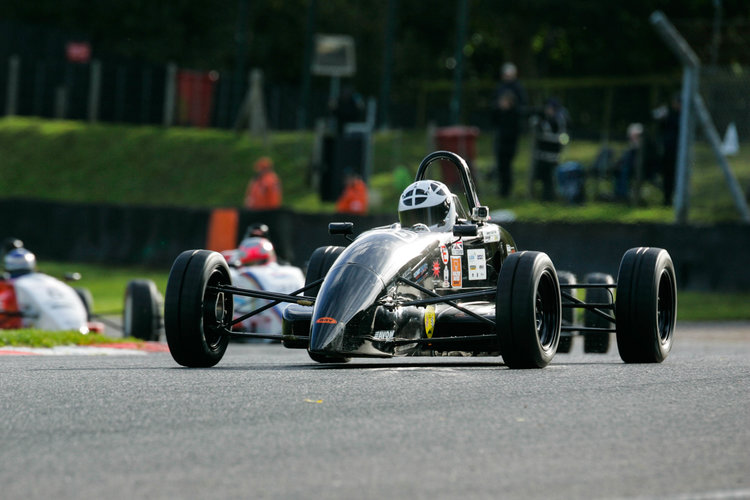 Foster was once again the man to beat in the opening Semi (Credit: Jack Mitchell / JAM Photography)

Chris Middlehurst would line up on pole for the second race and started to break away initially as a dire start from Matt Round-Garrido saw him swamped in the opening lap. He only lost a place to Neil Maclennan, as he looked to hold off Ross Martin.

Martin had made one of the strongest starts, but it would prove to be pointless as he outbraked himself into the hairpin, running through the gravel and dropping to the back, though did recover to thirteenth.

Middlehurst though was not making the progress he wanted though, with a five car train forming for the lead. Maclennan had the most momentum and hounded the leader as Round-Garrido, Noel Robinson and Darren Burke kept themselves in contention.

With only a few laps to go, Maclennan finally made his way past Middlehurst after a late move into Graham Hill bend. It would be enough for him to take the victory and thus pole position for the Final later this afternoon as Round-Garrido completed the podium.

Robinson would cross the line in fourth, but a five second penalty dropped him to seventh, promoting Burke, Rory Smith and Henry Chart. Rounding out the top eight would be the experienced David McCollough.