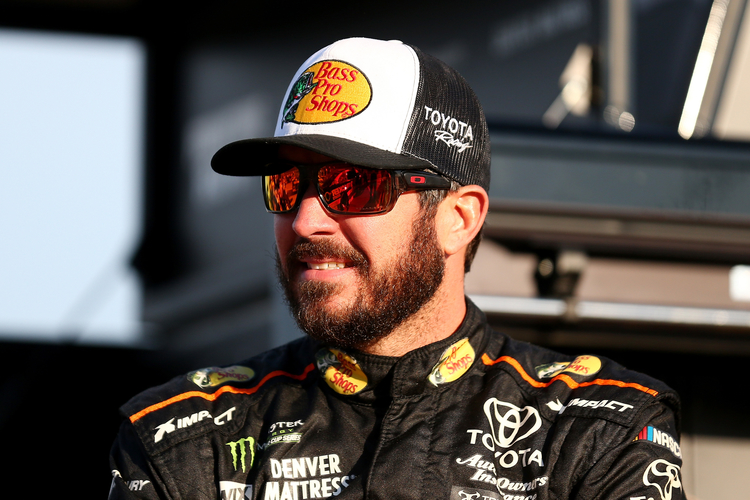 Martin Truex Jr will start on pole position for this weekend’s Monster Energy NASCAR Cup Series Hollywood Casino 400 at Kansas Speedway. The driver of the #78 Furniture Row Racing Toyota Camry put in a scintillating lap in the final session of qualifying to knock Kevin Harvick off of pole position.

Having won at Charlotte Motor Speedway two weeks ago, Truex Jr is safe from the elimination that will take place after Sunday’s race. However, the better he can do, the harder he can make it for his rivals to save themselves. There’s also the chance for Truex to earn more playoff points through stage wins in the race, meaning that all the incentive is still there for him to do well.

Starting at the front of the pack will make it easier for the unpressured #78 driver to win again on Sunday, but there’s also the added bonus of a good pit-box choice for not just this weekend, but also for Martinsville next weekend; with the order of choice being based off of this weekend’s qualifying for both races.

“This was a big one tonight with next week’s pit selection, so just really proud of everybody.” Said Truex after qualifying, “Great execution all day making right adjustments and right calls in qualifying there. Just had to step it up there, I’m shaking a little bit after that one it was pretty wild.

“I was shaking a little, I’m not going to lie. My heart was beating. It gets the adrenaline going so high. To put down a lap like that, just to go the fastest you have all day long in that final round on the third run on tires, we just – we put it all together. We got the balance better and I stepped up and put it on the line out there and it stuck. Commitment level was high and the car handled it well. It’s always a good combination.”

Truex’s late lap of 28.719 seconds was enough to clear provisional pole-sitter Kevin Harvick by half a tenth of a second. The #4 Stewart-Haas Racing driver will start from second place and will be vying to win the Kansas fall race for a second consecutive year.

Ryan Blaney took his first NASCAR Cup Series pole position at Kansas a few months ago for the race in May. His #21 Wood Brothers Racing Ford Fusion looks just as fast this time around, but this time he’ll start from the second row of the grid in third place. Matt Kenseth will share the second row with Blaney; with the two separated by just two-thousandths of a second.

Kenseth’s Joe Gibbs Racing team-mate, Denny Hamlin, completed the top five; with all five separated by less than a tenth of a second. All four JGR Toyota’s made it into the top twelve shoot-out, with the remaining two cars of Daniel Suarez and Kyle Busch qualifying in sixth and eighth respectively. Rookie Erik Jones split the pair by putting his #77 in seventh place.

Jamie McMurray had a strong showing for Chip Ganassi Racing in ninth place, just ahead of tenth-placed Clint Bowyer and last weekend’s Talladega winner Brad Keselowski in eleventh. Austin Dillon completed the top twelve that made it to the final session in the twelfth position.

Three playoff contenders failed to make it to the final round by less than a tenth of a second. Jimmie Johnson, Kyle Larson and Chase Elliott will line-up nose to tail in positions thirteen, fourteen and fifteen; with Larson putting in a disappointing performance in qualifying having shown strong speed in first practice. Only one playoff driver was worse off than the trio, with Ricky Stenhouse Jr way back in twenty-fifth having been unable to advance out of round one.

The Monster Energy NASCAR Cup Series field will have two practice sessions to take part in tomorrow in order to further dial themselves in for Sunday’s race. This race could be one of the most crucial for the championship, with all but Truex and Keselowski locked into the next round. Drivers such as Kyle Busch, Jimmie Johnson, Matt Kenseth, Ryan Blaney and more will be fighting to stay in the championship hunt, with the bottom four playoff contenders being eliminated after Sunday’s Hollywood Casino 400. Be sure to tune in.

Next Gen car reveal set for 5 May, Tyler Reddick tests at Darlington

By Justin Nguyen
4 Mins read
Joey Logano and Harrison Burton will lead the NASCAR Cup and Xfinity Series fields to green at Martinsville, respectively. Logano won the last Cup race two weeks ago, while Burton is the most recent Martinsville winner last fall.