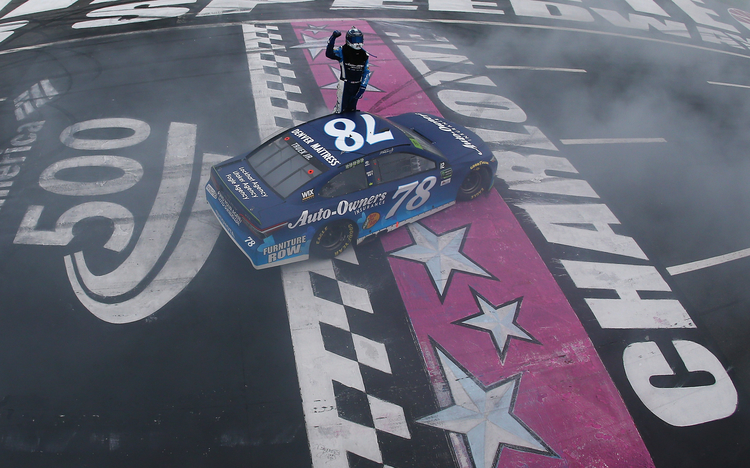 Martin Truex Jr has won the Monster Energy NASCAR Cup Series Bank of America 500 at Charlotte Motor Speedway. After a rough start to the event in qualifying, Truex rallied late to usurp former race-leader Kevin Harvick during the final stage en-route to victory.

Truex Jr may have taken the lead away from Harvick in stage three, but the driver of the #4 Stewart-Haas Racing driver was determined to hang on to the coat-tails of the #78. The pair remained close throughout the final segment, but a number of late-race restarts disrupted the battle; with Harvick falling behind the likes of Chase Elliott and Denny Hamlin during the ensuing pit-stops. Through it all, Truex was able to hang on to his lead and take his sixth win of the season and his second win of the playoffs.

Through it all, Truex was able to hang on to his lead and take his sixth win of the season and his second win of the playoffs. The win earns him a guaranteed spot in the next round of the playoffs and further underlines his championship contending credentials; especially considering that he came from the mid-pack after qualifying unusually low in seventeenth.

“Unbelievable win. Just a total team effort.” said Truex in victory lane, “Every single guy – every guy on this team just did a perfect job today and I can’t be more proud of them and at this time of the year is just when you want it to happen. You dream about days like today. I don’t know if we had the best car, but we damn sure go it in victory lane.” 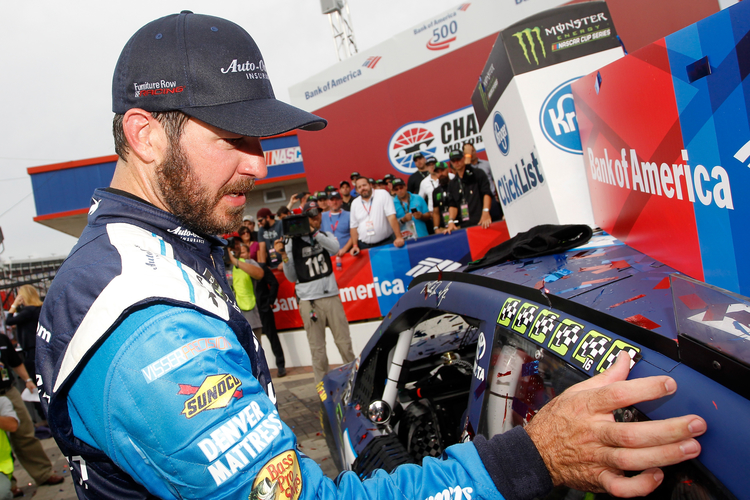 Chase Elliott took the runner-up spot for the second week in a row. The #24 Hendrick Motorsports driver ran in the top ten throughout the race and came into contention during the late-race restarts. He was unable to properly challenge Truex for the lead, however, instead getting caught up with Denny Hamlin in a side-by-side battle for position. Nevertheless, the continuation of his strong form this weekend is a positive sign for Elliott; who could advance further into the championship playoffs at this rate.

Kevin Harvick looked to be the one to beat for much of the race until Truex’s charge. The #4 Ford driver led the most laps and won stages one and two to earn further valuable playoff points. Sadly for Kevin, despite being able to hang on to Truex in the final stage, the late cautions would see him bogged down a little further back; unable to fight for what would’ve been his second win of the season and his first of the playoffs. Similarly, pole-sitter Denny Hamlin was unable to use his strong pace from Friday night’s qualifying to his advantage. He would take fourth place.

Perhaps a buck of the trend so far this season, Jamie McMurray led the charge for Chip Ganassi Racing at Charlotte. He ran strongly in the top ten virtually all race long and managed to take his third top-five finish of 2017. Another strong race was had by rookie Daniel Suarez. The #19 Joe Gibbs Racing driver was the first non-playoff contender on the scoreboards in sixth place, with the eleven-time winner at Charlotte, Jimmie Johnson, just behind in seventh.

Ryan Blaney took a solid eighth-place finish for Wood Brothers Racing, with Kasey Kahne and Kyle Larson rounding out the top ten. For Larson, it was a slightly disappointing race, with the #42 Chip Ganassi Racing driver finishing outside of the top ten for the first time since the Southern 500 since the start of September. Larson’s fellow playoff contender, Matt Kenseth, would finish just behind in eleventh. 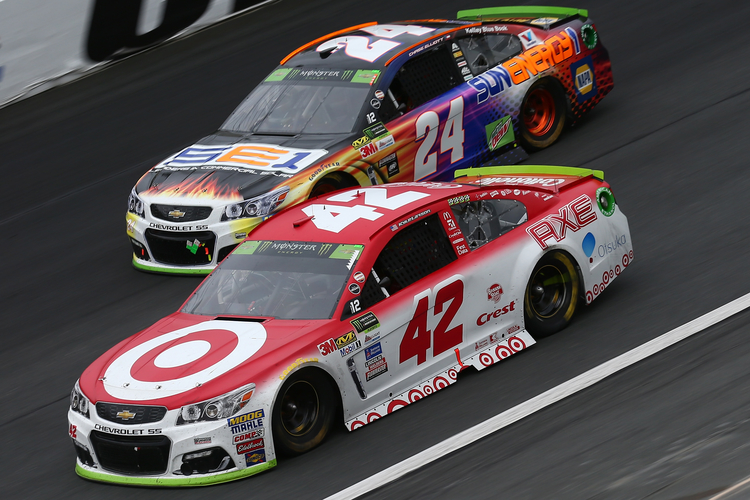 The three remaining playoff contenders had a tough time of it at Charlotte Motor Speedway. Ricky Stenhouse Jr got caught speeding in his #17 Roush Fenway Racing Ford in one of the late cautions but managed to rally back to a thirteenth place finish despite having restarted at the tail end of the drivers on the lead lap. Fellow Ford driver Brad Keselowski followed a few positions further back in fifteenth after an unassuming race in the #2 Team Penske car. He’ll be hoping to replicate his previous good pace at Talladega, the site of next weekend’s race if he wants to better his chances of advancing to the next round of the playoffs.

Of all the playoff contenders, no one had a harder race than Kyle Busch. The winner of the last two races in the run-up to this weekend had his race slowly unravel after several hits with the wall. Despite rather substantial damage to his #18 Joe Gibbs Racing Toyota Camry, Kyle tried to stick it out and make it to the finish; but his efforts cost him post-race. As the race neared its end, Busch signalled to his team that he may require medical attention post-race. Once he stepped out of his car, he almost collapsed due to exhaustion and possible carbon monoxide poisoning from exhaust fumes in his car. Thankfully, after some time in the infield care centre, Busch was released and was seemingly feeling better. However, his eventual twenty-ninth place finish may leave him feeling sick for a few days to come.

Next weekend, the Monster Energy NASCAR Cup Series heads to the high-banks of Talladega SuperSpeedway for perhaps the race that all the playoff contenders are most nervous about. Talladega always has the potential to throw up a twist in the championship showdown, with a poor result in Alabama possibly spelling an end to our championship contender’s hopes.