Martins Back in Title Lead as Milesi Takes Double Win

The Circuit de Catalunya-Barcelona played host to the penultimate round of the French F4 season, with Victor Martins retaking the lead of the championship as he enjoyed a strong weekend. The 16-year-old took away two handfuls of 25 points, as double race winner Charles Milesi was a guest driver in Spain.

Milesi has been a regular this season, but has also had action in the Formula Renault 2.0 NEC, ensuring that points were off the table for him. Despite this, he picked up a win in race one and three as well as all fastest laps. On both occasions he’d be joined by Martins and Florian Venturi in second and third as the trio begin to look toward next season.

Reverse grid race two would provide some interesting encounters though, as former championship leader Arthur Rougier failed to overcome Jean-Baptise Mela for his first victory, as it was a maiden podium for Ugo de Wilde.

It would be a close qualifying session for the field as a single second separated third to the back of the grid. The trip to Spain had seen a record grid for 2017 of seventeen cars, though it would be Milesi and Martins breaking away at the front.

The pair would finish within a tenth of each other, with Milesi edging out his rival for a double pole position. It would be Florian Venturi who finished best of the rest, as the only other driver under the 1min 54sec mark. Completing the top six would be Hugo Chevalier, Christian Munoz and a seasons best from Ugo de Wilde in sixth. 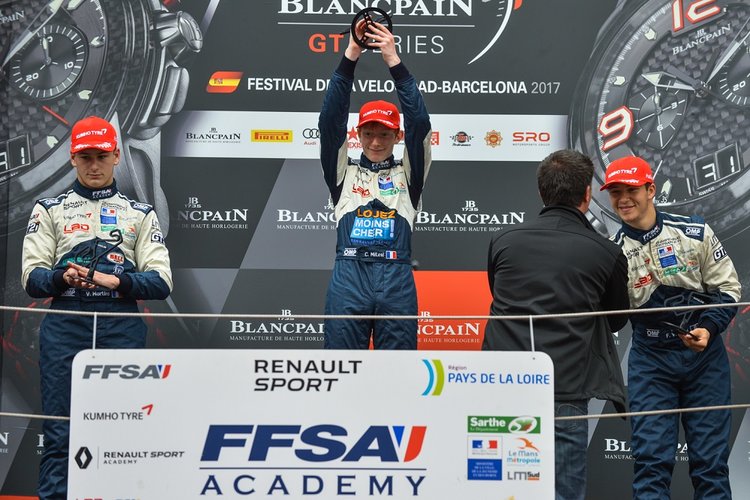 Charles Milesi was the man to beat in Catalunya (Credit: KSP Reportages / FFSA)

As the sun beat down on the Circuit de Catalunya, it would be Victor Martins who would chase Charles Milesi off the line. An incident free race eventually saw the pair, along with Florian Venturi in the latter stages, break away from the field. While the midfield order remained up in the air until the final few laps, the leader remained mostly static with Martins knowing he’d collect 25 points either way.

Milesi eventually took the flag with Martins and Venturi close behind to complete one of the strongest podiums of the year. In the battle for fourth, it was a stunning drive through the order from Javier Gonzalez taking three places and even catching up with the dropping Venturi in the final lap.

After a poor start, Hugo Chevalier would be another driver fighting his way back up and overtook Christian Munoz to inherit fifth place as Ugo de Wilde took his best result to-date in seventh ahead of series leader Arthur Rougier.

Having finished tenth in race one, it was a golden opportunity for Mela to pick up a podium in the reverse grid encounter. Arthur Rougier’s poor result in race one ensured he would start third and was favourite to take the flag, but could only maintain his position off the line.

A few laps stuck behind Thomas Drouet was not what the punters expected. While he did eventually get past, Mela had long since run off up the road leaving Rougier in a lonely second. As for Drouet, he was forced to sacrifice a solid result after a technical issue.

Mela eventually took the flag with Rougier finishing ahead of Ugo de Wilde having taken advantage of a battle in the closing stages. This punted Hugo Chevalier into fifth as Victor Martins reduced the damage in the championship by collecting fourth place. Finally, sixth would go to Florian Venturi as the Frenchman aims for third in the standings due to Milesi’s inability to score.

The final race proved to be a similar story to that of the first, with Charles Milesi again on pole position. Dark clouds would linger for the Sunday encounter, but remained dry as the 16-year-old polesitter broke away.

The interest remained over second place though, with Florian Venturi taking the place off the line. Hugo Chevalier almost followed him through, but Victor Martins maintained third, before eventually scything past Venturi in the closing laps. This ensured the podium was the same as race one with Chevalier following them across the line.

Fifth would go to the ever impressive Ugo de Wilde, completing a stunning weekend for the Belgian driver after holding off Javier Gonzalez. Rounding out the top eight would be Christian Munoz and Arthur Rougier, with the latter losing his championship lead as result of the poor weekend. This means it will be a straight showdown between Martins and Rougier going into Paul Ricard.

By Paul Hensby
10 Mins read
The Checkered Flag looks back at the race weekends in Pau for EuroFormula Open and French F4, Autopolis for Super Formula and Misano for Italian Formula 4.
French F4Super Formula

By Connor Jackson
10 Mins read
TCF takes a look at the FIA Formula 4 series and the new stars that emerged from the around the world in 2018.