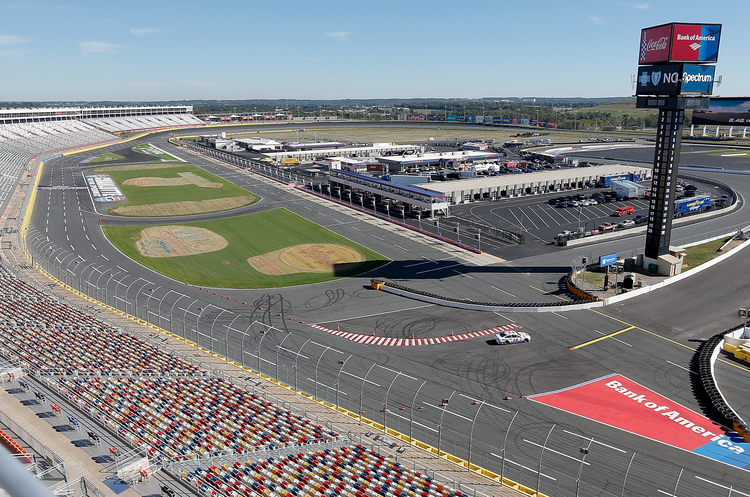 Several drivers from the Monster Energy NASCAR Cup Series have had their first taste of the road course layout of Charlotte Motor Speedway that will be featured on the 2018 calendar. The drivers were taking part in a Goodyear tyre test at the circuit, as the teams, drivers and the tyre supplier prepare for the new challenge.

Charlotte Motor Speedway announced back in May that from 2018, their October event, the Bank of America 500, would be changing from a race on the speedway to a race on their road course. The news was largely praised by fans, as not only will Charlotte’s ‘ROVAL’ be the third road course race on the calendar – alongside Sonoma and Watkins Glen – but it will also be one of the ten playoff races; making the event a potentially key moment in the championship battle.

Since the announcement, the circuit has undergone some renovation and reconfiguration, most notably the addition of two chicanes on both the front and back straight-aways; just before and just after the final two banked turns that make up the speedway. The layout currently planned for use next year features eighteen turns over its 2.42-mile length. However, the circuit layout is still up for some redesign if further testing shows some flaws in the current design.

The major takeaways from both Truex Jr and Busch’s reactions after the test were that the Charlotte road course is a unique challenge for the NASCAR Cup Series teams and drivers.

“There’s all kinds of craziness going on,” Truex said to the press after the test, “Turns 1 and 2 are pretty wild, narrow with concrete walls on both sides. Intimidating.

Whilst Busch also labelled the circuit as unique, he also outlined some possible improvements to the track, which he claimed was “much slower than anticipated.” He recommended changes to several corners layouts to raise the average speed of the cars, whilst also concurring with Truex Jr who had voiced a requirement for further safety features such as kerbs, tyre barriers and more.

“There’s no room for taking a break or having a quick, deep breath down the straightaway,” Busch said. “As soon as you’re in high gear off turn 2, you’re in a chicane. Back through the gears, you’re downshifting on the brakes to go to the front stretch chicane. It’s a very busy track.”

“Maybe there’s a chance … to reconfigure a little bit of the track to go straight from Turn 7, skip 8 and go to 9. That way we will have one less slow section.

“That, I think, would help the flow of the track as well as the exit of the infield section out onto the big oval. It would create more of a speed feel as well as eliminate one of the super slow corners … frankly, a 3,500-pound car going 35 mph too many times isn’t all that exciting so we need to maybe need to speed up the track a little bit.”

It is expected that another test will be held at a later date for all the Monster Energy NASCAR Cup Series teams to attend. In the meantime, circuit officials, race teams and drivers will be going over what they learned from today’s test so that they can prepare for what could very well be one of 2018’s most anticipated NASCAR Cup Series races.