WRC2 – Tidemand Steers Clear of Chaos To Lead in Wales 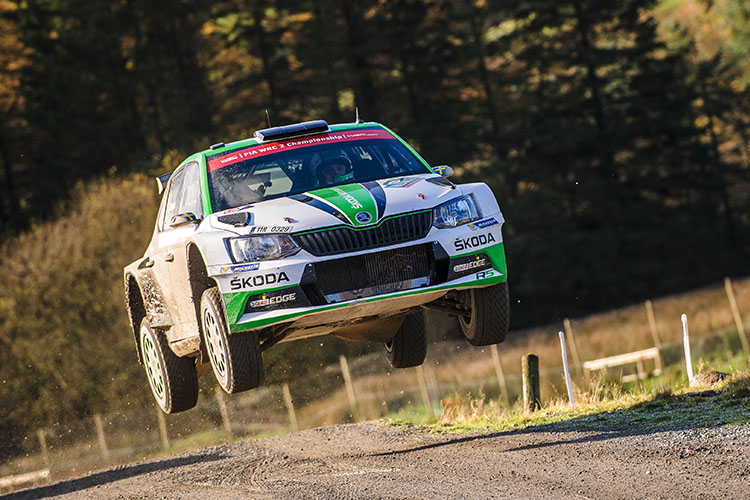 Tidemand led from the beginning, wasting no time in consolidating the slim lead he established in the previous day’s rally opening superspecial, going fastest in four of the day’s six stages.

Pandemonium beset the Swede’s closest rivals, picked off one by one by the immensely slippery conditions on the trio of stages. Eric Camilli weathered the storm most effectively to hold second place, despite a ten second penalty for being late to the start of the fourth stage.

The Frenchman was furious at the end of the morning loop, blaming a marshalling mix-up for his decision to start the stage a minute later than scheduled.

Only 3.3 seconds off Camilli’s pace was Tom Cave, the Brit making a return to the wheel of a Ford Fiesta after his previous appearance with a customer Hyundai in Finland. His day was not drama-free either, the engine of his Fiesta cutting out during the second pass of Myherin and requiring a power cycle whilst rolling down the road on inertia alone.

Tidemand’s main competition for victory was removed from the equation early on, as Teemu Suninen lost nearly three minutes stopping to replace a punctured tyre in the first pass of Hafren when only 7.8 seconds off the lead.

This moved the second factory Škoda of Ole Christian Veiby into second, but he fell by the wayside one stage after Suninen, rolling his Fabia R5 onto its roof and retiring on the spot.

Kalle Rovanperä‘s much anticipated WRC2 debut came to an unfortunate end after a difficult series of stages. The 17 year old hit a rock in the opening Myherin test, picked up a puncture in the first run of Hafren, then retired with a punctured radiator 8.4 kilometres into the afternoon re-run of Myherin.

Fellow Fiesta competitor Pedro Heller had a similarly nightmarish start, rolling his car in the opening stage and dropping nearly three minutes. He dropped another two and a half minutes at the end of the morning loop, complaining his differential settings were making his car extremely difficult to drive, and topped it off with a puncture in the Myherin re-run to leave him over 17 minutes off the front.

A left rear puncture plus front right damage for Emil Bergkvist and a front-end collision for Łukasz Pieniążek thinned the herd further, and new Hyundai junior recruit Jari Huttunen – not registered for WRC2 points but still competing in R5 machinery – retired on the road section towards remote service.

The ensuing chaos allowed Eyvind Brynildsen to move into fourth place, the former SWRC regular making only his second WRC2 appearance of the year after Rally Sweden. Issues for the championship regulars also allowed David Bogie to break into the top five, the first car over a minute off the lead.

Pierre-Louis Loubet went off the road in the day’s opening test and dropped fifteen seconds and down to thirteenth place, but moved into sixth over the course of the day as those ahead fell by the wayside.

Juuso Nordgren in seventh led a train of Brits completing the points positions. Matt Edwards, who finished third overall in the British Rally Championship this year, holds eighth on his WRC2 debut, ahead of Gus Greensmith, who dropped time near the end of the morning loop with a pop-off valve issue limiting his engine’s power output.

Series returnee Matthew Wilson rounded out the top ten in his first rally since May last year, coping with an engine issue in the day’s first test similar to Cave’s later incident.

Simone Tempestini had been slowly climbing towards the points places during the afternoon loop, but failed to start the day-ending Myherin rerun due to a technical issue and retired from the rally. This promoted Suninen back to 11th after his morning woes, though the Finn is nearly a minute behind Wilson.

By Pontus Lindroos
1 Mins read
The 2019 JWRC champion Jan Solans has announced the programme for his 2022 WRC2 Junior season.
WRC2