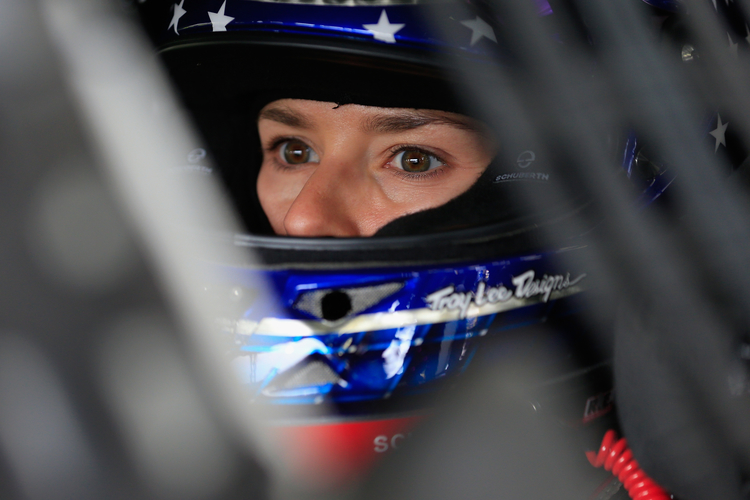 Danica Patrick has confirmed today that she will not race full-time in next year’s Monster Energy NASCAR Cup Series. Patrick, who announced her split from current team Stewart-Haas Racing earlier this year, has not been able to secure a full seat and will instead be aiming for a part-time schedule.

Patrick announced the news in a press conference at Homestead-Miami Speedway, where the final race of this year’s NASCAR Cup Series will be held this weekend. Shortly after beginning the conference, Danica started to shed tears as she thanked those who gave her a break in NASCAR a few years ago.

“So, this will be my last season as a full-time driver,” Danica began, before getting emotional. “My sister told me I was supposed to get emotional. I said I wouldn’t.”

“But I’m grateful for all the opportunities. I’m thankful for Dale [Earnhardt Jr] and Kelly [Earnhardt] and Bob Parsons from GoDaddy for getting me into NASCAR. Thank you to Tony [Stewart] and Gene [Haas].”

Danica made her first appearances in a NASCAR National Series championship whilst running a part-time NASCAR XFINITY Series schedule in 2010 and 2011. She ran for JR Motorsports, the team run by Dale Earnhardt Jr and his sister Kelly. At the end of 2011, Danica left IndyCar to join JR Motorsports for a full-time campaign in the XFINITY Series for 2012. She would end the season tenth in points with four top-ten finishes.

Throughout 2012, Danica made a number of appearances in the NASCAR Cup Series with Stewart-Haas Racing, which culminated in her landing a full-time ride in the team’s #10 Chevrolet for 2013. On her full-time debut at the Daytona 500, Danica would take a historic pole position and would go on to lead the race before finishing in eighth place.

Danica would remain in the #10 for five full-time seasons, garnering seven top ten finishes with a best finish of sixth at the 2014 Oral-B USA 500 at Atlanta Motor Speedway. However, her results compared to her team-mates were lacklustre at best. Sponsor issues began to creep their way in, which eventually culminated in Stewart-Haas Racing announcing that Danica would not be remaining with the team for 2018. Instead, they picked up Aric Almirola to take over the #10 car, adorned with his long-time sponsors Smithfield Foods.

It was thought that Danica was searching for a full-time ride for 2018, but she insisted on numerous occasions that if she couldn’t find a competitive seat, she’d stop racing. Ultimately, it seems, no full-time seat was on offer, paving the way for the end of her full-time career.

Following the announcement of her departure from the sport, Danica announced that she be ending her racing career by taking part in two more races. Next year’s Daytona 500 in February, followed by a return to IndyCar for the Indianapolis 500 in May.

“I’m really excited about that,” Danica said, “I think it’s going to be a great way to cap it off.”

Danica stated that she never thought she would make a return to the Indy 500, where she races seven times, finished in the top ten six times and took a best finish of third place in 2009:

“I always thought in my head never, but I never said never because I know better and thank God because here I am,” Danica said of her IndyCar return,

“He [Alan Zucker, Danica’s agent] called and just said ‘What about finishing up at Daytona? I don’t know where it came from but then out of my mouth came, ‘What about Indy?’ I don’t even know why I said it necessarily. It was really sort of the first idea that got me really excited. That was it.

“It just came from my heart. I think it’s going to be awesome.”

It is not yet known which team(s) Danica will race for in the Daytona and Indianapolis 500 races next year, with Patrick stating that she was still in the final stages of negotiating the deals. In the meantime, she has one last race to run in the #10 Stewart-Haas Racing Ford Fusion this weekend at Homestead-Miami Speedway in the Ford EcoBoost 400.

Rosenqvist on Texas crash: “I had a really good shot there and...