On April 30, 2017, Joey Logano scored his eighteenth Monster Energy NASCAR Cup Series victory at Richmond Raceway. 364 days later, on April 29, 2017, he finally returned to Victory Lane as he triumphed in the GEICO 500 at Talladega Superspeedway.

A pair of Stewart-Haas Racing drivers occupied the front row as Kevin Harvick qualified on the pole for his first restrictor plate pole since the 2005 spring Talladega race, while Kurt Busch recorded his first career top-two start at a plate track. It did not take long for Busch to experience problems as his car began having radio issues prior to pace laps, resulting in a helmet change before he caught up to the field for the green flag.

Harvick led the race early as Busch dropped to the inside line behind him and the field separated into two packs. The two, along with other drivers, pitted on lap 14, where Busch’s day worsened when he was penalized for being too fast entering pit road. With the leaders pitting, Alex Bowman led William Byron, Darrell Wallace Jr., Kyle Larson, and other drivers who preferred to stay out. Wallace took the lead on lap 39, though he pitted shortly after, which placed the Team Penske duo of Brad Keselowski and Logano at the front.

As the first stage came to a close, the top nine built a massive advantage over the others; ninth-placed Harvick led the tenth-placed Jimmie Johnson by over seventeen seconds. Keselowski went on to win his fourth stage of the year, ahead of Logano, Martin Truex Jr., Kyle Busch, Paul Menard, Denny Hamlin, Ryan Blaney, Ricky Stenhouse Jr., Harvick, and Johnson.

The Penske pair of Keselowski and Logano remained at the head of the field for the start of Stage #2 on lap 62, with the former’s outside line proving superior. Behind Keselowski was Byron, who passed him for first as they exited turn four. As Byron ducked to the inside, Jamie McMurray had a run on the outside, though Keselowski reclaimed the lead when Byron moved back up. Byron would eventually retake first when the leaders pitted on lap 68, though it was brief as he would do the same a lap later, which placed Matt DiBenedetto at the head. Keselowski, Stenhouse, Daniel Suárez, and Bowman all suffered penalties for speeding on pit road.

On lap 72, the first wreck of the day occurred on the backstretch. Erik Jones was clipped by McMurray, causing him to turn up and hit Trevor Bayne. Truex and Larson also suffered damage as they and Bayne collided with the inside wall. DiBenedetto pitted under caution, which allowed Logano and Menard to occupy the front row fore the restart on lap 79. Logano led until Hamlin passed him with Menard’s support on lap 96. Hamlin and Menard dueled for the lead as the stage entered its final laps, the latter victorious as Hamlin began to plummet, eventually dropping out of the top ten entirely. By the green-checkered flag, Menard won his first career stage, followed by Logano, Blaney, Harvick, Stenhouse, David Ragan, Johnson, Kurt Busch, Byron, and Kyle Busch.

Although Chase Elliott won the race off pit road ahead of Byron, he had missed his pit stall and was forced to return to the pits. Meanwhile, Kyle Busch was too fast entering and had to serve a pass-through penalty. With Elliott now at the rear, Byron led the field to the start of the final stage, with Blaney behind him. As the two drove on the inside, Kurt Busch rocketed to the lead on the outside line on lap 124, while Byron and Blaney made contact. Byron eventually sank through the field as Busch led Stenhouse.

A caution for debris came out on lap 129, with Menard hitting it. Menard’s luck continued to drain when he was penalized for an outside tire violation, as was Elliott. Stenhouse led Hamlin to the restart on lap 133. The reigning race winner adopted an aggressive blocking strategy, but failed as Hamlin took the lead anyway. Kasey Kahne, seeking his first top ten of the season, moved up to second behind Hamlin.

Logano took the lead on lap 138 as Keselowski joined him at the front, with the two Penske team-mates re-igniting their battle. On lap 145, the leaders entered pit road to service their cars, placing Suárez at the front. Hamlin and Stenhouse were caught speeding and had to serve pass-through penalties; to add insult to injury, Hamlin was penalized for speeding a second time, resulting in a stop-and-go. Suárez also fell victim to speeding through pit road as Logano was cycled back into the lead. After the end of green flag stops, the top five consisted entirely of Fords, with the manufacturer seeking its sixth straight Talladega race win. 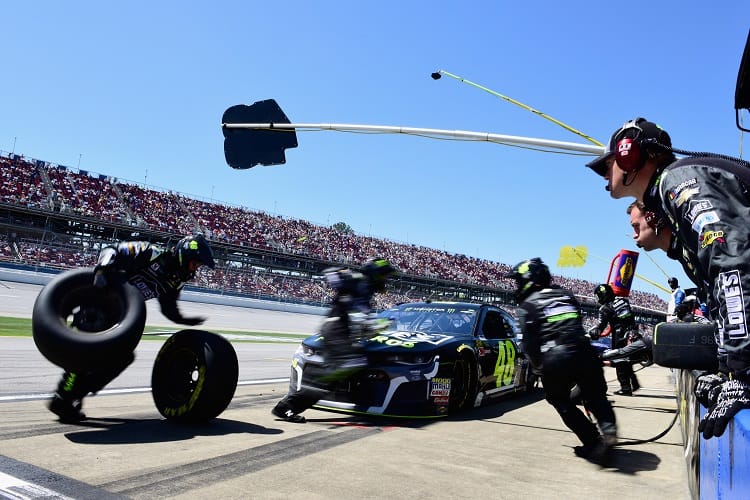 On lap 154, Timmy Hill brought out the caution for an engine failure. The leaders elected to stay out as Logano and Aric Almirola comprised the front row for the restart five laps later.

The restart took place with 17 laps to go as Logano remained in first. The grid separated into outside and inside lanes as Elliott and Logano led them, respectively. Logano’s line pulled ahead as they ran single file for the remainder of the race. Seeking to make a move, Kurt Busch passed Harvick for second with two laps left, but could not catch up to Logano.

Busch finished second, ahead of Elliott, Harvick, Stenhouse, Ragan, Almirola, Bowman, Newman, and Suárez. The sixth-place finish is Ragan’s best run of the season and his first top ten of 2018. Other finishers of note include D.J. Kennington in twentieth for his first top twenty of the year, Brendan Gaughan finishing twenty-second in his second race of the season, and Timothy Peters finishing twenty-third in his Cup debut.

For Logano, the win snaps a 36-race winless streak. It is his third win at Talladega and first since 2016. With the win and Kyle Busch finishing thirteenth, Logano has narrowed the distance between him and the points leader from 56 points to 30.

Next week, the Cup Series travels to Dover International Speedway for the AAA 400 Drive for Autism. Johnson is the defending winner.

Jennifer Jo Cobb not approved for Cup debut at Talladega

By Justin Nguyen
2 Mins read
Rick Ware Racing had signed Jennifer Jo Cobb for her NASCAR Cup début at Talladega this Sunday, but NASCAR has not approved her to race for various reasons.
NASCAR Cup Series