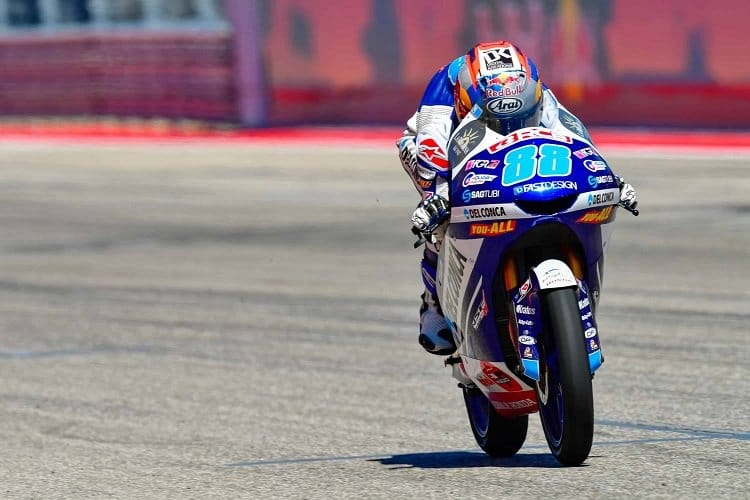 Jorge Martin broke away from a fierce pack of riders to claim victory in Sunday’s Moto3 Grand Prix of the Americas. The Spaniard proved too strong for Enea Bastianini, taking the championship lead in the process, with a frenetic fight for the final rostrum position going down to the very last corner.

The early stages of the race provided the platform for some unlikely names to challenge for the lead with Sky VR46 rookie Dennis Foggia hitting the front on lap three. Unfortunately for the Italian, his fortunes would take a nose dive later in proceedings as he fell all the way out of the points as the pre-race favourites took over.

Martin grabbed the lead decisively with six laps to go, outbraking Marco Bezzecchi and Fabio Di Giannantonio into turn twelve, and the Spaniard’s relentless pace eventually stretched the leading group out. Bastianini responded quickly, moving straight through into second, but the crucial slipstream had been lost and Martin wouldn’t be brought back.

In the battle for third, Di Giannantonio looked to have taken control with a late-braking move on Bezzecchi at the start of the last lap but the no.21 was swallowed up by Philipp Oettl on the back straight towards turn twelve. Their squabbling allowed Bezzecchi to ghost through and despite a desperate last-corner lunge from Fabio, the Argentine winner would claim his second consecutive rostrum.

Andrea Migno took advantage of Di Giannantonio’s late desperation to steal fourth with Oettl relegated to sixth in the end. Jakub Kornfeil stormed through from 21st on the grid to seventh, beating pre-race championship leader Aron Canet in the process, while Tatsuki Suzuki and Livio Loi rounded out the top ten.

Andrea Migno takes Pole at the final round of the season

Binder wins a thriller at Aragon ahead of a charging Navarro