The Hyundai proved to be a very quick package. Credit: WTCR

After another highly successful qualifying session for the Hyundai teams earlier on Sunday morning, Gabriele Tarquini and Yvan Muller lined up on the front row of the grid, with Norbert Michelisz and Thed Bjork just behind. As we would see, the South Korean marque would remain at the sharp end of the field until the chequered flag was waved.

As he did in Race 1, Tarquini got off the line the quickest, but behind him there was trouble. As Yvan Muller bogged down somewhat, he defended resolutely from the on-rushing Norbert Michelisz. Contact was made, causing the Hungarian to brush along the pit-lane wall, though thankfully neither car picked up serious damage. This played neatly into the hands of Thed Bjork. Seeing that Muller and Michelisz had slowed each other down, Bjork swept around the outside of Turn 1 to jump from fourth on the starting grid up into second position. Michelisz would rue Muller’s aggression as he also lost out to the Honda of Yann Ehrlacher.

To the right, Yvan Muller can be seen cutting across the front of Norbert Michelisz. Credit: WTCR

A common feature of the Moroccan event was brake failure. In conditions which TCR-spec cars had never before been raced in, Audi in particular were having trouble keeping their cars in working order. Triple British Touring Car Champion, Gordon Shedden, was the first to suffer in Race 3. On the entry to Turn 7 on lap five, Shedden’s RS3 LMS TCR shot down the emergency escape road with its brake calipers highly worn. At the same corner later on in the race, Frederic Vervisch suffered the exact same issue. This time though, he miraculously avoided spinning out Pepe Oriola‘s Cupra TCR in the braking zone, despite making contact with the rear of the Spaniard’s car.

For Vervisch and the Comtoyou Racing squad, it had been a World Touring Car Cup debut to forget. Brake failures had seen him retire from the latter two of the three races, while contact in Race 1 meant he didn’t finish that either. His team-mate, Denis Dupont, also had to sit out Sunday’s races after a brake failure for his car led to a major shunt in qualifying. 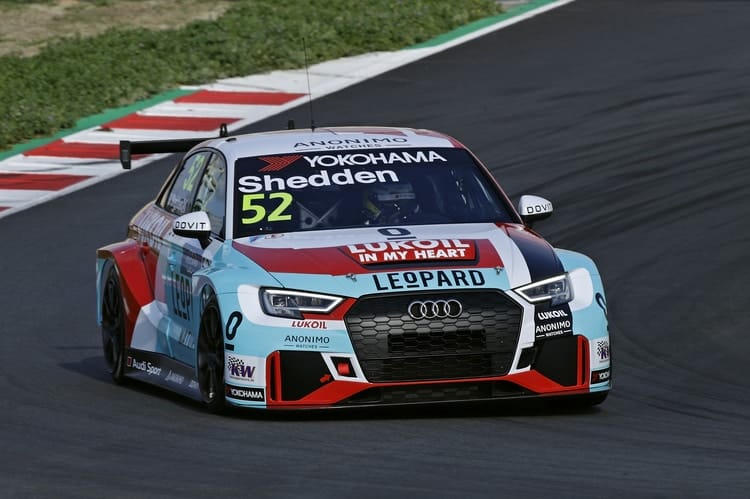 With Vervisch’s car stranded, the safety car was deployed. Once the race got going again, Tarquini led the pair of YMR Hyundai i30N TCRs by a safe distance and Yann Ehrlacher had now even begun to challenge his uncle, Yvan Muller, for third place.

In the mid-pack, Esteban Guerrieri and Pepe Oriola would battle for tenth – the final points-paying position. Oriola would come out on top, and soon his team-mate John Filippi was up alongside Guerrieri heading into Turn 11. But, as Guerrieri moved across to the outside of the track, he contacted the front of Filippi’s Campos Racing Cupra TCR. In doing so, the Argentine was spun off the track as Filippi inevitably had to turn into the left-hand corner. The Munnich Motorsport driver was far from impressed, however it must be said that it’s hard to point any blame at John Filippi.

With about a quarter of the race left to go, the safety car made its final appearance of the Moroccan event. Battling outside of the top ten, Nathanael Berthon moved across the front of Mat’o Homola‘s Peugeot as the pair exited the chicane complex. Berthon got all out of shape as a result, swerving from one direction to the other, and eventually came to rest after bumping into the left-hand side concrete wall. With Berthon’s stricken Audi stuck facing the flow of cars side-on, the race had to be temporarily neutralised while marshalls got to work at removing it.

Tarquini, Muller and Bjork fended off the Honda of Yann Ehrlacher (back) to secure a 1-2-3 result for Hyundai. Credit: Francois Flamand/DPPI

With two laps to go, the safety car released the pack for a final sprint to the finish line. Gabriele Tarquini never looked phased out in front, while a brief mechanical failure for Thed Bjork meant that he dropped behind his YMR team-mate, Yvan Muller. The Swede was able to hold off Ehrlacher though, and so Tarquini led home a 1-2-3 result for Hyundai to round off a weekend which has identified the i30N TCR as the car to beat.

Heading to the Hungaroring for Round 2 of the 2018 World Touring Car Cup, Gabriele Tarquini is the championship leader with 62 points. In second place, Thed Bjork is 11 points behind the Italian, while Jean-Karl Vernay, Yann Ehrlacher and Mehdi Bennani round out the top five.