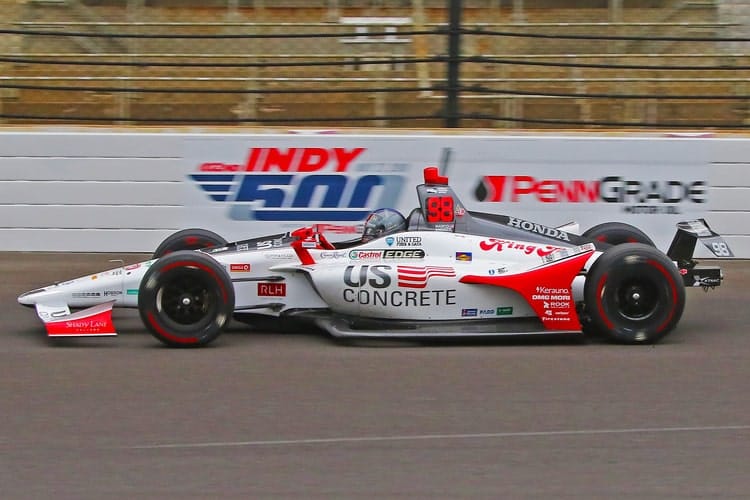 Marco Andretti of Andretti Autosport set the fastest time during the second day of practice for the Verizon IndyCar Series 2018 Indianapolis 500. The American in the #98 Andretti Herta Honda took over the top spot within the opening twenty minutes of the seven-hour session and continued to improve throughout the day, never relinquishing first place once he got there.

Andretti started out yesterday’s session by becoming the first driver to run an average lap over 226-mph this month. He would then go on to better that in the final two hours of the day, becoming the first to run a lap over 227-mph. He would end the day with the fastest lap-time of 39.6383-seconds (227.053-mph) and a total tally of 117 laps completed during the seven-hour session.

Many of the fastest lap-times came in the first two hours of the session, with most of the running for the rest of the day being dedicated to race setup work. The driver closest to Andretti was Scott Dixon in his #9 Chip Ganassi Racing Honda. He just over a tenth off of Marco’s fastest lap, with Scott setting an average lap speed of 226.329-mph.

Reigning Indianapolis 500 champion, Takuma Sato, was the third fastest driver of the session, with himself and rookie Robert Wickens both moving into the top five within the last half an hour of the day. Charlie Kimball put Carlin inside the top ten for the second day running. He was fifth fastest in the #23 Chevrolet, just ahead of Tony Kanaan in the #14 for A.J. Foyt Enterprises.

Earlier on in the session, Kanaan was the fastest driver to run a lap without being affected by slipstream, but he would later go on to improve his lap-time to a 225.740-mph average with the help of a tow. He would go on to be the only driver to stop out on track during the day, with the Brazilian veteran saying that he lost power. He returned to the track after a visit to the garage.

Gabby Chaves and Harding Racing were in the top ten again. Chaves was seventh fastest in the #88 car, with Ed Carpenter just behind in eighth place in the #20 for his team, Ed Carpenter Racing. Oriol Servia was ninth fastest in Scuderia Corsa‘s second day of track running. Sage Karam rounded out the top ten for Dreyer & Reinbold Racing.

Reigning Verizon IndyCar Series champion Josef Newgarden was eleventh fastest for Team Penske. The top eleven drivers were all from different teams, already highlighting how close the times are up and down the pit-lane. The driver that broke that chain was Danica Patrick, who was twelfth fastest for Ed Carpenter Racing.

A number of former IndyCar and Indy 500 winners remained further down the table, showing that the results of this week’s practice sessions cannot be taken as gospel when trying to work out who has the best chance of winning pole position and the race. Drivers like Helio Castroneves, Alexander Rossi, Will Power, Ryan Hunter-Reay, Simon Pagenaud, James Hinchcliffe, Sebastien Bourdais and Graham Rahal were all outside the top fifteen on the time-sheets. Those drivers and their teams may choose to fully show what speed they have in “Fast Friday”, the practice session where the boost on the cars is turned up to what it will be in qualifying on Saturday and Sunday.

Over three thousand laps were run during yesterday’s second day of running. The top three drivers on the “laps completed” list were Hinchcliffe on 129 laps, Carlos Munoz on 123 and Zach Veach on 120.

Finally, only one driver entered yesterday still having to complete their mandatory acclimatization test in order to be permitted to race. That driver was Stefan Wilson in the #25 Andretti Honda. He successfully completed his final stage of the test, meaning that all thirty-five drivers on the entry list are now eligible to race so long as they qualify inside the top thirty-three.

The third day of practice will kick-off later today, with another seven-hour session awaiting the entrants of the 102nd running of the Indianapolis 500.

The full Practice Day 2 time-sheets can be found by clicking the following link: http://www.imscdn.com/INDYCAR/Documents/5317/2018-05-16/indycar-results-p3.pdf

By Griffin Schmoyer
9 Mins read
With the 2021 NTT IndyCar Series about to begin, here’s everything you need to know ahead of a highly anticipated season.
IndyCar

By Paul Hensby
2 Mins read
Sébastien Bourdais topped day one in Indianapolis, but it was Josef Newgarden who ended the two day test with the fastest time overall.
IndyCar