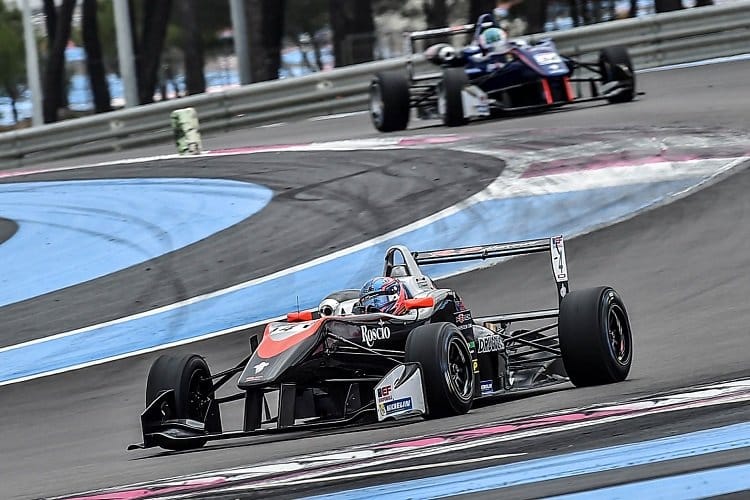 Felipe Drugovich dominated at the Circuit Paul Ricard for the second consecutive day as he marched to his third victory of the season on Sunday.

Starting from pole position, the RP Motorsport ace was untroubled as he got a much better start than fellow front row starter Matheus Iorio, and Drugovich closed out the afternoon with an advantage of 7.889 seconds.

Iorio claimed his third podium finish in second for Carlin Motorsport, with the team also seeing Cameron Das round out the podium positions after overcoming Guilherme Samaia early on after the Brazilian found himself running inside the top three.

Samaia ultimately was forced to settle for his second fourth-place finish of the weekend for RP Motorsport, although he was made to work hard for it by Alex Karkosik, with the Pole finishing less than half a second down on the Brazilian in the leading of the Campos Racing entries.

Karkosik had already passed Bent Viscaal for seventh before he took advantage of the scrap between Samaia and Das to leapfrog ahead of team-mate Marcos Siebert down the first half of the Mistral Straight, with the Argentine ultimately settling for sixth, with Viscaal the leading rookie in seventh for Teo Martin Motorsport.

Michael Benyahia came out on top of a great battle in the lower reaches of the top ten to claim eighth for RP Motorsport, with Jannes Fittje of Drivex School and Aldo Festante of RP Motorsport claiming the final points on offer, with meant both Christian Hahn and Calan Williams missed out despite being involved in the battle right until the chequered flag.

But no one had an answer all weekend long to the pace of Drugovich and RP Motorsport, who left Paul Ricard having led every lap of both races from pole position, with two fastest laps to boot.  He will head to Spa-Francorchamps next month with a forty-one point advantage over Iorio.