The first of three World Touring Car Cup (WTCR) races at Zandvoort was won by Munnich Motorsport’s Yann Ehrlacher. The move which would define the race’s result came during a starting procedure which can best be described as ‘untidy’. With stewards still attending to the Peugeot of Aurelien Comte, one of their counterparts waved the green flag regardless in order to give the cue to the officials to begin the starting procedure.

Somewhere along the line, something must have confused the drivers as Bernhard van Oranje and Benjamin Lessennes both overtly jumped the start. Question marks were also raised over the speedy getaways of Aurelien Comte and Tom Coronel, but unlike van Oranje and Lessennes, those two drivers were eventually deemed to be innocent of any wrongdoing by the stewards.

None of the VAG Group cars at the front got away from the line particularly quickly, which played nicely into the hands of Ehrlacher who launched himself ahead of the pole-sitter Rob Huff for the race lead. Another driver who profited hugely at the start was Aurelien Comte. The Frenchman had done a terrific job to qualify in seventh in his Peugeot, but after a demon getaway the 308TCR found itself in second place at turn one as Comte simply drove by everyone else on the outside line.

At the other end of the grid, Yvan Muller and Norbert Michelisz came to blows. On the inside line through the Hugenholtz bend, Michelisz’s attempted overtake resulted in the pair of Hyundai i30N TCRs locking their wheels together. Consequently, both drivers lost the ability to steer and speared off rather spectacularly into the crash barriers. With Muller’s car left straddling the barrier, two wheels in the air, the stewards were forced to bring the race to a temporary halt in order to clear up the wreckage.

Following the twenty minute stoppage, Ehrlacher got the race back underway from behind the safety car. Leaving Rob Huff behind in third, Comte kept as close as possible to the rear bumper of Ehrlacher’s Honda in the hope of being able to challenge for the lead of the race. Unfortunately for the Peugeot driver, he didn’t seem to have the pace to stay on close terms, and was soon back into the clutches of Rob Huff. Elsewhere, the news then emerged that Benjamin Lessennes and Bernhard van Oranje would have to serve a drive-through penalty for jumping the start. The Belgian quickly did so, but not before Frederic Vervisch ended up retiring to the grass verge while trying to overtake him.

In the Hyundai camp, things were getting even worse. Severely hampered for pace by the new Balance of Performance measures, and with Michelisz and Muller crashing out in the early stages, Gabriele Tarquini was the next Hyundai driver to fall by the wayside. Siting mechanical issues, the Italian gradually dropped right down to the back of the pack before retiring to pit-lane. For the former championship-leader, this signalled four straight races without scoring a single point. Given the stark lack of pace in the newly modified Hyundai, it’s hard to see that trend ending anytime soon either.

Up at the front, Gordon Shedden was kick-starting his WTCR career after a shaky start to life on the international stage. The triple British Touring Car champion had been held back in the early rounds of the season by a bizarre brake bias issue in his Audi. It was found that his RS3 LMS TCR had originally been the victim of a workshop mix-up; as the Cupra, Volkswagen and Audi TCR cars are all built by SEAT Sport, his car had erroneously been fitted with a part designed for the Cupra TCR. With the problem corrected, Shedden has seen an up-turn in pace at the Nurburgring, and here at Zandvoort. 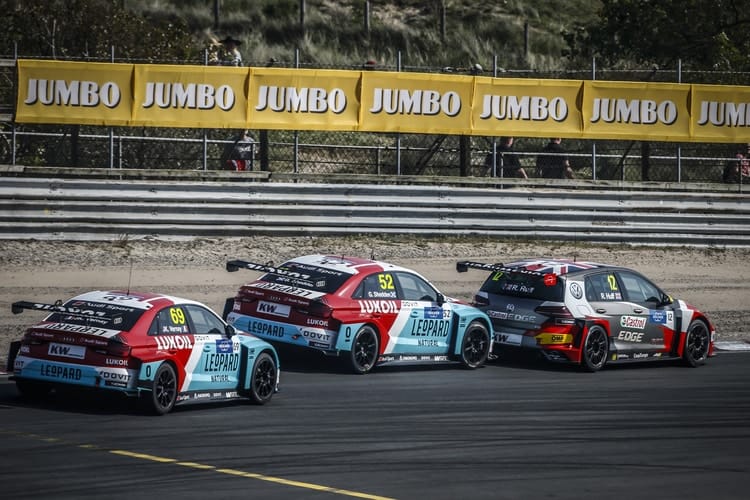 Having qualified in third position, Shedden was one of the drivers to be overtaken by Aurelien Comte on his start-line crusade. Now though, he had Rob Huff – and a potential first podium finish – in his sights. Heading into Turn 1, aka Tarzan, the Scotsman dived to the inside of Huff’s Volkswagen. It looked as though he may’ve made the move stick, but in actual fact Shedden ran too deep into the corner, therefore allowing Huff to get back past. Shedden’s team-mate Jean-Karl Vernay was now right on the tail of the British compatriots who continued to battle for third place, however the Frenchman never really got the opportunity to attack.

Pepe Oriola then retired to the pit-lane in his stricken Cupra TCR. Meanwhile, another Cupra was involved in bringing out the safety car. Battling in the lower end of the top twenty, Zsolt Szabo attempted to pass Fabrizio Giovanardi‘s Alfa Romeo on the inside line into turn one. Giovanardi wouldn’t go down without a fight however, and the pair ran side-by-side through the exit of the bend. Szabo then squeezed his fellow competitor slightly onto the grass. This was enough for the Italian to not be able to stop in time for turn 2, and so he slid across into the concrete barrier at Hugenholtz, narrowly avoiding contact with Szabo’s bright green Cupra. Unable to drive the car further, Giovanardi was left stranded in a dangerous position which led to the race being neutralised.

With the Alfa Romeo cleared out of the way, the race was reduced to a two-lap sprint to the chequered flag. Try as they might, nobody could make any further progress in the final stages however, and so the order remained as it was. Yann Ehrlacher controlled the race impeccably after overtaking Huff right at the start, while Aurelien Comte’s hugely impressive drive secured his – and Peugeot’s – first podium finish in the World Touring Car Cup. The home crowd were also treated to a seventh place finish for local Dutch hero, Tom Coronel, in what was one of his better races of the 2018 season. Aurelien Panis also did well to score his first championship points by crossing the line in tenth place.