Andretti Autosport‘s Marco Andretti set the quickest time in yesterday’s Verizon IndyCar Series “Fast Friday” practice session for the 2018 Indianapolis 500. The American set the fastest time of the week so far and will head into today and tomorrow’s qualifying session hoping to take pole position for next week’s race.

The traditional “Fast Friday” session saw the teams of the Verizon IndyCar Series turn up the boost on their cars to replicate the speeds that they will hit in qualifying. As a result, we did not have to wait too long to see a new fastest lap of this week’s practice sessions.

Josef Newgarden was the first to beat Marco Andretti’s previous benchmark that had been set on Wednesday. His stint at the top did not last long though, with Chip Ganassi Racing‘s Ed Jones moving into first place with the first 228-mph lap of the month.

Marco Andretti then took the average lap speeds up two more notches, setting the first 229-mph lap, closely followed by the first 230-mph lap within minutes of each other. Spanish driver Oriol Servia then put in an unexpected fast lap to put himself on top with a 230.247-mph run in the Scuderia Corsa #64 car.

Rookie Robert Wickens was keen to show that he was getting the hang of driving at Indianapolis Motor Speedway. On only his second flying lap of the day, he would lift himself into first place with the first 231-mph lap, only for Marco Andretti to beat him by just one-hundredth of a second to re-take the top of the time-sheets.

From there, no one would be able to match Marco’s best time. His 231.802-mph lap would stay at the top of the scoring pylon for the remaining hours of the session; earning him and his Andretti-Herta team a $10,000 prize as a result. Robert Wickens would remain in second place, with Ed Carpenter taking third place by the end of the day’s running.

Oriol Servia’s aforementioned strong run was enough to put him and Scuderia Corsa in fourth place on “Fast Friday.” It was yet another great day for the team who will be hoping that they can continue to surprise when qualifying begins later today.

Fifth place went the way of Will Power, who set the fastest lap of the day that was not affected by another driver’s slipstream. The #12 Team Penske driver set a 229.780-mph lap, with his team-mates, Josef Newgarden and Simon Pagenaud locking out the top three of the no-tow time-sheets.

Sixth place overall would go to Dale Coyne Racing‘s Sebastien Bourdais. Just behind would be the A.J. Foyt Enterprises duo of Tony Kanaan and Matheus Leist in seventh and eighth respectively.

Stefan Wilson made his first appearance in the top ten this week, setting the ninth fastest time in the #25 car for Andretti Autosport. His time was four tenths off of Marco Andretti’s P1 time. Wilson and Andretti’s team-mate, Alexander Rossi, completed the top ten in the #27 Honda.

Further back, Kyle Kaiser completed the most amount of laps during the day. The American rookie ran sixty-two laps for Juncos Racing as he and the team continued to search for speed ahead of today’s qualifying session; which carries vital importance due to the slowest two drivers being eliminated from the grid for next week’s race.

Kaiser isn’t the only driver who will be worried heading into today’s “bump day” qualifying session. Toward the rear of the table in yesterday’s practice were drivers such as Pippa Mann, Max Chilton, Graham Rahal, James Davison and last-placed, Jack Harvey. They will be among a potentially large list of drivers who may well be bumped from the field today; such is the closeness of the times of all the drivers this year.

For the aforementioned James Davison, the worry was not the only problem. James was the second driver of the month to hit the wall, with his crash being much harder than JR Hildebrand‘s incident yesterday. Davison was running through turn two in his #33 Chevrolet when the rear stepped out from underneath him. He was sent spinning up into the wall, with the force of the impact being enough to briefly lift the car off the ground. The left side of the car was torn up and the gearbox was damaged, but thankfully James was unhurt in the crash.

The first day of qualifying for the 102nd running of the Indianapolis 500 takes place later today. A practice session will take place in the morning before qualifying starts. The session will see each driver in the field have three attempts at a four-lap qualifying run. The top thirty-three cars will be locked into the race, with the thirty-fourth and thirty-fifth placed drivers being sent home without a place in the race.

Following tomorrow’s session, the nine fastest drivers will compete in one session to set pole position, with the remaining drivers from tenth to thirty-third taking part in their own session to determine those positions.

Qualifying rarely plays a huge role in who wins the Indianapolis 500, but every driver will be giving it there all today and tomorrow to try and start the race as high up as they possibly can. 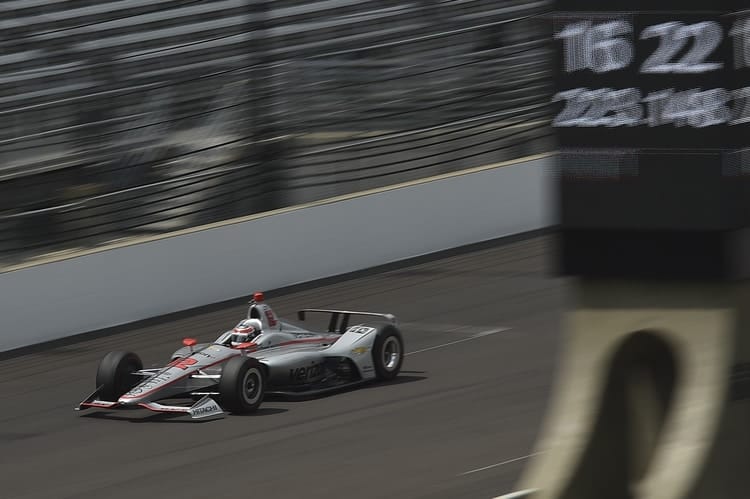 The full time-sheets for “Fast Friday” are available by clicking the following link: http://www.imscdn.com/INDYCAR/Documents/5319/2018-05-18/indycar-results-p5.pdf

Power on Indy GP misfortune: “We just need to put a full...