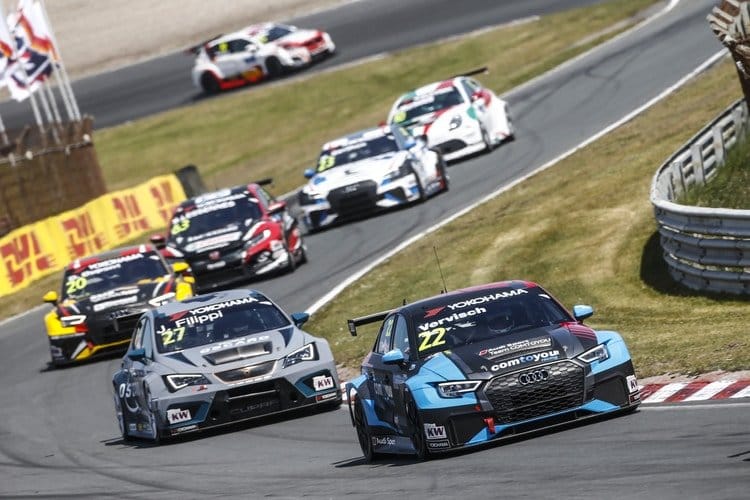 The 2018 FIA World Touring Car Cup (WTCR) is back in action this weekend after the huge four day festival that took place at Zandvoort in the Netherlands last month which turned the Drivers Championship upside down.

The historic street circuit of Vila Real plays host to rounds 13, 14 and 15 of the season and also marks the halfway point for this highly competitive series. Yann Ehrlacher in the Munnich Motorsport Honda Civic TCR leads the standings after a good points haul last time out.

The Checkered Flag previews the weekends action that’s due to take place on the first race on Saturday and the second and third races taking place on Sunday.

The Joker Lap has been confirmed to return for the three WTCR races and will surely shake up the field of twenty seven cars entered on the tight and fast street circuit. Whilst overtaking is possible, this option to make up places or lose places in each race offers a new aspect for the majority of the field.

Mato Homola is one of eleven drivers who will make his debut at Vila Real this weekend. Credit: Jean Michel Le Meur / DPPI

Amazingly, eleven drivers out of the twenty seven entries have not raced on this circuit before so this weekend will be a steep learning curve for them.

When you look at the list of debutantes for the Vila Real event though, some of these drivers have a lot of experience in car setup which will come in handy on the tight, fast and dusty Portuguese layout:

Also take into consideration that last year there were sixteen WTCC TC1 entries competing. This year sees twenty seven, so don’t be surprised if the Safety car makes an appearance or two which could potentially wreck a vital Joker Lap strategy.

The Hyundai teams will be hoping to make up ground on the Portuguese street circuit. Credit: Jean Michel Le Meur / DPPI

Ah yes, this one never gets old or boring. The mere mention of these three words this year has often sparked lively debate and I suspect will do once again at Vila Real this weekend.

Last time out at Zandvoort, the Hyundai’s were lucky to qualify inside the top twenty after the BoP adjustment that came into place seeing the ride height increased and the engine power reduced from 100% to 97.5%. This led to cries from both Yvan Muller Racing and BRC Racing that they felt this wasn’t being applied properly.

However when you take into consideration that the Hyundai i30 N TCR has taken five wins out of twelve so far against three for Honda, two for Audi and one each both for Peugeot and Volkswagen, its clear to see why this happened.

For the recent TCR Europe Series weekend at Spa-Francorchamps, BoP saw a reduction in ride height for the Hyundai’s but leaving them at the same maximum power setting. The Portuguese venue will be another intriguing weekend if you’re a Hyundai driver. Expect more lively debate about this subject.

Continuing the tradition that started out in Hungary earlier this year, the 2018 FIA World Touring Car Cup (WTCR) has announced its two local wildcard drivers in the shape of Edgar Florindo and José Rodrigues.

Florindo is also experienced with TCR as he has driven in the TCR Portugal Series, having claimed eight consecutive podiums and two victories last season. The local driver will be out in a Veloso Motorsport run CUPRA TCR as he tackles the event on the World Stage for the first time.

Florindo expressed his happiness on taking the chance to race with some of the worlds best tintop drivers that has been handed to him.

“I feel proud and very satisfied, I always like challenges and this is the biggest of my career yet” said Florindo.

“I will find some of the best touring car drivers in the world on the best circuit in the world, Vila Real. I always liked challenges and this is the biggest of my career yet.”

Rodrigues is already familiar with TCR machinery having raced a 2017 Honda Civic TCR in both Germany and Portugal. This year he is a full time entry in the TCR Italy Series with Target Competition who will be running his entry this weekend.

Meanwhile Rodrigues is taking this opportunity with both hands as he is already a part of Tiago Monteiro’s Skywalker Management company and is excited to race with the best in the business.

“Since I was a child, it was a dream to race in an FIA world-level event so I’m really proud.” said Rodrigues.

“It is the result of many years of effort and also the passion of those who have always supported me.”

*All times are given in the local timezone.

The Vila Real circuit, host to the fifth weekend of WTCR in 2018. Credit: FIA

You can watch the first qualifying session and race for free via a live stream which will be posted on the WTCR Facebook page.

Alternatively, if you live in Belgium, France, Italy, Portugal, Spain, Switzerland or the USA, then these streams can be found on OSCARO.com instead. Sunday and Monday’s events will be broadcast live on Eurosport.

However, if you can’t watch the racing on TV, we’ll have full reports of all the action right here on TheCheckeredFlag.co.uk.