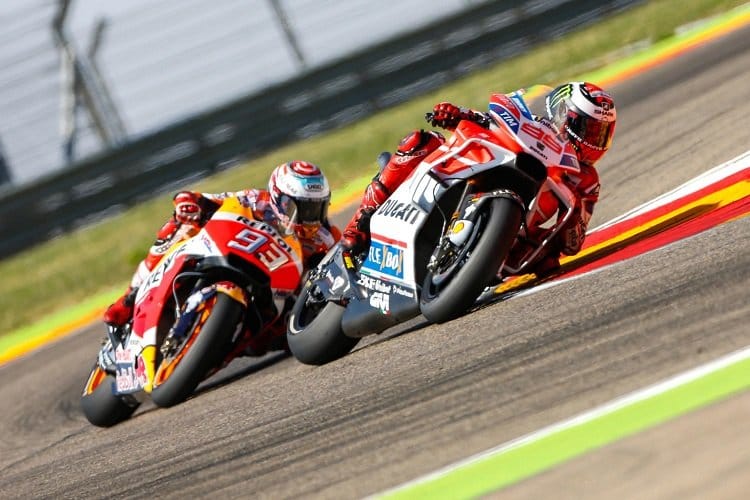 Lorenzo and Marquez will both be riding in orange next year (Photo Credit: MotoGP.com)

Jorge Lorenzo will switch to Repsol Honda for the 2019 and 2020 MotoGP seasons, setting up a mouth-watering team-mate combination with Marc Marquez. Lorenzo, a five-times world champion across all classes, will move across from Ducati to replace Dani Pedrosa whose departure was announced yesterday.

Lorenzo has endured a difficult time since leaving Movistar Yamaha for Ducati at the end of 2016. The Spaniard won his final race in blue at Valencia but hadn’t won since, until breaking his duck for the Bologna manufacturer at Mugello on Sunday. Despite making his Ducati breakthrough, decisions had long since been made that Lorenzo’s time at the team was coming to an end, forcing him to look elsewhere.

Initial rumours linked him with the vacant seat alongside Alex Rins at Suzuki but with that spot set to go to Moto2 hotshot and reigning Moto3 champion Joan Mir, that avenue was blocked off. Paddock rumours had also placed Lorenzo in a potential new satellite Yamaha squad backed by the Sepang International Circuit but today’s news will see him join the last of MotoGP’s big three manufacturers.

The signing brings together two of MotoGP’s greatest rivals of recent years into the same team, with Lorenzo having pushed Marquez all the way to the final round in the 2013 title chase. The pair also clashed at Jerez that season and have enjoyed many a close fight on track but with seven premier class titles between them, they form a formidable partnership at Repsol Honda next year.