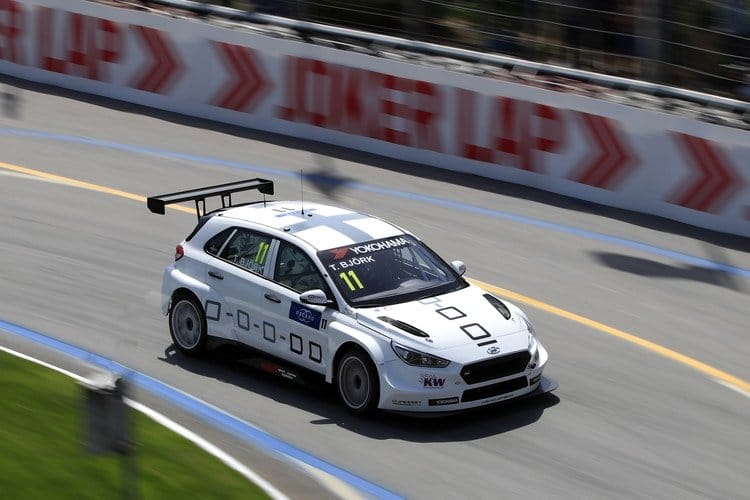 As the stand-out performer in qualifying, Thed Bjork lined up from pole position in the final World Touring Car Cup (WTCR) race at Vila Real. With the pace that he had previously shown, it was expected that the Swede would do enough to take victory in this race, and he didn’t disappoint. From start to finish, Bjork put on a masterful display to take his second victory of the 2018 season.

A little further back, Gabriele Tarquini – who is renowned for his ability to make quick starts – edged past his team-mate Norbert Michelisz off the line to take second place. However, not even Tarquini and Michelisz who had the same Hyundai machinery at their disposal could keep up with Bjork. In fact, when the reigning world touring car champion took his mandatory joker lap on lap three, he still managed to re-emerge ahead of the BRC Racing Team duo.

A mechanical failure for Norbert Nagy in the Zengo Motorsport Cupra TCR left the Hungarian stranded on track. Much to the annoyance of Bjork, who had a comfortable lead at this stage, this would result in the first appearance of the safety car during the race. That said, when the race was re-started a lap later, there was little doubt that Thed Bjork could stretch out a similar gap at the front.

Team Mulsanne had experienced an upwards turn of pace in their Alfa Romeo Giulietta TCR this weekend, and as a result, Fabrizio Giovanardi was able to launch an attack on Yvan Muller. Battling over tenth place, Giovanardi could sense the opportunity to claim his – and the team’s – first championship points of the season. Sadly though, the Italian got a little carried away it would seem. As he entered his joker lap, Giovanardi appeared to carry too much speed into the corner and hit the wall as a result, breaking his car’s suspension.

The joker lap has been a success at the Vila Real street circuit, providing a whole new tactical element to the races. Image Credit: Paulo Maria/DPPI

Consequently, the safety car appeared once again just two laps after it had been withdrawn so that the Alfa Romeo could be recovered. Then, with Gordon Shedden‘s Audi grinding to a halt on track, it was deployed for a third time with just a handful of laps to go. In the context of the race, this turned out to be quite crucial in the eventual running order by the time the chequered flag was waved.

Most of the field had left their joker lap until very late on in the race, and as the safety car had bunched the whole pack up together, this gave those who had already taken their slower joker lap a huge time advantage compared to everyone else. The main beneficiaries were Frederic Vervisch and Benjamin Lessennes. In truth the Belgian compatriots had experienced a difficult weekend so far, but when a hoard of cars in front of them dived into the mandatory joker lap, the path was cleared for them both to be catapulted into the top ten. The implementation of the joker lap, at a tight street circuit like Vila Real, has certainly created a whole new tactical variable for teams and drivers to contend with. Arguably, the spectacle of street circuit racing has been improved as a result.

At the front though, everything fell into place for Thed Bjork to take his second race win of the season, which has boosted him up to fourth place in the championship standings. His team-mate, Yvan Muller, currently leads the way while Yann Ehrlacher and Gabriele Tarquini are his nearest challengers in the points standings. Elsewhere, other notable performances in this final race came from the likes of Pepe Oriola and Mat’o Homola. Oriola’s fourth place in the Vila Real final, combined with his third place finishes in the two previous races, meant that this has been his most successful event of the season. Mat’o Homola, meanwhile, followed up his surprise race win in Race Two with a top five finish in Race Three.