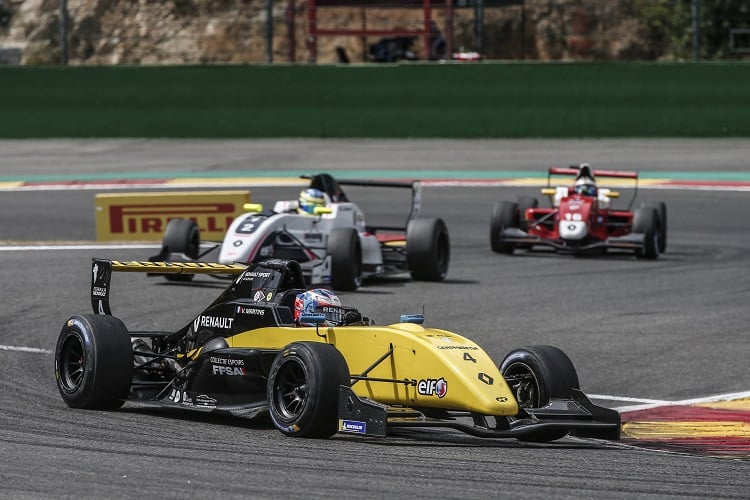 Victor Martins secured his second Eurocup Formula Renault 2.0 series victory as he was victorious in a delayed second race at Spa-Francorchamps on Saturday morning, while Yifei Ye’s podium ensured the Chinese driver left Belgium back on top of the championship standings.

Logan Sargeant led away from pole position and was a part of a three-way breakaway at the front of the field with Martins and Ye, with Martins making an early move for the lead on his R-ace GP team-mate into Les Combes.

Martins withstood the pressure from his team-mate until the chequered flag, while Josef Kaufmann Racing’s Ye made Sargeant work hard for second place, but third was enough to see him return to the lead of the championship as Christian Lundgaard could only finish down in eighth.

Lundgaard was running fourth early on but lost the draft from the top three, which left the MP Motorsport driver under threat from those behind, with JD Motorsport’s Thomas Maxwell the first of those to get ahead of him to take a season’s best fourth, while Maxwell’s team-mate Lorenzo Colombo claimed fifth ahead of Fortec Motorsport’s Arthur Rougier and R-ace GP’s Max Fewtrell.

Rougier made one tremendous move on both Lundgaard and Colombo down the Kemmel Straight, but the Frenchman saw the Italian repass him for fifth.

Arden Motorsport’s Oscar Piastri, a podium finisher in Friday’s opening race, claimed ninth on Saturday, while the final point went the way of Josef Kaufmann Racing’s Richard Verschoor, who was just able to keep Frank Bird at bay in the closing laps.

The safety car was needed before the end of the first lap when Arden Motorsport duo Sami Taoufik and Nikita Volegov collided at La Source, with the latter barrel-rolling before landing back on it’s wheels.

Unfortunately for Neil Verhagen, the incident also cost him a drive-through penalty as he was deemed to not have respected the safety car procedure, with the Red Bull-backed Tech 1 Racing driver ending down in twenty-second at the chequered flag as a result.

The final lap saw a final corner clash between Raul Guzman and Alexander Smolyar that saw the former crawl across the line with a broken suspension, while the latter was handed a two-place grid penalty for the first race of the Hungaroring at the beginning of September.

The final full-time NEC entrant, Sharon Scolari, failed to start after her race one crash, meaning only twenty-eight drivers took the start on Saturday.