Round eight of the 2018 FIA World Rallycross Championship takes place at the iconic circuit of Loheac in France, also known to Rallycross fans worldwide as the “Temple of Rallycross” and many fans will be making the journey there for a great weekend of action.

The 2018 World RX of France sees a full capacity entry of twenty five drivers for the first time this season, with Silverstone and Hell both having twenty three entries each. With this in mind, there are several topics to look forward to and The Checkered Flag discusses these further in this preview.

After the 2018 World RX of Canada, 2017 FIA World RX Champion Johan Kristoffersson has six wins from seven starts and is looking unbeatable.

The PSRX Volkswagen Sweden driver explained at the start of the season that he has been trying to find the Volkswagen Polo R’s sweetspot and many could argue that he found it straight away with two wins on the bounce in Spain and Portugal respectively.

With a fifty-five point lead in the Drivers Championship over the two Team Peugeot Total drivers of Sebastien Loeb and Timmy Hansen, it can be argued that Kristoffersson could now start to relax a little.

However with five rounds left to go and the increasing rate of development, anything could happen in World RX and be assured… Kristoffersson will cope with the pressure.

CAN THE REST STOP KRISTOFFERSSON?

Thats the big question… And Canada gave us a clue.

Whilst Peugeot have closed the gap, EKS Audi Sport have as well and this means that there’s a five way fight for second place in the Championship. However it also means that those five drivers will be looking for a chance of victory to gain an advantage and the only way to do that will be to stop Kristoffersson taking the win.

So far Sebastien Loeb is the only man to win a World RX event other than Kristoffersson but that could change in the last five rounds of the year in France, Latvia, USA, Germany and South Africa.

OMSE have made gains over the mid-season break and are looking to close the gap further. Credit: IMG / FIA World RX

Don’t count out the others either. GC Kompetition have already taken podium finishes this season and Janis Baumanis made the Final in Canada. OMSE and GRX Taneco have been regular Semi-Final contenders throughout the year and Marcus Gronholm‘s outfit have had several appearances in the Finals as well through his son Niclas.

For the first time this season, World RX has a full capacity grid of twenty-five cars and the ten drivers who are joining the regular entries are some of the best Rallycross talents world wide. British star Oliver Bennett returns from his recent Americas Rallycross adventures in the iconic BMW Mini SX1 as he competes at Loheac as one of the World RX guest stars.

MJP Racing Austria returns to World RX with a two car entry this time. 2013 BTCC Champion Andrew Jordan is back for his second event in 2018 in the further developed Ford Fiesta, whilst he is joined by team-mate Topi Heikkinen. 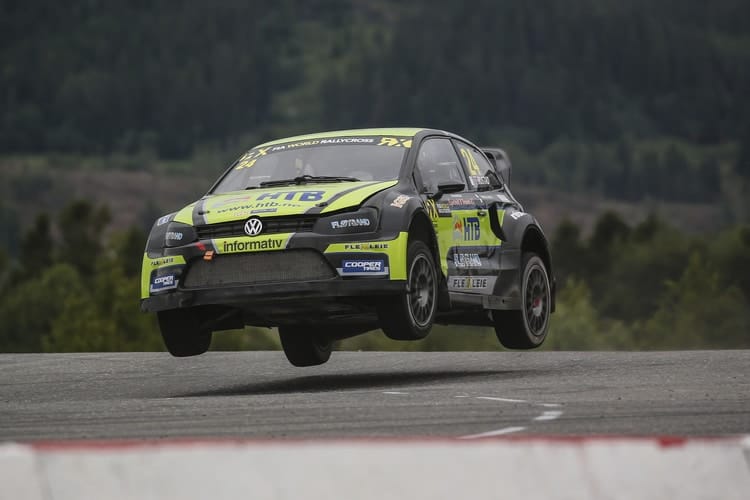 Tommy Rustad is back for his third round of World RX this season. Credit: Tony Whelan / McKlien

Heikkinen has been working hard with the Set Promotion team this season and he’ll be looking to get to grips with the car on familiar ground in his first event since South Africa last year.

Tommy Rustad is back for his third event of the season in the Marklund Motorsport Volkswagen Polo whilst the team runs Anton Marklund in the round of Euro RX taking place over the same weekend.

Timo Scheider returns in the Muennich Motorsport SEAT Ibiza he drove at Silverstone in the opening round of ARX, looking to upset the establishment after a good showing at the Speedmachine event.

There is a small entry of French Rallycross drivers taking part in their home World RX this year. Having already contested several events this season, Hervé “Knapick” Lemonnier is back in his Citroen DS3.

French Rallycross Championship regulars Gaëtan Serazin and Emmanuel Anne will both compete in Peugeot 208 WRX Supercars as they look to take on the might of the best in World RX at Loheac.

However the big talking point for the home fans is the return of World RX race winner Davy Jeanney, who will drive an updated Pailler Competition Peugeot 208 WRX in the event.

With several seasons of World RX experience behind him and an updated car to work with, expect the Frenchman to challenge for a Semi Final place on home turf. He is one of the many drivers out here most deserving of a place back in the World RX paddock so a good performance here could help out a lot.

CAN THE LIONS WIN AT HOME?

Loeb will be looking for a win on home turf. Credit: IMG / FIA World RX

Peugeot proved in Canada that the 2018 Peugeot 208 WRX Evolution is a step closer to the competition and with two cars on the podium, they will be looking for nothing less than victory on home ground.

Whilst Team Peugeot Total are in second place in the Teams Championship, having two cars on the podium at each of the remaining five rounds will help reduce the gap to their championship leading rivals.

With the gaps closed to PSRX Volkswagen Sweden and EKS Audi Sport, the French Manufacturer is looking good for taking the home win and if this happens, expect the whole of France to go crazy. Loeb has already taken a win this year in Belgium and is looking good for a second trip to the top step, but don’t count out Timmy Hansen.

Since the Evolution was introduced in Sweden, Timmy Hansen has been one of the drivers to push Kristoffersson the hardest. With lots of experience of the Loheac track, expect the Swedish driver to push his team-mate hard to take his first win of the year.