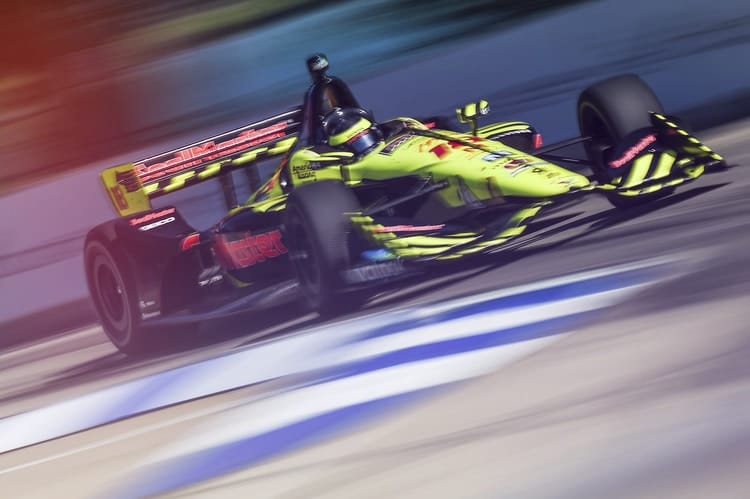 This weekend, the Verizon IndyCar Series will make a much-anticipated return to Portland International Raceway for the penultimate round of the 2018 championship; the Grand Prix of Portland.

With only two races left, this race could be crucial for the eventual outcome of the championship, with Scott Dixon hoping to end Alexander Rossi‘s run of consecutive higher finishes, which has seen Dixon’s points advantage trimmed to just twenty-six points. Here is everything you need to know ahead of this Sunday’s race.

What happened in the last Grand Prix of Portland?

Rain would hit the track on Saturday in time for the second of two qualifying sessions for the race, meaning that pole was effectively decided by the first qualifying session held on Friday. It was Justin Wilson who would reign supreme, taking pole position with a lap time of fifty-eight seconds exactly. The British driver was half a second slower than his lap record from two years earlier, which still stands today at 57.597 seconds.

Joining Wilson on the front row of the grid would be the Dutchman Robert Doornbos, with just over two-tenths of a second separating the pair. The next three drivers were all very close together, with Sebastien Bourdais qualifying third ahead of Alex Tagliani and Tristan Gommendy; all three separated by less than a tenth of a second.

The race held the unique accolade of being the first Champ Car race in history to see a standing start instead of a rolling start. There had been worries that this could lead to a dramatic start, but that was not to be the case, as the field got away cleanly.

Wilson led the opening stint of the race, but Bourdais gained the upper hand by saving fuel and extending his first stint way further than anybody else. As a result of this, his Newman Haas Racing team were able to perform a much faster pit-stop as they had less fuel to put back into the car. Bourdais would rejoin the race in second place and would eventually pass Wilson for the lead later on in the race.

Bourdais would go on to have an easy run to the chequered flag. He would take the win by with over a thirteen-second gap to Wilson in second place, with Doornbos a further seventeen-seconds back to take the final spot on the podium. Will Power drove through from seventh on the grid to take fourth place ahead of Alex Tagliani.

Power and Bourdais were not the only current IndyCar drivers in the field that day. The other two familiar faces were Simon Pagenaud and Graham Rahal, who finished the race further back in the eighth and ninth places respectively.

What should I look out for this weekend?

In last Saturday’s Bommarito Automotive Group 500 at Gateway Motorsports Park, Scott Dixon saw his lead in the championship once again trimmed by his closest rival Alexander Rossi. However, it was only by two points, with Rossi finishing the race in second place, just ahead of Dixon in third place.

Nevertheless, Dixon will be really hoping to end Rossi’s run of finishing ahead. The Chip Ganassi Racing driver will be wanting as much of a lead as possible heading into the finale at Sonoma Raceway, especially as the final race will see the drivers score double points; meaning that any potential hiccup for Dixon could be twice as costly.

IndyCar’s return to Portland will be somewhat of a step into the unknown, as it’s been at least ten years since many of these drivers last raced at the track. The cars have also changed dramatically in that time, so there is really no telling who could have any advantage over anyone else.

Despite the uncertainty, you have to put your money on the usual suspects rising to the top. Both Dixon and Rossi will be vying for the top spot, with the formbook potentially leaning toward Rossi as the favourite of the two, as he is the most recent winner on a road course having taken victory at Mid-Ohio.

The race will also be pivotal for Team Penske team-mates Will Power and Josef Newgarden. Power and Newgarden currently sit third and fourth in the standings and are really the only other two drivers still in mathematical contention for the championship. However, they are both still sixty-seven and seventy-eight points respectively off of the lead. If Power and Newgarden are able to score strongly against Dixon and Rossi, they could really play themselves into contention at the finale in Sonoma.

As the most recent winner in a Grand Prix of Portland, Sebastien Bourdais enters the weekend hoping that a potential victory could right some of the wrongs of his latter half of the season. The Frenchman won the opening race of 2018 back in St. Petersburg, with Sebastien having failed to reach the podium again since then.

His last race at Gateway was particularly dismal, with Sebastien failing to reach the end of lap one for the second year in a row. Any good results from here on will not help Bourdais much in the standings, but it would at least lift the spirits of himself and the Dale Coyne Racing team as they head into the off-season.

Finally, it will be interesting to see how Bourdais’ team-mates get on this weekend. Pietro Fittipaldi will again be back behind the wheel, coming off the back of an impressive drive at Gateway where he finished eleventh. There will also be a third Dale Coyne Racing Honda, with Santino Ferrucci somewhat controversially making his return to the series after having made his debut back in Detroit.

Santino will undoubtedly have many people watching him, waiting to see if he has changed his attitude on and off-track after receiving a two-race ban in Formula 2 before being fired by his team after a number of incidents at Silverstone including deliberate contact with his team-mate after a race.

Where can I watch the 2018 Grand Prix of Portland?

Tickets are still available for this weekend’s race. Head to the Grand Prix of Portland’s website for more information.

In the United Kingdom, television coverage is limited to just the races only. Race day coverage will start at 19:30 on BT Sport 2.

In the United States, television coverage for the race at Portland will be provided by NBCSN.

Further coverage of practice and qualifying will be provided for all via IndyCar’s YouTube channel and Facebook page.

How can I keep up to date with all the race action?

If you cannot make it to Portland for this weekend’s race, you can keep up to date with all the action across the weekend right here at The Checkered Flag. We will have coverage of not just this weekend’s practice, qualifying and race sessions, but for all on-track action throughout the season.