Alexander Rossi has taken a dominant victory in the 2018 Verizon IndyCar Series ABC Supply 500 at Pocono Raceway. The Andretti Autosport driver’s only real competition came from the pole-sitter, Will Power, but Rossi looked to have the better car underneath him when running in traffic, which ultimately made the difference when it came down to the closing stages of the race.

The event was somewhat overshadowed by a terrifying accident early on for Robert Wickens. The rookie, driving for Schmidt Peterson Motorsports, made contact with Ryan Hunter-Reay whilst the pair battled for position heading into turn two on lap seven, with Wickens being sent flying into the catch-fencing as a result.

Wickens’ #6 Honda disintegrated on impact with the fencing, with the survival cell around the cockpit thankfully remaining intact as Robert was sent into a high-speed spin through the air. His car flew over the top of Hunter-Reay, with Ryan’s roll-hoop and onboard camera being broken as Wickens passed overhead.

Thankfully, Wickens was awake and alert as he was extricated by the AMR safety team and transferred by air to a nearby hospital for further medical treatment. It was confirmed in the early hours of this morning that Robert was being treated for “injuries to his lower extremities, right arm and spine” and that he had also suffered a “pulmonary contusion”  (a bruise of the lung). Further updates are expected to be given later on today.

A near-two hour red flag period followed whilst the catch-fencing at turn two was repaired. Thankfully, the drivers were able to get back on track to complete the race, but Sebastien Bourdais took some convincing to get back in his car as the Frenchman was unhappy with the state of the repairs to the fencing. He admitted after the race that he was very reluctant to go back to racing.

Once the race got back underway, it soon became clear that it was a two-horse race for the victory. After a caution was displayed before the field reached turn one on lap one, Rossi executed a perfect restart to take the race-lead from pole-sitter Power before the red flag on lap seven. When the race got underway again, he began to check out.

Rossi would build a sizable advantage several times during the middle stages of the race, at one point holding a lead of almost nine seconds over Power. However, as the race entered the second half, Power started to come back into contention. Rossi struggled to put Matheus Leist a lap down, only being released on lap ninety-nine when the A.J. Foyt Enterprises driver pitted. Rossi’s lead had been more than halved during those laps, with Power getting ever closer after that.

It was during the pit-stops where Power seemed to gain the most ground. During the penultimate pit phase, Rossi was hindered by his team-mate, Zach Veach, who unlapped himself from Alexander and cost the race-leader time. A quick in-lap and a fast pit-stop from Team Penske was enough to get Power out into the lead of the race, but Rossi soon found a way back by when the tables turned and Power was bogged down by lapped cars.

In the final stint of the race, it came down to which of the two drivers could negotiate lapped traffic the best. Power lost a large amount of time to Rossi when he was caught out by Max Chilton right as he was about to make his final stop. From there, Power was able to reduce Rossi’s six-second lead a little bit, but not by enough to catch back up before the end of the race. 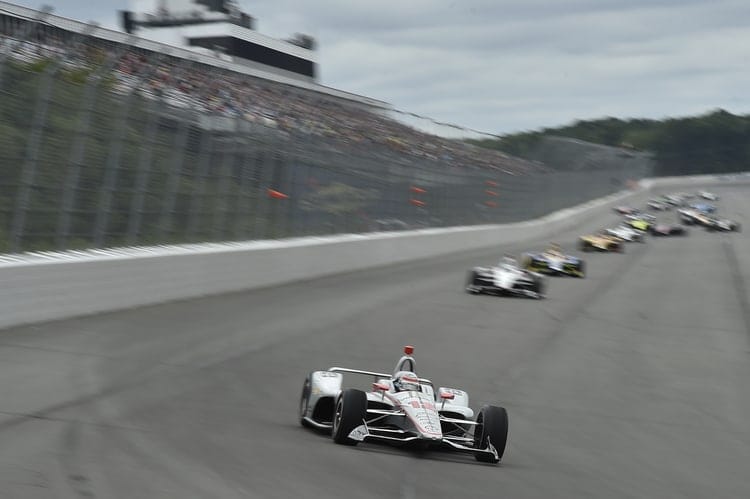 Ultimately, Rossi would come home to take the victory by just over four seconds ahead of Power. The win was an important one for both Alexander and Andretti Autosport; with Pocono being the team’s home event.

For Rossi, it was the first back-to-back victory of his IndyCar career – having won the previous race at Mid-Ohio – and it was also his second oval win; following up his maiden victory back in 2016 at the Indianapolis 500. He also led a staggering one hundred and eighty laps of the two hundred lap race distance; such was the pace of his #27 Honda.

With Rossi taking the win, Will Power’s hopes to take a third consecutive Pocono victory ended. Nevertheless, it was a fantastic drive from Power, who was Rossi’s only challenger for the entire duration of the race.

Scott Dixon held off a late charge from Sebastien Bourdais to take a superb third place. It was great damage limitation from Dixon, who started the race way down in thirteenth and came within inches of being caught up in Wickens’ hard crash at the start of the race. Dixon now holds a reduced lead in the championship of twenty-nine points over Rossi, with Scott hoping to put an end to Rossi’s great run of form at the next race at Gateway.

Josef Newgarden started on the front-row alongside his team-mate, but he lost a handful of positions early on and was never quite able to recover. Such was the pace of Rossi and Power out front, Newgarden would finish a lap down despite taking fifth place.

It was an impressive performance by the rookie Zach Veach, who took sixth place after passing a number of cars toward the end of the race. His team-mate, Marco Andretti, would come home just behind in seventh place, having pulled off some fantastic overtakes during the course of the race. Simon Pagenaud would finish as the last driver one lap down on the leaders after taking eighth place for Penske.

Ninth place would go the way of Carlin‘s Charlie Kimball, who was the sole driver to finish two laps down on Rossi. It was a great comeback from the American, with Carlin most likely not expecting to have taken a top ten given their lack of pace in Qualifying on Saturday. Ed Carpenter would round out the top ten with an uncharacteristically underwhelming performance given his usual pace on ovals.

Matheus Leist spent much of the race running inside the top ten, but the Brazilian rookie would fall down in the closing stages to an eventual eleventh place finish. Ed Jones and Max Chilton would finish behind him in twelfth and thirteenth places respectively.

Graham Rahal was the last classified finisher in fourteenth place, with the American’s race being doomed from the start after running into the back of Spencer Pigot as the field came to the green flag. Rahal was given a two-lap penalty for the incident and would fall down another two laps during the race. Pigot initially returned to the race after repairs were made to his #21 Ed Carpenter Racing Chevrolet, but his team would elect to retire him after he completed enough laps to be classified above the drivers who crashed out early on.

Conor Daly and Tony Kanaan would retire later on in the race. Daly hit the wall late in the event and was forced to pit due to damage. For Kanaan, it was a much earlier exit after a throttle sensor issue saw him lose power in his #14 Chevrolet.

The remaining five retirements all came during the huge wreck on lap seven. Wickens and Hunter-Reay were obviously eliminated as they were the cause of the accident. James Hinchcliffe came to grief when he spun his car in avoidance of the wreck. He backed his #5 Honda into the wall and was then collected by the #19 Dale Coyne Racing car of Pietro Fittipaldi. Both drivers were taken to the medical centre for checks, but thankfully both were released with no injuries soon after. Hinchcliffe would depart the circuit immediately to go and visit his team-mate and friend, Wickens, in hospital.

Takuma Sato also fell foul of the wreck on lap seven. The Japanese driver was one of the first drivers to reach the accident and was unable to avoid the debris. He, too, was fortunately uninjured in the melee.

There is not long to wait until the Verizon IndyCar Series is back in action. Just three races remain until the champion is decided, with the fifteenth round of seventeen taking place this Saturday, August 25, at Gateway Motorsports Park. 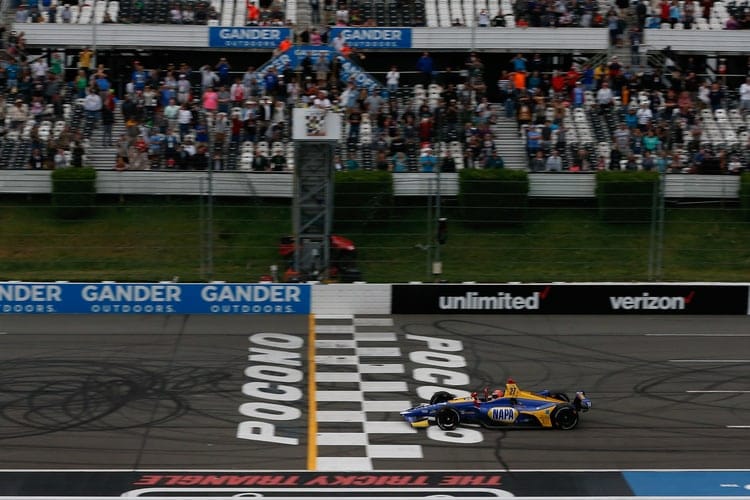