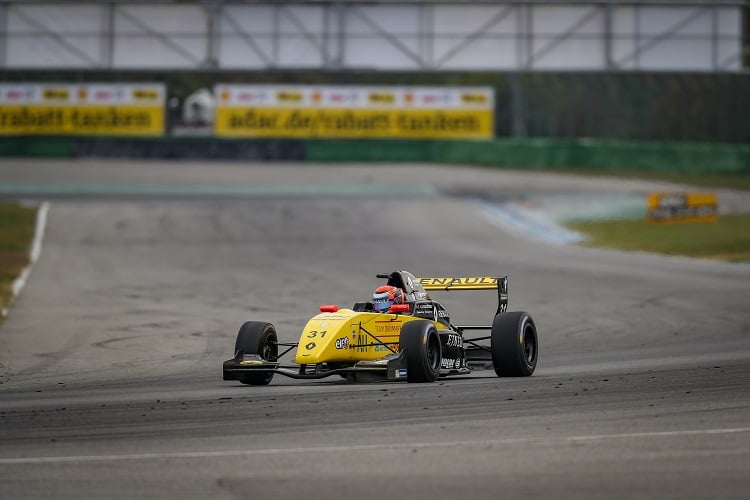 Christian Lundgaard will be looking to make amends from his opening race retirement after securing pole position for Sunday’s second race at the Hockenheimring.

The Dane headed into the penultimate weekend of the Eurocup Formula Renault 2.0 series in the lead of the championship but dropped to third behind Max Fewtrell and Yifei Ye after first lap contact with Victor Martins caused a puncture that saw him retire in the pits.

However, the MP Motorsport driver took advantage of the weather conditions in Germany to grab pole position for race two, thanks to being in the substantially faster second group on track after the session was affected by rain.

A late quick lap from Fewtrell had seen him top the opening group with a lap of 1:39.237, but the R-ace GP ace will start second on the grid thanks to Lundgaard’s lap of 1:38.080.  In fact, twelve drivers set a better time than Fewtrell in the second session thanks to having the better of the conditions.

Ye will start third on the grid for Josef Kaufmann Racing, meaning the leading trio in the championship line-up in the top three positions, albeit in a different order to their championship positions, while Alex Peroni will start fourth for MP Motorsport ahead of his fellow Australian Oscar Piastri of Arden Motorsport, who will be gunning for a second podium of the weekend after finishing third behind Fewtrell and Ye in race one.

Hill ironically had the faster time of the NEC quartet but because he finished fourteenth in his group, he will start behind his former team-mate Ghattas, who was twelfth in his group.