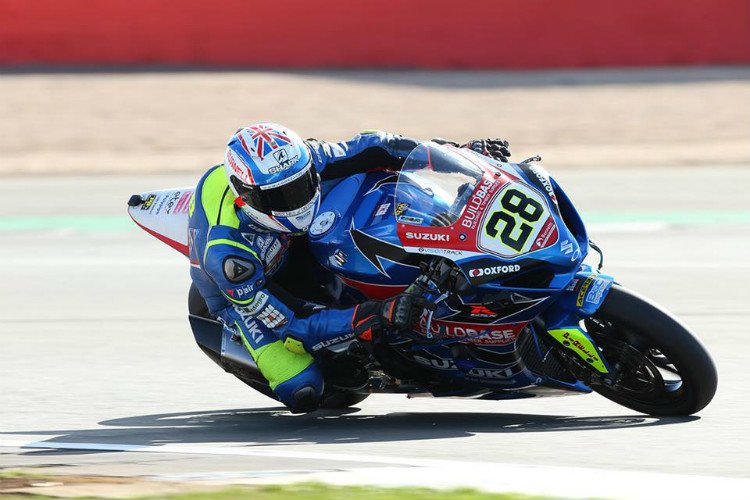 The Buildbase Suzuki rider was able to control proceedings around the National Circuit, which was dry in some places and wet in others. Ray posted back-to-back laps early on in Q3, with his fastest lap-time being a 53.864.

Nobody was able to challenge the 21-year-old, with Jake Dixon slotting into second spot, +0.158s behind his rival. Ray and Dixon will be joined on the front-row by Be Wiser Ducati’s Glenn Irwin.

Tarran Mackenzie put in yet another impressive performance for McAMS Yamaha to qualify in fourth, with teammate Josh Brookes just behind him in fifth. The Yamaha duo are joined on row two by championship leader Leon Haslam, who will no doubt still be feeling the effects of his huge highside on Friday.

Luke Mossey is next up in seventh, and he will start the race alongside Richard Cooper and Jason O’Halloran.

As Q1 began it looked like a dry line was beginning to appear down the start/finish straight. Meanwhile, off the circuit, the Smiths Racing team were working frantically on Peter Hickman’s BMW as they searched for the perfect set-up.

The riders spent the first-half of the session adjusting to the tricky conditions, with the quickest lap-times coming in the final three minutes – once they had switched to dry tyres.

Q1 was eventually topped by Hickman, with Cooper and Haslam completing the top three. A number of top riders sneaked back into the safety zone as the flag came out, including Glenn Irwin, who slotted into 18th.

The remaining riders all began Q2 on dry tyres, with a distinct dry line now on the circuit. There was immediate drama as Michael Laverty’s chain snapped clean off his Tyco BMW.

Once again, the times began to tumble heading into the final couple of minutes. Everybody was pushing hard and it came at a price for Christian Iddon, who suffered a heavy crash going into Luffield. Hickman would also run straight off circuit as he pushed to get out of the elimination zone.

The clouds gathered over the Silverstone circuit once again as Q3 begin. Ray would set the benchmark on the first of the fast laps, posting a 54.001 lap-time, and would go even quicker the following lap – with a 53.864.

The only rider seemingly able to get close to Ray was Dixon, who survived a huge moment on his opening lap. Dixon would record a 54.004 to slot into second, but he was unable to make any further progress due to a mechanical problem with his bike.

Moments later, Brookes’ Yamaha also suffered from a mechanical, with smoke coming out of the back of his machine.

Glenn Irwin sneaked onto the front-row in the dying seconds, pushing Mackenzie down to fourth spot. Nobody was able to challenge Ray though and he took pole position for this afternoon’s race.

The opening race of the weekend is scheduled to start at 16:15 on Saturday afternoon.