The Round of 12 of the Monster Energy Cup Series playoffs came to a close in Sunday’s Hollywood Casino 400 at Kansas Speedway. Despite late success by Kevin Harvick, a pit penalty ultimately doomed him as Chase Elliott held off Kyle Busch and Kyle Larson to score his second win of the round and third of 2018.

Joey Logano started on the pole alongside Harvick. Chip Ganassi Racing team-mates Jamie McMurray and Kyle Larson were ordered to the rear with an engine change and backup car, respectively, as did Timmy Hill (engine change).

Logano led the race early, while Daniel Suárez was quickly involved in an incident with Alex Bowman that sent the former into the wall and forced him to pit twice. Bowman would later also hit the wall but continue on. After starting in the rear, Larson cracked the top twenty by lap 15.

As the race entered the 30-lap range, green flag pit stops commenced. During the cycle, Ross Chastain hit the wall but no caution came out.

On lap 56, William Byron‘s engine failed, resulting in a yellow flag. Following cleanup for the fluids leaked from Byron’s car, pit stops began as Ryan Blaney took two tyres to win the race off the pits, while Ricky Stenhouse Jr. stayed out to become the leader.

The race resumed on lap 64 as a poor restart dropped Stenhouse from first and Blaney to his position. Logano took the lead on lap 72 and pulled away to score the stage win ahead of Harvick, Blaney, Kyle Busch, Paul Menard, Aric Almirola, Clint Bowyer, Erik Jones, Jimmie Johnson, and Elliott. With his finish, Harvick secured a spot in the Round of 8.

Stage #2 began on lap 86 as Logano led the way. After a battle with Blaney, Harvick took second.

Harvick distanced himself from the field as he scored the stage win. Blaney and Logano finished behind him, followed by Elliott, Kyle Busch, Larson, Jones, Johnson, Bowman, and Truex. Busch and Logano clinched Round of 8 spots with their stage finishes. 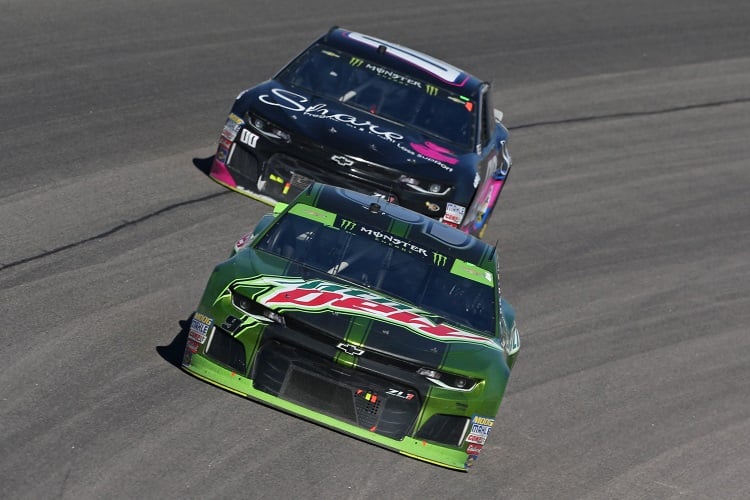 Harvick won the race out of the pits ahead of Elliott, while Denny Hamlin received a speeding penalty.

Stage #3 began on lap 167 as Harvick continued to lead. Behind him, Elliott, Blaney, and Larson fought for position. Meanwhile, Kurt Busch, seeking to advance to the next round, found himself in a precarious position as he was a lap down and outside the top twenty.

On lap 203, Blaney brushed the wall and began slipping, dropping him below the cut line. Larson pitted on lap 211 as other drivers followed. When Harvick pitted on lap 215, he saw his race hopes disappear when he was penalised for being too fast on pit road.

Keselowski took the lead until he went to pit road on lap 223, giving the place to Elliott. Kyle Busch and Larson ran second and third, respectively.

Busch began to close the margin, eventually reaching his rear bumper with less than ten laps to go.

With three laps remaining, Elliott was able to stave off Busch’s charge to push forward. Busch was unable to recoup the distance as Elliott pulled away for his third win of the season. Larson finished third, ahead of Jones, Truex, Keselowski, Blaney, Logano, Bowman, and Almirola.

Despite their top tens, Blaney, Keselowski, Larson, and Bowman were eliminated from playoff contention.

“Did all we could today just came up a couple spots short! Hopefully we can close the year with a win or 2!” Larson tweeted.

The Round of 8 begins at Martinsville Speedway with the First Data 500. Kyle Busch is the defending winner.

By Justin Nguyen
1 Mins read
After failing to qualify for the 2021 Daytona 500, Noah Gragson will get another shot in the 2022 race with Beard Motorsports.