After a year of misfortunes and other bad luck, Aric Almirola has finally broken through to reach Victory Lane. In Sunday’s 1000Bulbs.500 at Talladega Superspeedway, Almirola and his Stewart-Haas Racing team-mates dominated. On the final lap, Kurt Busch‘s hopes of a win were dashed as Almirola took advantage to score the win.

Busch started on the pole alongside SHR team-mate Clint Bowyer. David Starr, who was attempting to make the first Cup start for Obaika Racing, failed to qualify.

After just three laps, David Ragan pulled to the garage with engine problems. The top eight was dominated by SHR and Hendrick Motorsports cars as Busch led the way.

On lap 11, Jeffrey Earnhardt spun in the tri-oval to bring out the caution. Busch and Bowyer won the race off pit road as Michael McDowell received a speeding penalty. The restart took place on lap 15 as the SHR stable continued to lead, eventually being joined by the Team Penske trio of Brad Keselowski, Joey Logano, and Ryan Blaney.

Paul Menard made an unscheduled stop on lap 17. Keselowski also suffered from issues of his own as he experienced a vibration, forcing him to pit on lap 41 and fall a lap down. Busch scored the stage win ahead of Bowyer, Kevin Harvick, Almirola, Logano, Blaney, Chase Elliott, Denny Hamlin, Alex Bowman, and Ty Dillon.

Between stages, Elliott pitted before the others as he was running low on fuel, which resulted in a penalty for pitting too soon. Meanwhile, a strong stop by Blaney pushed him to the lead, while his Penske team-mate Keselowski remained a lap down as Corey LaJoie received the free pass.

Stage #2 began on lap 61. After three laps, Jimmie Johnson spun and hit the inside wall to bring out the caution. Most of the leaders pitted to add fuel, with Harvick and Busch occupying the front row as McDowell was penalised for speeding again.

The restart occurred on lap 67. Harvick and Kyle Busch battled for the lead before the former won and the SHR cars pulled into the top four once again. As the four ran single file, they and a number of other cars began to separate from the field.

On lap 103, Kyle Larson spun on the backstretch after his left-rear tyre went down; despite suffering some damage to his front, he did not hit any cars. Various drivers pitted as Menard received the free pass.

With two laps left in the stage, the green flag waved. The SHR domination continued as Harvick led the way, with Bowyer, Kurt Busch, and Almirola behind. Following the SHR drivers were Hamlin, Blaney, Kyle Busch, Austin Dillon, Logano, and Keselowski.

The leaders pitted before Stage #3, with Daniel Suárez beating them out of the pits. Some drivers like Keselowski, William Byron, Jamie McMurray, and Darrell Wallace Jr. stayed out as the first two took over the front row. Others like Ragan, Johnson, and Erik Jones received penalties during their stops.

Stage #3 commenced on lap 115 as Keselowski led. After a lap, McMurray suffered a pass-through penalty for forcing Menard down the double-yellow line on the backstretch. Byron took the lead on lap 123 before losing it to Keselowski four laps later.

McMurray spun in the tri-oval and hit the wall on lap 136. Following stops, Kurt Busch was back in front and took the green flag on lap 142. The SHR and Penske cars eventually separated into the inside and outside lines, respectively.

A caution for a tire in the infield came out on lap 160. The race resumed five laps later as the SHR stable continued to run strong. With two laps remaining, Bowman got loose and came down, where he bumped into Jones and slid back up the track as J.J. Yeley hit him. Byron was spun in the ensuing chaos. 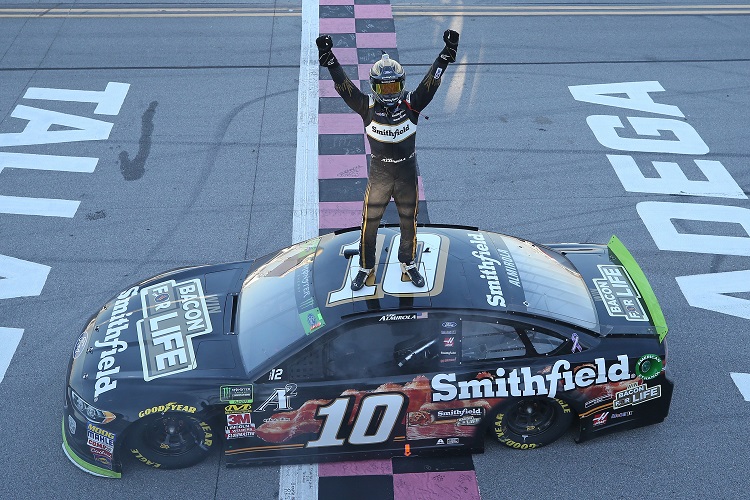 The wreck resulted in overtime as everyone stayed out, many running on low fuel. On the final lap, Matt DiBenedetto was turned and hit the wall, though no caution came out. In turn four, Busch ran out of gas from first, which Almirola capitalised on to pull in front and score his first win since the 2014 Coke Zero 400.

Bowyer finished second to lock an SHR 1–2 finish, while Busch fell to fourteenth. Amid the chaos of the final run, Harvick plummeted to twenty-eighth.

“We did it! We’ve been close so many times this year & we finally brought home the win today,” Almirola posted on Twitter. “Can’t thank everyone enough for believing in me & giving me a chance. What a day this was! So proud and humbled to be moving onto the Round of 8 in the #NASCARPlayoffs!”

Next week, the Cup Series travels to Kansas Speedway for the Hollywood Casino 400. Martin Truex Jr. is the defending winner.