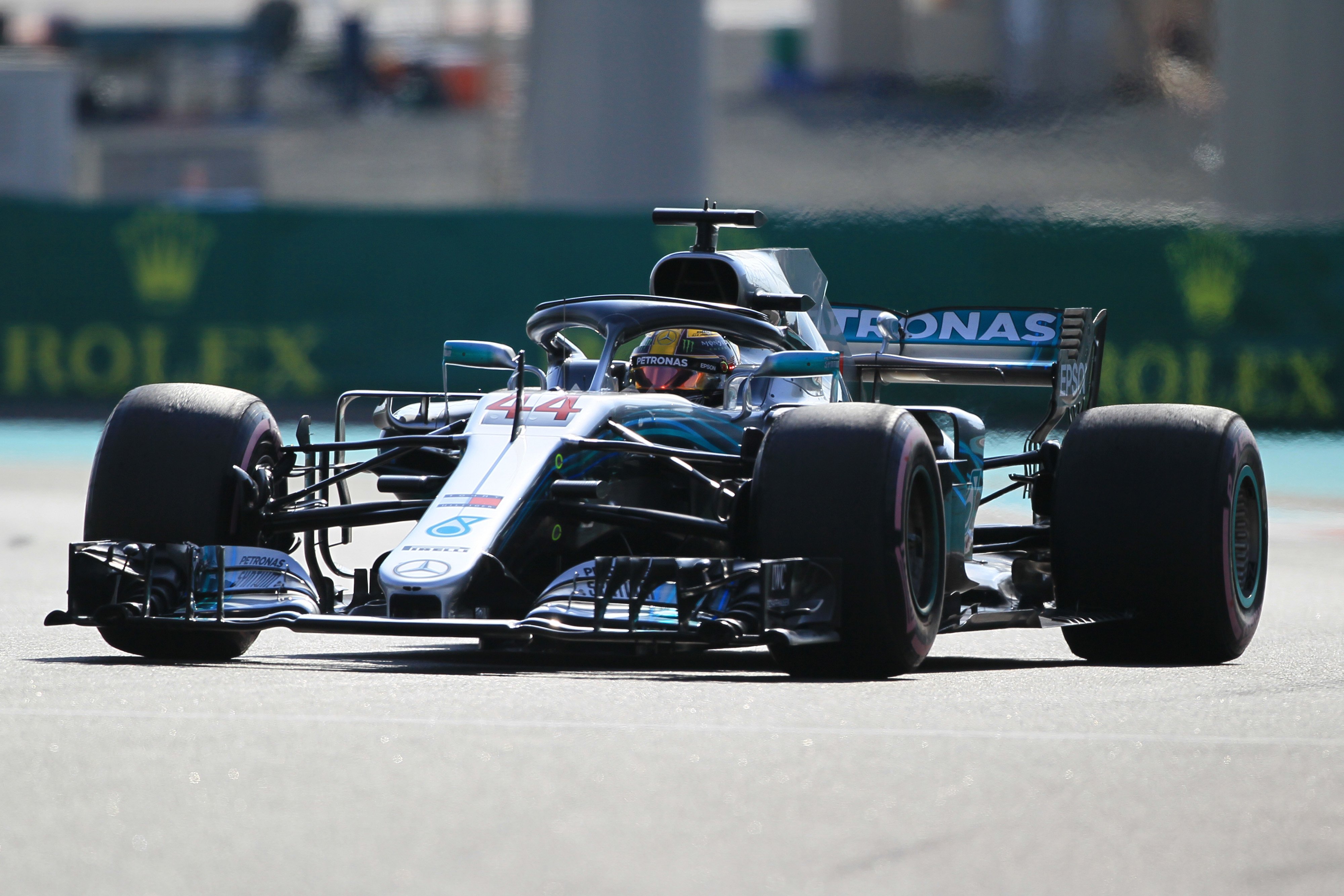 Lewis Hamilton secured the 83rd pole of his career as Mercedes locked out the front row. Credit: Octane Photographic Ltd.

Recently crowned five-time champion Hamilton had set a time of 1:35.295 on hypersoft tyres on the first runs in the Q3 shootout, but a small mistake at Turn 8 allowed Sebastian Vettel and Hamilton’s team-mate Valtteri Bottas a realistic shot of claiming pole.

But on his final lap, Hamilton shaved 0.205 seconds off his time through Sector 2, and improved his lap time by half-a-second to post a 1:34.794 to take his fourth Abu Dhabi pole and 83rd of his career.

Bottas improved his own time and fell just over a tenth short of matching Hamilton, while Scuderia Ferrari’s wait for a front-row slot in Abu Dhabi contiunes, as Vettel and team-mate Kimi Räikkönen secured third and fourth.

Daniel Ricciardo continued his record of never being out-qualified by a team-mate in Abu Dhabi, as the Australian pipped Max Verstappen to fifth in his final race for Aston Martin Red Bull Racing.

Of the top six, only Verstappen will not start on the favoured ultrasoft tyres, the Dutchman being forced into making an hypersoft run late in Q2.

Romain Grosjean was best of the rest for Haas F1 Team, with Ferrari-bound Charles Leclerc following up seventh in Brazil last time out with eighth on the grid.

Esteban Ocon took ninth in his final grand prix for the foreseeable future for Racing Point Force India, with Nico Hülkenberg rounding out the top-10 for Renault Sport Formula One Team.

After hauling the McLaren F1 Team car through Q1, Fernando Alonso was the slowest of all in the 15-minute second segment of qualifying. The Spaniard was 2.0s slower than Hamilton’s benchmark, and will have the Racing Point Force India of Sergio Pérez company on the seventh row for his 312th grand prix start.

Fernando Alonso will start in 15th in what could be his final grand prix.
Credit: Octane Photographic Ltd.

Carlos Sainz Jr. was the first driver to miss out on a Q3 slot, by the narrow margin of 0.018s, with Ricciardo being advised to abort his lap once the Renault driver had missed the cut.

Marcus Ericsson had the legs of Kevin Magnussen to take 12th, as both their respective team-mates advanced to the shootout for pole position.

In an attempt to start the race on the more durable ultrasoft compound tyre, the leading teams all tried to set their best lap using the purple-marked Pirelli rubber.

Despite having a time good enough to advance to Q3 on the prefered ultrasoft tyres, Vettel completed a lap on the hypersofts late in the session, meaning both he and Verstappen will start the race on the softer, but less durable compound.

In a tight-ending to the first 18-minute segment of qualifying, Pierre Gasly was seven-tenths up on a time he needed to advance through to Q2, but rounding Turn 20, the penultimate corner, his Red Bull Toro Rosso Honda  emitted smoke from the rear.

The Frechman limped across the line, and pulled off soon afterwards. To compound his misery, team-mate Brendon Hartley out-qualified him in 16th place, as opposed to 17th for Red Bull-bound Gasly.

Stoffel Vandoorne became the first driver since Nelson Piquet Jr in 2008 to be ‘white-washed’ in the qualifying head-to-head against his team-mate. The Belgian could only manage the 18th quickest time, which meant Alonso’s run of out-qualifying the 2015 GP2 champion stretches to 26 grands prix.

Sergey Sirotkin got the better of Williams Martini Racing team-mate Lance Stroll, the Russian narrowly pipping the Canadian by 0.047s.

At the top of the timing sheets, hypersoft-shod Vettel took the segment, with a best time of 1:36.755, with Bottas and Hamilton both within half-a-tenth of the Ferrari.