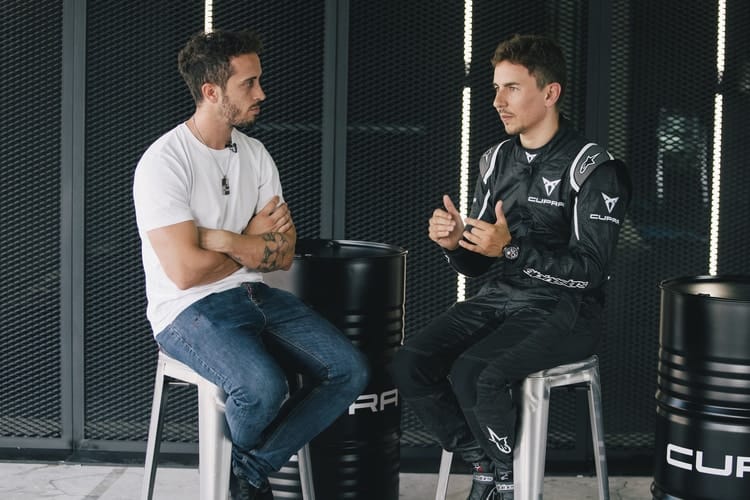 Ducati MotoGP riders Andrea Dovizioso and Jorge Lorenzo sat down together after getting behind the wheel of the Seat Cupra e-Racer.

Three months ago the pair, who are Cupra ambassadors, got behind the wheel of the TCR for the first time.

At the Castellolí track near to the brand’s facilities in Martorell, they took on the challenge of the e-Racer.

Lorenzo after completing a number of laps, said: “It’s a very unique car. For example, one thing that was surprising is that it has no rear-view mirrors. Instead, it’s equipped with cameras that relay the image from behind and at the sides to the interior of the vehicle.”

Having not yet driven the e-Racer, Dovizioso was keen to learn from his team-mate how it compared to the TCR they had tested previously.

“What about handling,” said the Italian. “I remember that the Cupra TCR was very agile, allowing us to push harder when taking curves.”

Dovizioso, also asked the two-time MotoGP Champion how it felt to drive an electric car with the latter impressed by the acceleration compared to the TCR with the e-Racer.

Lorenzo also compared the sound to ‘the buzzing of a mosquito’.

The pair also discussed whether the future of motorcycle racing lies in electric engines.

Earlier this year Dorna and the FIM announced a new series called MotoE, which is set to launch next year at Jerez and will support five MotoGP rounds in total.

Both felt that electric is the way of the future, however feel by the time the technology is likely to be at its best (making the batteries weigh less for example) they will not be racing anymore.