Go Fas Racing has signed Corey LaJoie to drive its #32 Ford for the 2019 Monster Energy Cup Series season, the team announced Thursday at the NASCAR Hall of Fame.

“I’ve always respected Archie [and] Mason (St. Hilaire) and everyone at Go Fas Racing because they are constantly building their race team better every year,” LaJoie stated in a team release. “I’m glad to be part of that continued growth for 2019 and look forward to getting on track and being in a position to show more of my potential.

“The most success in my career has been behind the wheel of a Ford from the ARCA and K&N series so I’m ready to jump into that mean looking Ford Mustang this season. Also, some of my best results in the Cup Series have been with (crew chief) Randy (Cox) on the box. There couldn’t be a better guy to lead our team!”

LaJoie spent the 2017 season splitting the #72 TriStar Motorsports car with Cole Whitt. In twenty-three races in 2017, he recorded a best finish of sixteenth at Las Vegas Motor Speedway in the fall as he finished thirty-fourth in points. With Whitt’s retirement from NASCAR racing in November, the #72’s 2019 driver has not been revealed. 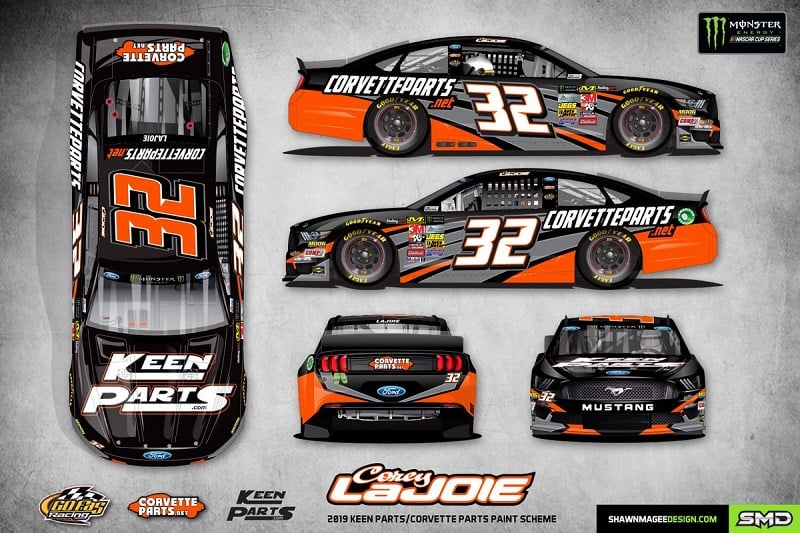 The 2012 K&N Pro Series East runner-up and son of Xfinity Series champion Randy LaJoie, LaJoie began competing in the Cup Series in 2014 with a two-race slate for Randy Humphrey Racing. Two years later, he joined BK Racing to run all but four races of the 2016 schedule, during which he scored his best career finish to date with an eleventh at Daytona International Speedway in July.

“Every year we feel like our program takes a step forward and securing Corey should help us continue to move that direction,” Mason St. Hilaire said in the release. “We’ve learned and grown a lot in our time in the Monster Energy NASCAR Cup Series and I believe our results reflect that growth. We’re very excited about the potential our team has this year.

“Every year we’ve been able to improve our program in different areas, and we fully believe that this coming season will be no different. Corey is a driver we’ve kept our eyes on for several years and he’s impressed and delivered when given the opportunity. We think he’s a great fit for our program and can’t wait to get this season underway.”

LaJoie replaces Matt DiBenedetto in the #32 after DiBenedetto departed the team for Leavine Family Racing. CorvetteParts.net and Keen Parts will remain as sponsors, while Schluter Systems, which has sponsored LaJoie throughout his career, will join him at GFR.

In addition to signing LaJoie, GFR intends to use a pit crew from Team Penske.

By Justin Nguyen
1 Mins read
After failing to qualify for the 2021 Daytona 500, Noah Gragson will get another shot in the 2022 race with Beard Motorsports.