Max Chilton and Carlin renew partnership ahead of 2019 IndyCar season

The team also confirmed that Chilton’s 2018 team-mate Charlie Kimball would be returning to the team for 2019, but only on a part-time deal instead of full-time.

Today’s news means that Chilton will embark on his fourth consecutive IndyCar campaign with his backers. It will be the second year of his partnership with Carlin, with the team aiming to make further steps toward the front of the competition after their debut season in 2018.

“I couldn’t be happier to formally announce that Gallagher will be back for the 2019 season partnering with myself and Carlin. Gallagher and Carlin are like family to me and I’m excited to see what we can do together building on both partnerships,” said Chilton in today’s announcement.

“Our first year together as an INDYCAR team had its ups and downs, but the potential and growth that we showed as a team was obvious to everyone. I want to say a massive thank you to Gallagher for their continuing support of me. To have the opportunity to represent the nearly 30,000 employees of Gallagher, a brand that focuses so heavily on teamwork and innovation, is a true privilege.”

It would be fair to say that Chilton’s time in the IndyCar series has not gone entirely the way he might have hoped. Making his debut with Chip Ganassi Racing in 2016, Chilton would score eight top ten finishes over the course of his two years with the front-running squad. Most notably, Max would score an excellent fourth place in the 2017 Indianapolis 500 after leading the race late in the running.

For 2018, it was announced that Chilton would be reuniting with Carlin, the team that he had previously been a part of when racing in the GP2 Series and other championships earlier in his career. Joining former Chip Ganassi team-mate Charlie Kimball, the pair would have a troublesome first year with Carlin as the team found their feet in America’s premier single-seater championship. 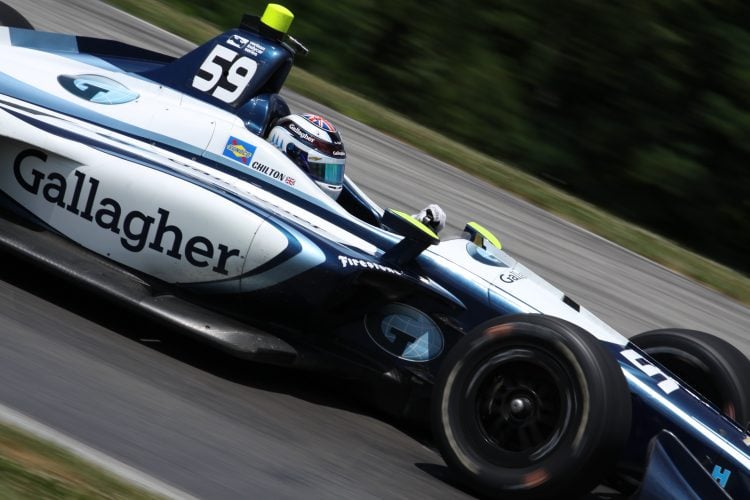 Despite early teething problems, Kimball would score six top ten finishes over the course of 2018, including a best-finish of fifth-place on the streets of Toronto. Chilton, however, would have a much more difficult time. The British driver did not manage to break into the top ten during the season, instead, scoring a best finish of eleventh place at the second race of the Duel in Detroit.

Chilton’s defeat by his team-mate Kimball did not seem to hurt the British driver’s chances of re-securing his seat for 2019, however. Since the 2018 championship drew to a close, it has seen a matter of “when” not “if” Max would be announced for 2019.

Trevor Calin, the team principal, stated today that he was “confident” of the partnership between the team, Max and his sponsors Gallagher heading into 2019 and that he was hoping that they could move to “the next level.”

“Our first year in the series was a great learning experience for the whole team and we’re thrilled that Gallagher is back on board for our second year. Gallagher started this journey with us and we’re just so thankful that they share our passion for success and really believe in both us as a team and Max’s ability to represent their brand,” said Carlin.

“We’re confident that our second season in the series will be even better than the first and we’ll be able to push our partnership to the next level.”

Alongside the announcement of Chilton today, Carlin did confirm that Charlie Kimball would be returning to the team for 2019. However, unlike Chilton, Kimball would only be racing part-time instead of full-time.

Like Chilton, it had been expected that Kimball would be returning full-time in 2019. Given that the American frequently produced better results than Chilton in 2018, today’s news does seem a little surprising. Further details on Kimball’s 2019 plans are due to be published soon.

The 2019 NTT IndyCar Series will kick-off with the season-opening Grand Prix of St. Petersburg on Sunday, March 10.

By Justin Nguyen
3 Mins read
In 2022, Hélio Castroneves will race full-time in IndyCar for the first time since 2017 for Meyer Shank Racing. Conversely, Jack Harvey will leave the team, with his replacement yet to be named.
IndyCar

By Griffin Schmoyer
1 Mins read
Top Gun Racing are set to make their IndyCar race debut next month, with R.C. Enerson once again behind the wheel.