For a brief time, 2018 looked like the year it had promised to be. The year that McLaren F1 Team fans could finally emerge from behind their sofas when watching Formula 1. The continued presence of Fernando Alonso, an improving Stoffel Vandoorne and to go with their ‘incredible chassis’ (play along), a new power unit.

The 2015 reconciliation with Honda, 23 years after their last double act, ended in a terrible way. Both parties at war, struggling for points, finishes and any justification of staying with each other. The 2017 Singapore Grand Prix weekend saw a sweet release. Honda and McLaren were to part ways, the Japanese to focus on an affiliation with Red Bull – starting with Toro Rosso – and Renault Sport stepped in to aid McLaren’s progress up the grid. An effective swap deal.

It had prized possession Alonso in all smiles. Until the chance to turn a wheel arose. Less than half a day into winter testing in Barcelona, the Spaniard found himself in a gravel trap with three wheels on his MCL33, losing valuable time to repairs and cold weather.

There was something positive to remember, however, as Alonso’s time on a quiet, sleety day at the Circuit de Barcelona-Catalunya marked the first time that a McLaren topped the standings in a test for four years.

The MCL33, decked in full papaya orange with metallic blue accents, did not have the easiest development and creation phase. Due to the lateness of the move to Renault customer units, McLaren and technical director Tim Goss had to rethink some solutions in order to house the new power unit. Compromises were made in a process that “was little bit out of the ordinary”, according to Goss.

On the surface, the car looked to be underdeveloped. But the Australian Grand Prix – and the emergence of a new aerodynamic package – seemed to bat away any thoughts. Alonso and Vandoorne narrowly missed out on making Qualifying 3 in Melbourne, but race day brought better fortunes.

Solid race pace and a good strategy propelled Alonso to fifth, his best result since the 2016 United States Grand Prix, and prompted yet another dig at Honda over the radio come the chequered flag: “Now we can fight”. Vandoorne also picked up points, his first top ten finish for six races. 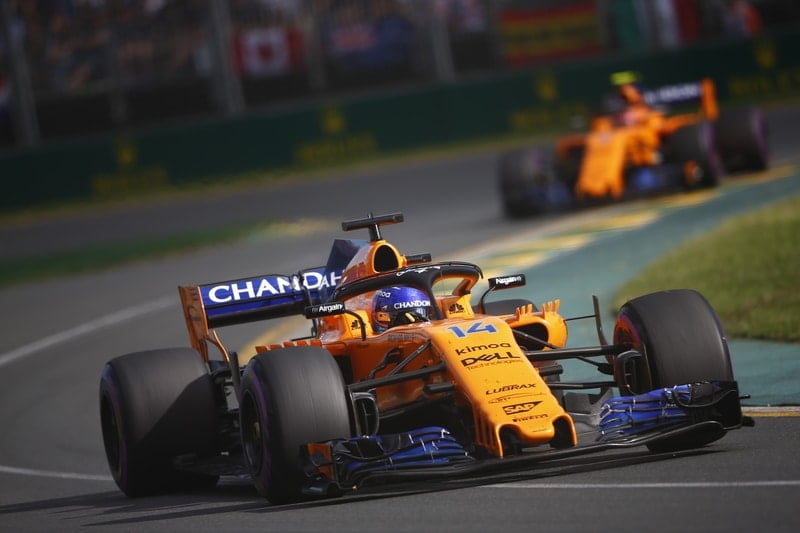 Alonso’s seventh place in Bahrain two weeks’ later moved him, astonishingly, into the top four of the Drivers’ Championship for the first time in his second spell with McLaren. Two more seventh places in China and Azerbaijan left the happier Alonso on 28 points after four rounds. However, in the remaining 17 rounds, he could only muster 22 points. It was as good as it was going to get.

The Spanish Grand Prix also saw Vandoorne start a run of 14 races without a points finish, a dismal spell that has ultimately cost him his Formula 1 career – for now. His lack of performance did raise questions, and it transpired that his car was not equal to Alonso’s when comparing data at the British and German weekends. A chassis rebuild was conducted, but produced little better.

It prompted the Belgian to voice his frustration after a terrible home Grand Prix at the Circuit de Spa-Francorchamps, bemoaning that McLaren “hasn’t progressed at all” in 2018. He faces a rebuild of his own in ABB FIA Formula E and as a simulator driver for Mercedes AMG Petronas Motorsport.

Alonso also chipped in having seen his top ten finishes become a more intermittent outcome. Six retirements in nine races included three in a row at Monaco, Canada and France – the latter just a week after he helped the #8 Toyota Gazoo Racing car to victory at the 24 Hours of Le Mans.

The Spaniard, now disillusioned with McLaren and Formula 1, said that the team understood their problems but turned “70%” of their attentions to 2019 and a lack of upgrades ensured that ’18 was to stay at a very stagnant level. His last points finish of the season – and maybe his last in Formula 1 –  came in Singapore with a typically resolute drive.

Before the summer break, a change of personnel at the head of the team played out. Early in July, racing director Eric Boullier tendered his resignation and was replaced by Gil de Ferran. Alonso had worked with de Ferran in preparation for his first shot at the Indianapolis 500 in 2017 and obviously liked what he saw.

Formula 1’s tour of the Americas brought a change in fortune for Vandoorne. The Mexican Grand Prix saw the 26-year-old finally break his six month wait for a point. Too little, far too late though.

In Abu Dhabi, Alonso did his best to salvage one more point with a loose interpretation of track limits to no avail. If it was his last appearance in a Formula 1 race, the last five years are not the way to remember a double world-champion – a man who would probably have taken the title to the wire – or even won it – in a Scuderia Ferrari car, let’s say.

Is it a permanent farewell to F1 from Alonso? Credit: Sam Bloxham – McLaren Media Centre

Indeed, the last two years are not a true reflection on Vandoorne’s capabilities. Having seen Sergio Pérez and Vandoorne fall short of expectations despite their obvious talent, McLaren and CEO Zak Brown are attempting to prevent the same thing happening with their two new young recruits.

The pair in question are Carlos Sainz Jr. and Lando Norris. Sainz Jr, fully freed from the Red Bull programme after Pierre Gasly’s promotion to Aston Martin Red Bull Racing from Red Bull Toro Rosso Honda, is embarking on a totally new experience. At the age of just 24, Sainz Jr. is to be the effective ‘team leader’ for the first time in his Formula 1 career. Will he have better fortunes than the man he’s replaced, his idol no less? Having squared up to Max Verstappen well at Toro Rosso in 2015 and the start of ’16, the big deficit to Nico Hülkenberg at the Renault Sport Formula 1 Team came as a surprise. A committed worker and quick driver, McLaren must give him a car to show his worth.

He’s joined by McLaren junior graduate Norris. Tipped as the bookmakers’ favourite to win the FIA Formula 2 championship, Norris could only manage one win in a solid, if unspectacular, first season in the series. In Free Practice outings for McLaren across 2018, the 19-year-old Bristolian has looked assured behind the wheel and it will be interesting to see how he matches up to Sainz Jr.

Both drivers reported that the car felt stable in the Abu Dhabi post-season tyre test, but the timing screens showed that pace is still lacking. Not the greatest combination. As popular as it would be, a win still looks far away from McLaren. They blamed the Honda engine in the past, what now?