Marcus Armstrong Fastest in Day One of Formula 3 Testing 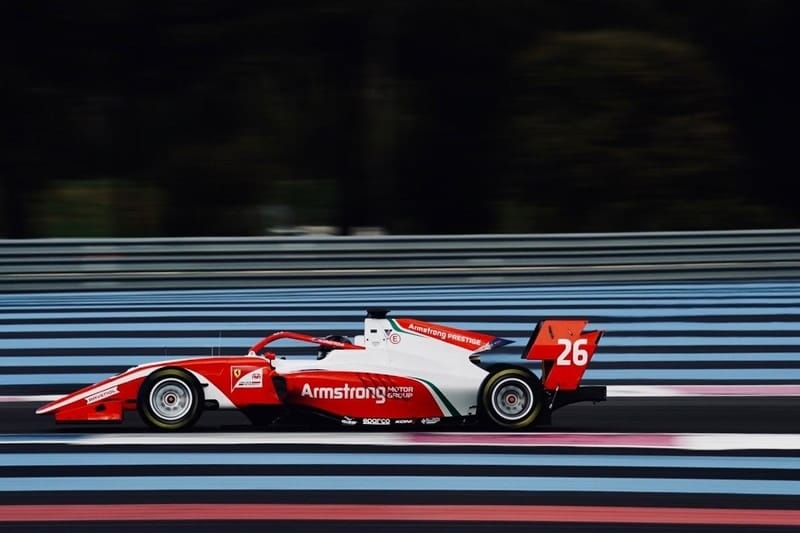 Running got underway in the morning by Trident trio, Niko Kari, Pedro Piquet and Devlin DeFrancesco as they set about putting in their installation laps.

The pack followed suit with all cars having tested the French track in the opening thirty minutes.

The ART Grand Prix driver managed to find some extra pace to break into the 1m51s before a red flag halted proceedings for a technical assessment.

The second red flag of the day was brought out after Richard Verschoor and DeFrancesco after the MP Motorsport and Trident drivers stopped at Turns 1 and 7 simultaneously.

With running restarted, Lundgaard and Pulcini dipped into the 1m50s with the Dane on top.

A two hour lunch break followed, with proceedings resuming with Andreas Estner getting the running underway.

The early pace was set by Jehan Daruvala before a brief red flag was called due to Saegeant having stopped at Turn 7.

At the half way  point, Yuki Tsundoa claimed the fastest time ahead of Sebastian Fernandez and Liam Lawson.

Just before another red flag for Vips having also stopped at Turn 7, Armstrong pumped in his first to be quickest.

In the dying stages, Zendeli moved into second whilst Shwartzman found extra pace to take third at the flag.

Day two of testing will start tomorrow at 9:00 am local time.

By Joe Ellis
2 Mins read
Aleksandr Smolyar made his decisive move early on and he took that all the way to the chequered flag as he won the first F3 race of 2021.
Formula 3

By Joe Ellis
1 Mins read
Hauger holds the advantage ahead of this afternoon’s qualifying in Barcelona.