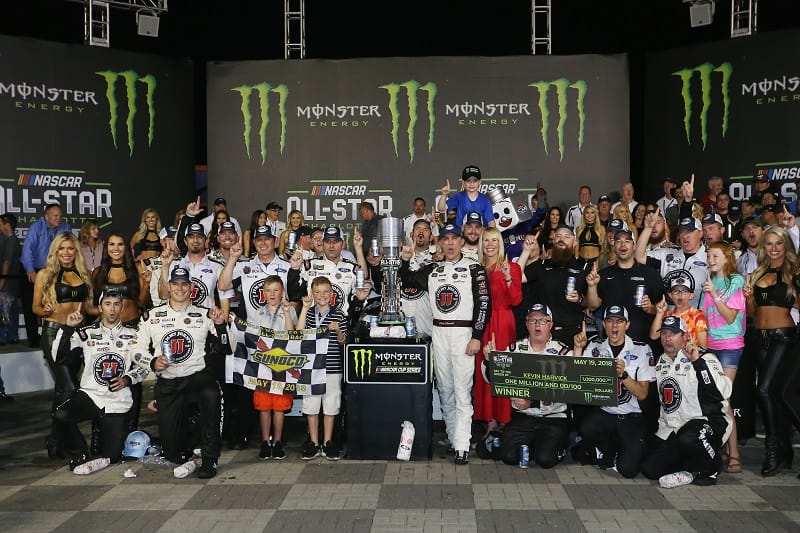 On Wednesday, NASCAR revealed the format for the 2019 Monster Energy NASCAR Cup All-Star Race in May. In addition to the race length being updated, changes include edits to the car setup that may appear in the Generation 7 car scheduled for 2021.

The race will be split into four stages of 30, two 20, and 15 laps; the final stage is five laps longer than in 2018. Over the first three stages, all laps will count regardless of flag conditions across the first three stages, while the fourth stage will only count green-flag laps. Standard overtime rules apply to Stages 1–3, while Stage #4 must end under green.

On the technical side, the All-Star cars will feature a carbon fiber splitter/pan to address sensitivities in ride height and stabilising the aerodynamics, allowing for better performance when racing in traffic. The cars will also have a radiator exit duct through the hood to isolate engine temperatures from aerodynamics.

“Throughout its history, the Monster Energy NASCAR All-Star Race has provided a platform to try new and innovative ideas, some of which we have incorporated on a full-time basis,” NASCAR Executive Vice President Steve O’Donnell stated. “Last year’s All-Star rules package resulted in one of the most exciting All-Star races in history. With a similar package and added elements that we could see in the next generation race car, we expect another must-watch event.”

To compete in the All-Star Race, a driver must have won a points race during the 2018 season or in the 2019 races leading up to the event. Former All-Star race winners and series champions who are currently competing full-time are also eligible to race. Those who do not meet either criteria must use the Monster Energy Open to advance to the All-Star Race, which is accomplished by winning any of the Open’s three stages or the Fan Vote.

By Justin Nguyen
1 Mins read
Kurt Busch’s Pocono concussion will now force him out of the #45 23XI Racing Toyota for the final two races of the regular season at Watkins Glen and Daytona. Ty Gibbs remains in the car.
NASCAR Cup Series

By Justin Nguyen
2 Mins read
Ryan Blaney will remain with Team Penske for many seasons to come as he signs a multi-year contract extension.
NASCAR Cup Series