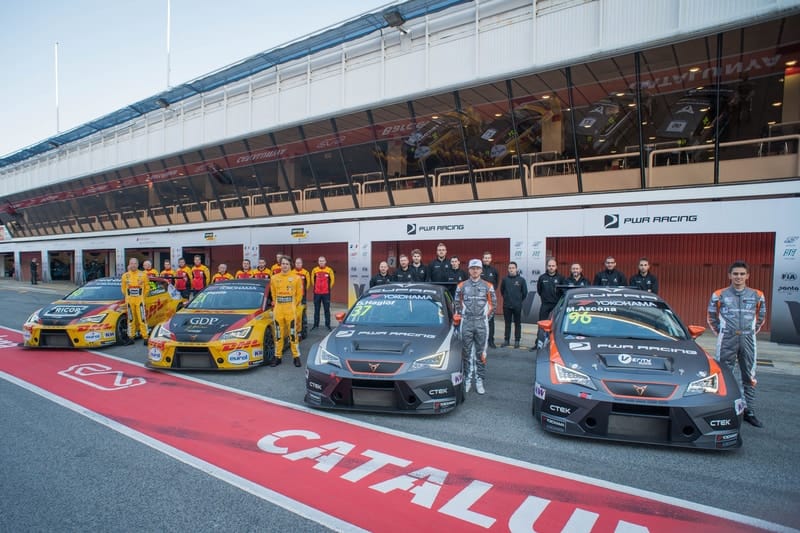 It’s all change for Cupra in 2019, with the Spanish marque being represented by two new teams, and four new drivers compared to last year.  But, will these wholesale changes spark better results for Jaime Puig‘s brand?

Last season, results were far from ideal. Aside from Pepe Oriola (who was one of the stars of the 2018 WTCR season), the other three Cupras of John Filippi, Norbert Nagy and Zsolt Szabo rarely featured in the points-paying positions.

The teams involved with Cupra last year, Campos Racing and Zengo Motorsport, have consequently not returned. Campos Racing’s decision to close down its touring-car operations in favour of open-wheel commitments has left Oriola having to jump ship and join Hyundai in the TCR Asia Series. Filippi, meanwhile, will be racing in TCR Europe with a brand new Renault Megane.

As for Zengo Motorsport, their plans for the 2019 season are not quite so clear. The popular Hungarian outfit attempted to get back on the WTCR grid with a pair of Peugeot 308TCRs, however those plans never quite materialised.

So, having parted ways with all of their partners from 2018, who will be representing Cupra this year?

The first team to sign up to the season for the Spanish marque was Comtoyou Racing; the Belgian squad which campaigned a quartet of Audis last year. Francois Verbist’s team haven’t strayed from the four rings in 2019, but instead have been forced to scale down to just two RS3 TCRs as a result of the new WTCR brand quota.

The quota states that no more than four cars from each brand can be represented on the WTCR grid, and with Team WRT having already signed up to compete with two Audis for Jean-Karl Vernay and Gordon Shedden, Comtoyou Racing found themselves looking for a second brand to compete with to keep Aurelien Panis on the grid in 2019.

The answer came in the form of Cupra; Audi’s fellow brand within the Volkswagen Group. In fact, beneath the RS3 body shell, the Audi shares the majority of its internal parts with the Cupra, ensuring a seamless transition for the Comtoyou Racing engineers between the two vehicles.

Having struggled at the beginning of the year, Panis showed a promising level of improvement over the course of 2018, finishing the season with a best result of fourth place at Wuhan. If Panis can maintain his level of progression as a young driver, the Frenchman should be a fairly consistent points-scorer for the Spanish brand.

Joining him at Comtoyou Racing is the driver known as “The Showman”. Tom Coronel is one of the most experienced drivers on the WTCR grid, and also one of the most well-connected to his fans. The Dutchman endured a tough 2018 season behind the wheel of a Honda, but the former race-winner will be hoping for better form with a new team, and new car.

Alongside Comtoyou Racing as the second of two Cupra teams are Scandinavian graduates, PWR Racing. Team owner/driver, Daniel Haglof will guide his relatively new team along the way for their first ever international racing season in 2019. Haglof doesn’t fit the usual team-owner/driver stereotype however. The 40 year-old Swede is a driver worthy of the touring car World Cup, having finished third in the Scandinavian touring car championship standings last year.

Partnering Haglof will be reigning TCR Europe Series champion, 22 year-old Mikel Azcona. Having competed in a Cupra last year with PCR Sport, Azcona takes over from Oriola as Cupra’s resident high-profile Spaniard. Although he still has much to prove, Azcona has the potential to become one of the sport’s top stars in years to come. Plus, by sticking with Cupra, Azcona will ensure some mechanical consistency in his promotion to the World Cup, which shall hopefully help him to adjust to the top tier of touring car racing.

Team managers, Francois Verbist and Daniel Haglof, got together recently to discuss the upcoming season for Cupra.

“It is fast and reliable”, said Daniel Haglof, explaining why his PWR team chose to race with Cupra this year.

“I think it’s the way it adapts to different tracks.” Verbist explained further, “Some cars are good on some tracks, but I think the Cupra is in a good balance in all the tracks around the calendar. So I think that, to compete in the championship, the Cupra is a really good option.”

Regarding the growth of the WTCR as a whole, Haglof said: “I think it´s a massive success!  It’s a great platform with TCR regulations and many brands. On top of that there’s the strong and experienced promotion by Eurosport.”

Verbist continued, “The WTCR is making a huge step ahead compared to last year and what’s been done before, so for me it’s the championship to be in at the moment. I’m happy to be here because we can see that we are in the best year of the category.”

As for what the teams can expect to achieve in the forthcoming season, Verbist is realistic about his team’s chances: “We aren’t really title contenders, but we are looking for points in every race. If we don’t have an issue with our drivers scoring points they need to take I think it won’t be surprising for us to be in the top five at the end of the year.”